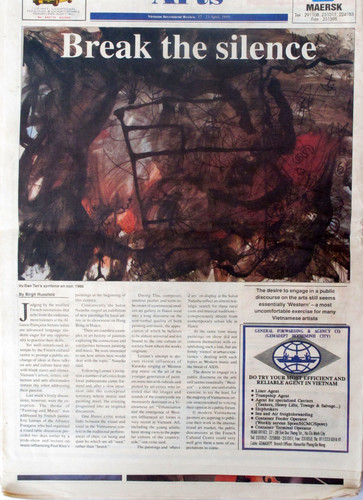 An article by Birgit Hussfeld in Vietnam Investment Review, 17-25 April, 1995. It was a review on the exhibition 'Music' at Salon Natasha and its related activities.

The group exhibition ‘Music’ was organised to encourage artists to explore the relationship between art and music, and hence to express visually their euphoric perceptions. Such interrelation had been established in the West in the late 19th Century, where artists experimented with the spiritual connection of art and music. Vietnamese artists, on the contrary, were rather negligent to such correlation even by the late 20th Century, when ‘Music’ was presented. Vu Dan Tan, among all the participating artists, was the one who had been constantly going back to explore the connections between colours, sounds, music, and visual arts, out of his personal interest in classical music.
With such specific artistic concern, ‘Music’ could be seen in relations to the painting performance at ‘Le Trio d’Argent’ concert, which was initiated by Salon Natasha in the following year 1995.
A conference on the relationship between music and art also took place on the occasion of the exhibition. It was organised by Salon Natasha in Hanoi at the French Cultural Centre and Alliance Française.
The participants of the exhibition includes: Do Minh Tam, Le Hong Thai, Le Tuan Anh, Eric Leroux, Geoff Dorn, Bui Viet Dung, Maritta Nurmi, Alain Bailly, Mai Chi Thanh, Tran Thieu Quang, Truong Tan, Lana Sundberg and Vu Dan Tan.