Two Articles Regarding the Construction of the New Cultural Centre at Tsim Sha Tsui, 兩則有關興建尖沙咀文娛館的報導

Clipping from Wah Kiu Yat Po published on 13 July 1977. There are two articles regarding the construction of the new cultural centre at Tsim Sha Tsui. The first article, titled 'The Former Kowloon Station Impossible to be Preserved Entirely', is about the likely demolition of the former Kowloon Station and the possible preservation of the clock tower. The second one, titled 'The New Art Museum in the Cultural Centre is Expected to Open in 1982', is about the establishment of a new museum of art in Hong Kong and its collection acquisition. The clipping was found in a Kodak box titled 'Hong Kong Museum of Art 1977' by Ha .

Two Articles Regarding the Construction of the New Cultural Centre at Tsim Sha Tsui, 兩則有關興建尖沙咀文娛館的報導 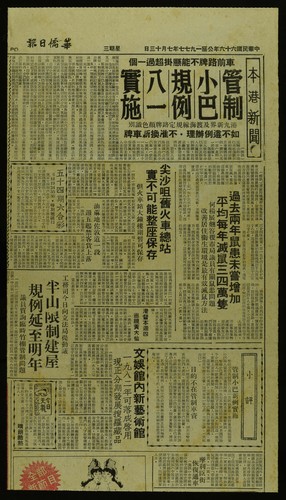