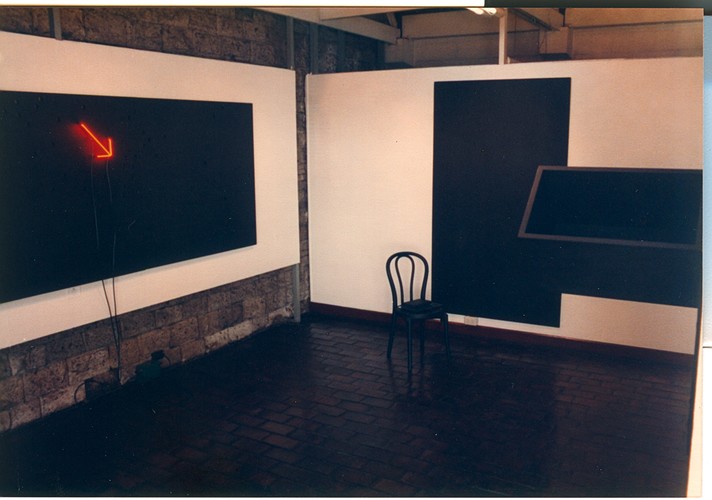 Photograph of one of the works in Roberto Chabet's solo exhibition, 'Other Planets,' at West Gallery from 13 - 27 August 1993.

Chabet wrote, 'Between space as idea — in its fullness and emptiness, limitless, infinite — and space as fact — palpable, tangible, graspable — is a region of uncertainty and indeterminacy, doubt and ambiguity. Here reside myth, metaphor, allegory.

Pitch-dark, black on black, the exhibition sets up a chance encounter between the commonplace (a plastic chair), the arch (six parade drums, six parade drums too many), the absurd (a crowbar), and the impertinent (neon), and insinuates that between idea and fact lies fiction - more truthful than idea, more real than fact.

The title alludes to the exhibition's astronomy-related imagery and derives specifically from the eponymous work, which is a fond setup of Pluto, the farthest, the least known and the least lit planet. The work itself is a take-off on the usual textbook depiction of Pluto as one miniscule arrow-pointed dot of light lost in a swarm of millions in dark space. The piece underscores a sub-text of distance and otherness that prevails in the show.

The exhibition, in its sparseness and thought-through pictorial logic, also takes a glance back at Chabet's early, very reductive black and white paintings — the viewless windows, the blank walls, the empty tables - still lives for the modern times now seen from a perspective of thirty years, a distance near-galactic.'