This is the catalogue of the exhibition A Night of Elephants by Hiroshi Sunairi at the Hiroshima City Museum of Contemporary Art in 2005. The motif of elephant came from the Western saying, 'Elephants never forget'. In dealing with the 'memory' and 'oblivion' of the Hiroshima A-Bombing, the artist found this saying to be a revelation. For the exhibition, the artist collected Hibaku objects (remaining objects from the time of the atomic bombing) from the citizens of Hiroshima and presented these objects as 'traces' and 'memories' of the tragedy. Also included in the exhibition was a metal cage in the shape of an elephant filled with an enormous amount of leaves and branches of Hibaku tress. In the elephant's feet, the trunks of Hibaku trees were inserted. Thus, the audience could observe the immensity and the weight of 'memory' from the amount of leaves and branches, as well as 'time' depicted by the withered trees. Artist biography is provided at the back of the catalogue.
Access level

Chapter headings
a Ticket to Hiroshima 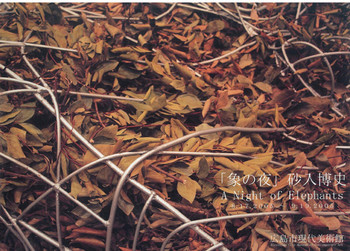