Published to coincide with the exhibition of the same title by Buen Calubayan at Ateneo Art Gallery, Quezon City, Manila. This catalogue includes texts by various contributors, as well as a list of artworks with details and the exhibition layout.

'Biowork is the terminus of the biography works that artist Buen Calubayan has been involved with in the past two years. His research and performative journey to Mt. Banahaw frames this exhibition, evidence of how intertwined his life and artistic practice is.

In this installation composed of painting, sculpture, performance, documentation and text, Calubayan lays bare his personal history, the demons of uncertainty about his art and chosen life and the means by which he confronted them. Biowork brings together the learning and realizations of past works and exhibitions, including his 2012 Ateneo Art Awards winning show Fressie Capulong where the assemblage of works accumulated became a cathartic experience for the artist and his 2013 Ateneo Art Awards shortlisted project Spoliarium that re-interpreted Juan Luna’s iconic painting. This project was the catalyst for his reconsideration of the significance of this masterpiece imbued with so much nationalistic significance that for Ilustrados signified equality with the colonial masters yet ironically reinforced their willingness to be judged by them; and led him to the search for an alternative aesthetic. Reynaldo Ileto’s Pasyon and Revolution, became his guide to the next stage of his artistic life and practice. Ileto’s “history from below” introduced him to the practices, beliefs and aesthetics of the “ordinary” Filpinos of the late 19th century, directed him to Mount Banahaw and led to the development of his current body of work.' — from Ateneo Art Gallery's website

Biowork - The Quest for the Color Green, Light and the Resurrection

Instructions on Viewing the Landscape 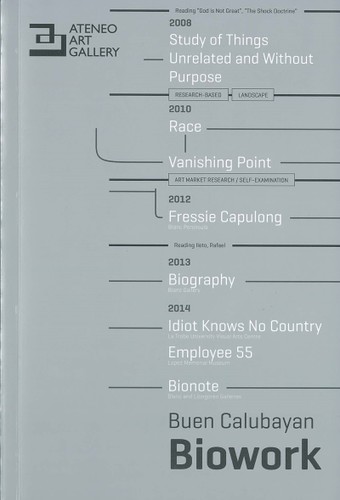