This publication is produced in occasion of the solo exhibition of the same title of Chinese artist Cheng Ran at Galerie Urs Meile from May to July 2013.

'The exhibition features a new body of works ranging from different media, such as literature, photography, video and installation. The title of the show draws its inspiration from the novel of the same name by the American writer Steffan Postaer. Cheng Ran moves between various visual languages, presenting interior worlds in an exceptionally poetic way – his artistic approach creates a subtle ambiguity that lies on the fragile relationship between visual language and text, time and space.
This exhibition centers on an original novel written by the artist, called Circadian Rhythm. During the time of the exhibition, a wooden structure in the shape of a spiral is installed in one of the gallery spaces, where the audience can read the novel in an environment that at first sight may seem unfamiliar, delivering at the same time the sense of a “reading room”. The leitmotifs of the novel are converted into objects realized in different media that develop into "non-existent" chapters and paragraphs, while the real space and the spiritual world interchange and support each other. In addition to this 150,000-character novel, excerpts from the book are handwritten on a collection of waste paper Cheng Ran collected in Amsterdam, Iceland, and at l’Ile de la Réunion in Africa, such as train tickets, concert tickets, receipts, etc. Different stories attached to this unusable paper and its origin consequently interweave, opening up a sequence relating to time and space.
One of the main video installations featured in the show is the single-channel video The Last Sentence (2013, single-channel video, color/sound, 15’), which was produced by Cheng Ran in Iceland. It displays unusual natural sceneries and elements on the road, in combination with conversations and music on the radio. In post-editing, the artist selected and rearranged dialogues from the classic movie Gone with the Wind (1939) as off-screen narration. Reality and virtual sound intertwine with the images, thus becoming ambiguous.
Throughout the exhibition, ready-made objects and artworks that have been altered by the artist take the audience into a parallel world. The structure of an imaginary hotel that includes lighting, wooden ornaments, and vintage key chains creates an alternative space, displaying those objects collected by Cheng Ran. Another arch-like construction hosts a series of drawings by anonymous artists in the Seventies found in flea markets in Amsterdam – once removed from the original context and displayed in the installation recreated for the show, the function of these objets trouvés is enhanced, thus giving a new dimension to these items. The artwork The Last Generation (2013, New Zealand pure wool manual embroidered carpet, 272 x 192 cm) weaves the opening section of Circadian Rhythm into a carpet. The artist takes as a reference the first paragraph of A Tale of Two Cities (1859) by Charles Dickens and turns each original sentence into its semantically negative meaning.' - from gallery's website.

Includes a biography of the artist.
Alternative title 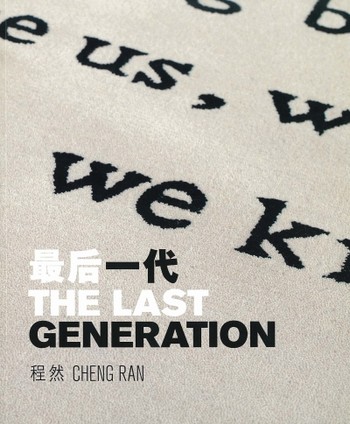 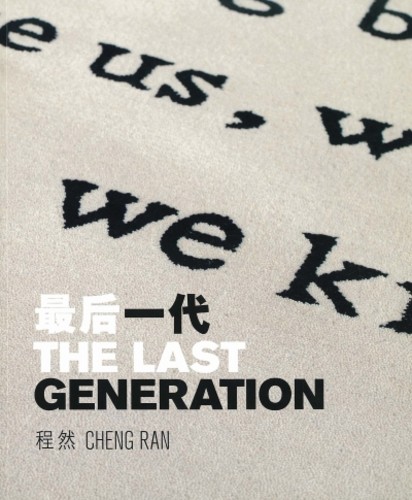