Fly with Me to Another World Project: Public Art In(ter)vention

Fly with Me to Another World, is an art project initiated by Navin Rawanchaikul, a Thai artist who was inspired by the journey of pioneer Thai artist Inson Wongsam. The Project was launched in 1999 and travelled to several international art spaces. Mirroring Inson's return to Thailand after years of experience abroad, Navin returned the Project to Lamphun in 2004, and prompted a year of collaborations between artists, grassroots groups and community members. Project activities ended in February 2005 with the international symposium Public Art In(ter)vention, in which Thai and international participants debated on issues surrounding 'art' and the 'public', drawing on their experiences and examples from their specific contexts.

The present publication with contributions from artists, critics, academics, curators, directors of art spaces and grassroots organisers, is a continuation of the Project in the form of an edited volume of writings. This book includes a video-documentary of the Project's activities and Symposium, along with interviews of Inson, Navin and collaborators in DVD format with sub-titles (CD.000549). The book also includes foreword by Jonathan Watkins, preface by Navin Rawanchaikul and Thanavi Chotpradit, and 'a conversation' by Nathalie Boutin.

Fly with Me to Another World Project (Thailand)

Anything is art... but can art be everything?

When Art Intervenes, Is the Public Invented?

On the Long March with Chinese Art: An Interview with Lu Jie

Outside of the Lines

The Vernacular in Contemporary Art?

Towards a New Regionalism

Sleepy Taro, or What is an Artist?

Public Space in Transformation: An Aspect of Strategic Models of Public Art Practice in Asia 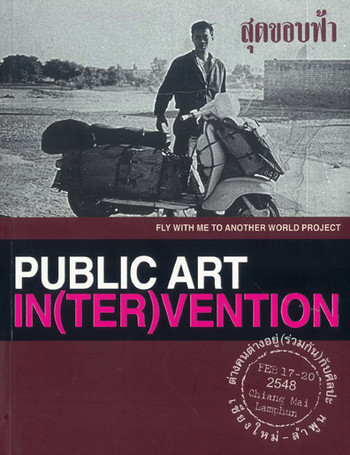 Fly with Me to Another World Project: Public Art In(ter)vention