'This notebook about the anti-Sikh pogrom that occurred in New Delhi in 1984 contains photographs taken by Gill in 2005, 2009, 2014 and 2019 alongside captions from the Indian print media in which they first appeared and text responses by forty one artists - including writers, poets and film makers. The photographs from 2005 appeared in Tehelka (with Hartosh Bal); and from 2009 in Outlook (with Shreevatsa Nevatia). The corresponding captions are roughly as they were inscribed in the published reports.

Suite of drawings by Gagan Singh. Endpiece drawings by Venkat Singh Shyam.' - from the artist's website

A Photograph is Not An Opinion: Contemporary Photography by Women 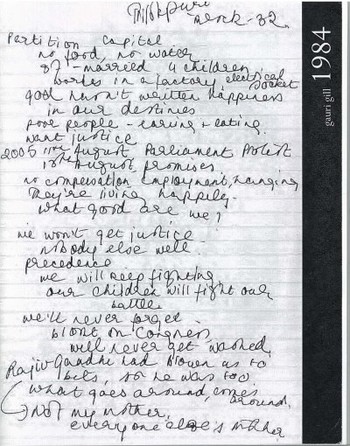