'Not only is there a boom in international art biennials, but they are also increasingly deployed for developing and marketing cities and regions. In order to compensate for this, political issues are more and more often put on the agenda. Can biennials really represent an alternative political voice? This extra anniversary issue of "Open" contains a number of lectures delivered at the debate on this issue in October 2008 in connection with the first Brussels Biennial. Together with supplementary texts, a "reader" has been created in which the biennial as a global phenomenon is analysed and approached not only in terms of an art theoretical discourse or curatorial practice, but also on the basis of more sociological and politico-philosophical points of view.' (back cover of the book)
With brief biographies of the authors.
Access level

Chapter headings
The Biennial: A Post-Institution for Immaterial Labour

Production and Distribution of the Common: A Few Questions for the Artists

Democratic Politics in the Age of Post-Fordism

From Medium to Message: The Art Exhibition as Model of a New World Order

Marks of Distinction, Vectors of Possibility: Questions for the Biennial

The Interscale : Art after Neoliberalism

The Making of 'Once is Nothing': How to Say No while Still Saying Yes?

Geo-Cultures: Circuits of Arts and Globalizations 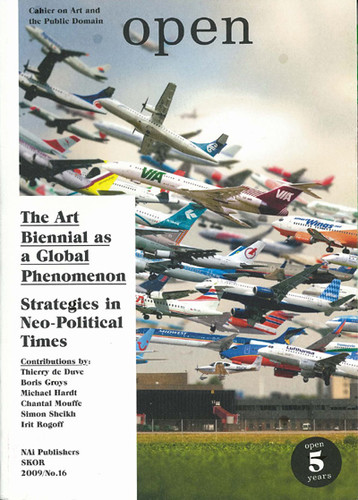