A booklet for the solo exhibition of the Thai artist Navin Rawanchaikul held in Mumbai in November 2011. Featured are a number of multimedia works by Rawanchaikul which explore his own ancestry and the genealogy of his identity.

Personal documentaries are included, such as excerpts of the artist's letter to his daughter, and a letter from the artist to his late mother. Also encompassed are illustrations done by his daughter, enriching the focus on the issue of identity of 'Places of Rebirth'.

Includes a curatorial essay and a biography of the artist.
Access level 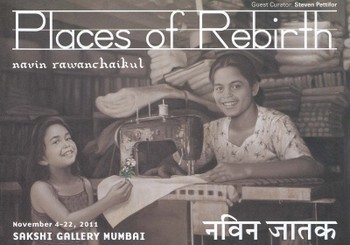