Rirkrit Tiravanija: A Retrospective (Tomorrow Is Another Fine Day)

This publication was originally conceived to accompany 'Rirkrit Tiravanija: A Retrospective (Tomorrow Is Another Fine Day)', a series of retrospective exhibitions that took place between autumn 2004 and summer 2005 at the Museum Boijmans van Beuningen in Rotterdam, the Musee d'Art moderne de la Ville de Paris/ARC, and the Serpentine Gallery in London. Ultimately this book did not accompany the series of retrospective exhibitions, but work proceeded with the aim of producing a visual catalogue raisonne of Tiravanija's practice.

Rirkrit Tiravanija thrives on the interactions between himself and strangers, friends new and old that he encounters on his travels. He insists that art should provide an occasion for geniality and sociability, an insistence that has enriched the environments he has traversed. This monograph is constructed as a "storyboard" comprised of images from every work produced between 1989 and the present day. In collaboration with the Paris designers M/M, Tiravanija offers us the most complete evaluation of his work to date, using as narrative backbone his numerous international retrospective exhibitions of 2004 and 2005 (at the Chiang Mai University Art Museum in Thailand, the Munich Kunstverein, the Boijmans van Beuningen Museum in Rotterdam, the Musée d'Art moderne de la Ville de Paris, and the Serpentine Gallery in London). As documentation, this book is an unsurpassed survey that demonstrates the conceptual unity of Tiravanija's seemingly disparate projects. Texts include written scenarios and scripts by the artist Philippe Parreno, the science fiction writer Bruce Sterling and by Tiravanija himself. Also included is a post-retrospective conversation between the exhibitions' curators, among them Hans Ulrich Obrist.

Chapter headings
Nothing - Gridthiya GAWEEWONG, กฤติยา กาวีวงศ์
The Process of Living in the World of Objects: Notes on the Work of Rirkrit Tiravanija - Maria LIND
The Holy Spirit - Rein WOLFS
...the end of the beginning of the middle... by Hans Ulrich Obrist with Molly Nesbit, Philippe Parreno, and Rirkrit Tiravanija
Sitcom Ghost - Philippe PARRENO
Yesterday Will Be Another Day - Bruce STERLING
The Artist Didn't Do It: Summer in the Park with Rirkrit - Rochelle STEINER
Treatment for a radio play - Rirkrit TIRAVANIJA, ฤกษ์ฤทธิ์ ตีระวนิช 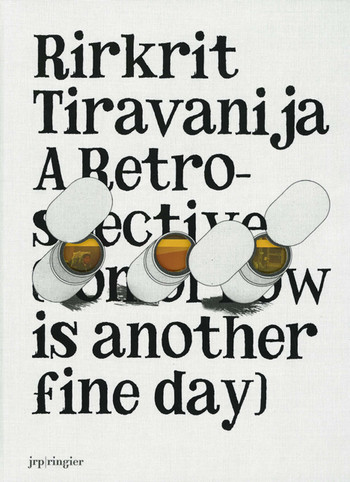 Rirkrit Tiravanija: A Retrospective (Tomorrow Is Another Fine Day)