'Japanese culture and art has always been in a close relationship with nature. In Japan, the word “shizen” was selected at the end of the 19th century as the most appropriate translation of the English word “Nature.” Originally, words such as “shinrabansho” and “tenchibanbutsu” had slightly wider connotations, referring to “all of creation,” including human beings. Incorporating not only the secrets of the universe, natural phenomenon and the changing of the seasons, but also human experiences and perceptions of these things, the Japanese concept of nature became merged with an animistic sense of religion to give rise to a unique form of culture and art. Looking back at Japanese culture from the past – from its traditional performance, architecture and painting, to its postwar movements, such as Mono-ha – it is possible to recognize countless insights not only into the relationship between the natural and human worlds, but also into the abstraction of nature and ideas of designing space with an awareness of creation as a whole.

'In this exhibition, we examine examples of Japanese contemporary art and design in order to explore the sensibility and collective cultural memory of the Japanese people in regard to nature. Three of Japan’s most interesting creators each make one large-scale installation, taking full advantage of the Mori Art Museum’s six-meter high ceilings and large galleries. The three creators are renowned designer/artist Yoshioka Tokujin and artists Shinoda Taro and Kuribayashi Takashi. The work of each incorporates reminders of natural phenomena and the nature-human relationship. Their approaches, which generally speaking are to reduce nature to an abstraction, resemble the traditional Japanese idea that nature should be felt, rather than rationalized. Viewers experience these large installations with their entire bodies in a way that awakens in them the traditional, direct sensory approach to nature. Thus, with this exhibition we hope to provide an opportunity to reconsider the way that the Japanese “sense nature.” T is in turn will provide hints to the question of what is unique about the Japanese and East Asian approaches to art, and will also constitute another step towards our goal of “redefining Japan.”' (from press release)

Antique nor Modern, but Timeless

Images and Boundaries: The Installations of Kuribayashi Takashi

The Establishment of the Concept of Nature in Modern Japan

The Call of the Wild: Tales of Marriage between Animals and Humans

Nature as Described in the Manyoshu 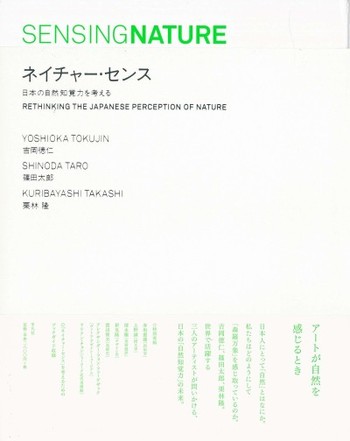