Grace Gut looks at the question of the audience in the Hong Kong artist's recent works.

In 2018, the Jockey Club New Arts Power, a programme presented by the Hong Kong Arts Development Council, held a multimedia arts exhibition titled After the Deluge at the Tai Hang Tung Storage Tank. The exhibition featured a light installation that turned the beams into waves, a spectacle that was positively received on social media, and ushered the artist Kingsley Ng into prominence. Three years later, the organiser held another cross-media event at the North Point East Pier called Before a Passage, once again with Ng as one of the participating artists. The two programmes were similar in nature: they introduced art into an everyday space, and drew from the characteristics of the venue for creative inspiration. These part performance / part exhibition / live art happenings were hosted twice by a semi-official art body in Hong Kong, perhaps a sign that this category of work is becoming popular amongst certain audience in Hong Kong, in particular those who have access to public resources.

Before writing this, I spoke with Ng to understand his ideas and the conceptualisation behind his work. Ng says that in 2016, he weaved together writer Liu Yi Chang’s Intersection (Tête-bêche) with the principle of a camera obscura in his work Twenty-five Minutes Older, and paid close attention to how “live elements” interacted with the site of the artwork.

From there, he became the lead artist for works including After the Deluge (2018), Secret Garden (2018), and Before a Passage (2021) in recent years. The works share the following five characteristics: 1) they take place in a space not traditionally meant for exhibitions; 2) they are site-specific installations; 3) there is a time limit on viewing; 4) the show contains performative elements; and 5) they are created by a team (not a single artist). These productions, which blend visual art and performance art, are not dissimilar to “live art”—they take over a public space, and emphasise the interaction with the audience. 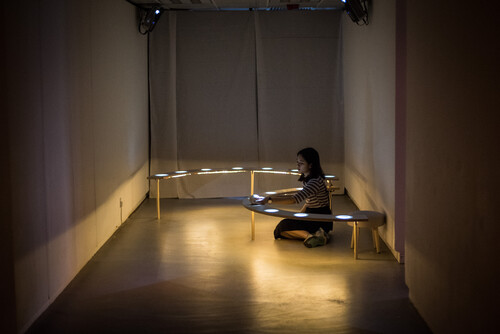 For background reading, I turned to his collection of works, Notes: Selected Works 2005-2016, Kingsley Ng. In the collection, Ng includes a quote from British art critic John Berger’s Bento’s Sketchbook: “There are two categories of storytelling. Those that treat of the invisible and the hidden, and those that expose and offer the revealed.” Ng does not want his own works to be too overt. He believes he should not tell the audience how the work should be interpreted, but that the work should offer ample space for the audience to draw connections with it through their own relationship with the city. Despite this, he admits that there are times when he has to accommodate the differences amongst the audience, and will offer rather obvious clues.

As the viewer, I understand that artists inevitably have to sacrifice a certain level of open-endedness, especially when it involves allowing the docent and staff to make verbal suggestions. The audience is not completely free to explore on their own; rather, it becomes a sort of scavenger hunt with a set goal. For works like this in a public space, the audience will usually be from a range of backgrounds—industry professionals and art lovers, hipsters and kaifongs. Some may need more guidance, while others would wish to explore on their own. But when they all gather to look at the same work, it’s unavoidable that there would be discrepancies between their expectations. Experienced art viewers may feel that the arrangements are too restrictive, whereas newcomers may be at a loss over what they are expected to do. I’m interested in exploring this topic in particular, the experience of the audience when interacting with Kingsley Ng’s works.

The Freedom of an Incomplete Experience

Secret Garden (2018) took place at the Hong Kong Visual Arts Centre, a former barracks for married British officers. The show makes references to the novel by British author Frances Hodgson Burnett, with staff playing the role of a guide, leading the audience into different rooms that have specific settings, and facilitate the interaction between the audience and the site-installation.

In the first room, glowing-stone-like ceramic spheres, laid along a configuration of wooden arcs, emit sizzling sounds. A guide put the ceramic spheres to his ears, inviting the audience to do the same. When it was time to move, the guide then gestured the audience to take the ceramic spheres with them as they left the building through a back door, walked through the dark woods with an installation of swirling spheres on the slope, and then returned indoors. A woman knelt before another set of arcs, lifted some other spheres, and triggered sounds by juggling them around inlaid sensors. That was when I realised I was supposed to have picked up the stone, carried it around with me, and ultimately trigger the sound. I wondered: if there had been no hints, and I did not lift the stone, or place it to the light source, what would be left of the experience? Did the audience have the freedom to experience an “incomplete” experience? 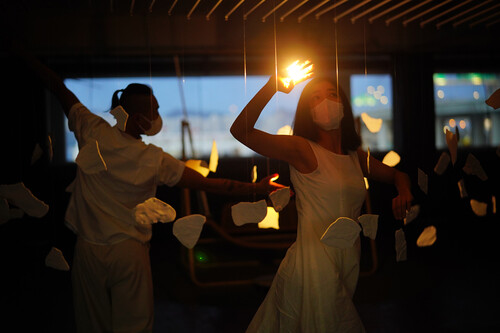 Overall it felt a little like being on guided tours on holidays—being ushered from one space to another, completing tasks at checkpoints according to an itinerary. Ng said that he hoped to admit more viewers to the venue at one time, so they would have to move to the next space within a set timeframe; he also jokingly referred to the viewing experience as “conveyor belt sushi.” “We would like them to be able to explore more freely on their own speed, but it was difficult to do that given the number of people and time we had.” That was why the work had a set route for viewing the art, and the guide served to lead the viewers through their experience, not only acting as crowd control but also avoiding a situation where the audience would miss the point. There was a limit to the level of exploration permitted, and if the audience could not figure out what to do in time, the staff would promptly give reminders, so that their experience would feel complete and the itinerary could continue smoothly. If there had been no time limit, or the period of exploration was longer, would the audience be able to figure out how the venue worked? Were the adjustments made truly to accommodate the different background of the audience, or were the compromises made because of the audience numbers and the limited viewing time?

Is the Art Happening?

Before a Passage (2021), which took place three years after Secret Garden, no longer set out a strict viewing path for audiences, but the question of whether “clues” should be given in the show came up again. For instance, there were shards of ceramics with embossed numbers, but there was nothing as explicit as “please dial the following number.” If some of the audience saw the pieces and were unable to figure it out, the staff would assist them. There was also a series of swings on site; many viewers thought it was for display only and did not realise that they could sit down and take a swing—in those cases, the staff would also give them clues as such.

In discussions about the work amongst local art critics, some criticised that art should naturally spark the curiosity of the audience, who would then seek out a path of exploration by themselves—to give explicit clues is seen as too direct. I found the framework of live art helpful in dissecting these discussions. “Live art” originates from the concept of “art happening”; American artist Allan Kaprow has said that in live art, the role of the audience should be active, to behave as though they are “participants.” According to his definition, art happenings are performances that are “presented to small, intimate gatherings of people in lofts, classrooms, gymnasiums and some of the offbeat galleries, where a clearing was made for the activities.”1 During the performance, everyone present as a performer. If the “audience” was not active, the space of the happening would be “a dead space.” Kaprow believes that creators should ensure those at the venue know what they are doing, and make preparations ahead of time—otherwise, “an audience is half-hearted or even reluctant, and sometimes the reaction is vicious and therefore destructive to the work.”2 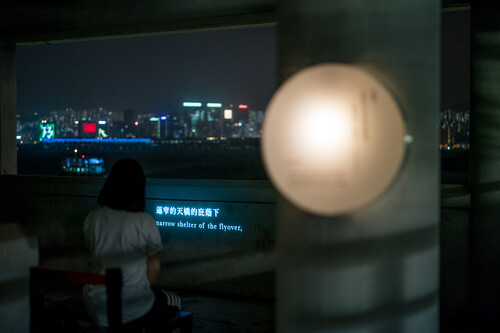 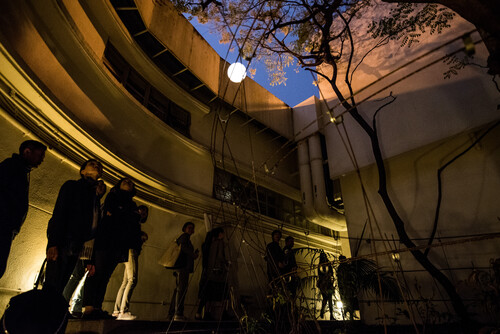 While this framework helps us understand some of the criticism levelled at Ng’s work, Ng considers his work akin to conceptual art, whereby he trusts that the audience can read their own meaning into the work. “We want to emphasise the role of the audience, but not so much so that there are no configurations at all.” Rather than “participating,” he hopes the audience could invest their own experiences in the devised frameworks and find their own meanings. For instance, in After the Deluge, Ng still remembers a mother and a daughter who came to the show. The daughter had insisted on taking the mother to the exhibition because she studied in a kindergarten in Tai Hang Tung as a child, and on rainy days her mother would tread through the rain and carry her to school on her back. Rather than communicating a certain message, Ng says that the value of creation is that the audience have the space to project their own experiences. “If the artist directs the narrative, then these extensions may be lost.” Instead, he creates a set and lays down mechanisms for the audience to project their own experiences, so that they could draw connections between the work and their lives. Perhaps the openness of these works does not lie in whether the viewing experience is rigidly controlled, but by provoking free and boundless thoughts and associations within a less-than-free environment. 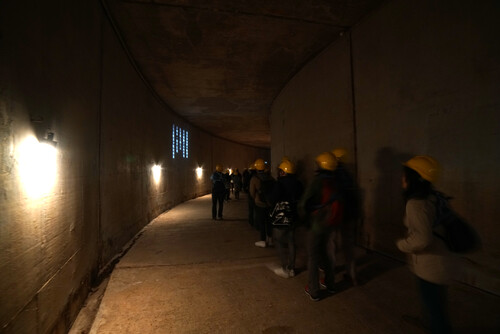 Image: Kingsley Ng, After the Deluge, 2018. Courtesy of the artist and the Hong Kong Arts Development Council.

Art is, above all, an experience. Ng says that the American educator John Dewey has been an important influence on his art, and that made him especially concerned with audience experiences. He is also inspired by the shared experiences of traditional rituals, festivities, and gatherings. Lived experiences can be a form of art. Participants all engage in the same set of actions, but they leave with different feelings and experiences. Ng’s art fluctuates between exhibition and performance, blurring the boundaries between the two. Between letting loose and giving instructions, freedom and constraints, I ask, would the work not appear ambiguous and awkward? Ng says, “These days, a lot of things are bound rigidly. We can try massaging these boundaries, and look for unknown possibilities.”

Grace Gut is an art critic from Hong Kong. She is the art and culture editor for Stand News (Hong Kong), and a writer for ARTouch (Taiwan). 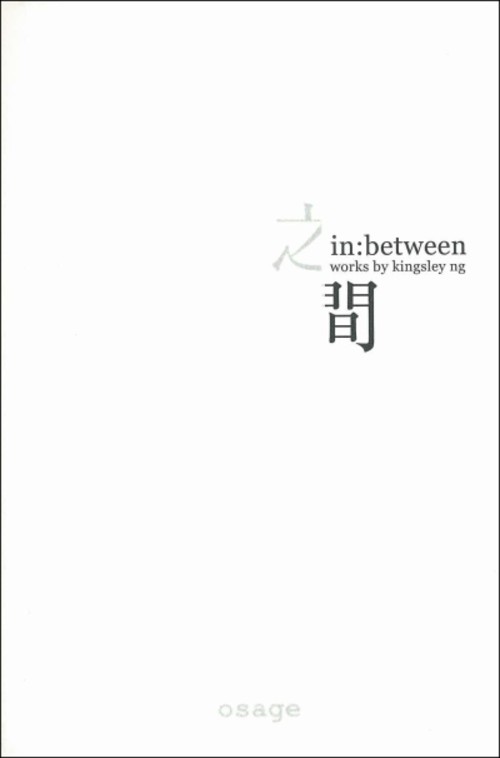 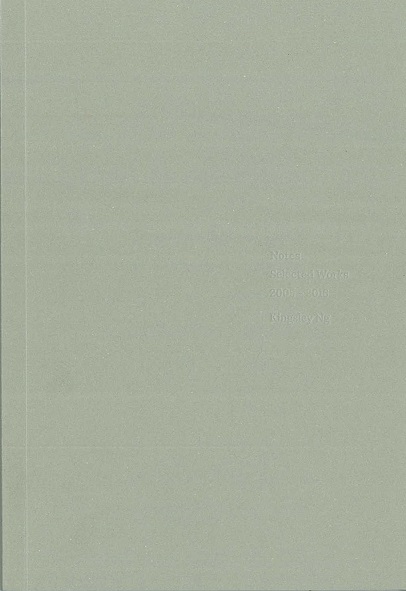 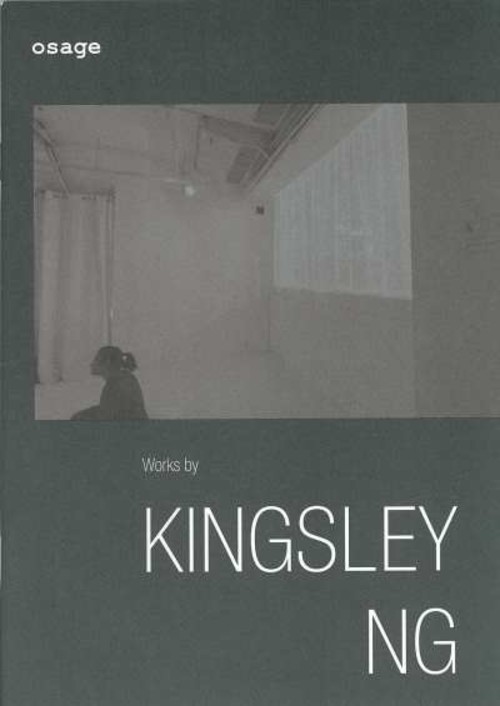