AAA's Enoch Cheng speaks to Araya Rasdjarmrearnsook about her latest series, her views on female artists, and the use of the corpse in her work.

AAA: Let us begin with your recent works, In This Circumstance, the Sole Object of Attention Should Be the Treachery of the Moon and The Two Planets series, in which you have farmers commenting on great paintings by Western masters. I know these works stemmed from your experience of students' hesitation to critique 'great works'. As a teacher and an artist who has been well received in the West, could you share your reflections on these works?

Araya Rasdjarmrearnsook (AR): The Two Planets series is a meeting place for Thai farmers and the masterpieces from the Western canon. On a certain level it is quite cruel to bring them together because the farmers would have to deal with enigma, unknowingness and their own insecurity. I was well aware that in this scenario the Western masterpieces would not have met with the customary appreciation they usually receive.

However, this series contains extraordinary aspects resulting from this encounter, namely the patience of the farmers who might seem to be an inferior audience for Western masterpieces in gilded frames. The new work is also rendered beautiful in its lively dialogue that reveals a traditional way of living, humour and perseverance.


AAA: In a number of your works you challenge your viewers by touching on social taboos regarding death. These works have raised numerous discussions, especially in relation to how you handled a real corpse as a subject. How do you feel about the criticism you received surrounding such work?

AR: Criticism does more to reflect the critic’s intelligence than to help visualize or understand my work.


AAA: How has your formal training impacted on your current mode of practice?

AR: While I was doing my degree I had to draw figures and landscapes, an exercise that created a moment of open perception in order to transmit the images accordingly. However, in the course of perceiving and transmitting, there was a certain lack of dimension – as soon as you were equipped with your utensils and placed in an open field, you began to draw.

I did the opposite in my performance with the corpses by engaging in visual and olfactory senses and then attempting to perceive the whole truth through the narrowest channel. In so doing, I achieved the greatest understanding of the corporeal object in front of me, as well as its abstract element.


AAA: Some may consider you to be a feminist artist because you address gender issues through your work, such as the series of videos where you had a female psychiatric patient or a woman talking about her father killing her mother and so on. How do you feel about this label?

AR: When considering the issue of culture and gender, there is always a translucent web, keeping women in the confinement of propriety, not unlike a hymen. The majority of female psychiatric patients get themselves so entangled in this web of appropriateness that they consequently become ill.

As a female artist, my interest in the fabric of seemliness that Thai society weaves for women has made my experience of creating both art and literary works very intriguing – it is self-gratifying. I don’t need further definition or labelling.


AAA: There are far less active female artists in Thailand than there are male.  What do you think are the major reasons for this? Since increasingly more female Thai artists are participating in international platforms, such as the Venice Biennale, do you see this phenomenon changing?

AR: Perhaps the reason why so few Thai women choose to become artists is simply that they fare better in other roles – ladies, prostitutes, mothers and wives.

If there are more woman artists nowadays it is first and foremost because of the transformation of Thai culture; women are now more confident and expressive while paying less attention to the repercussions.


AAA: Nostalgia, loss and death have been recurring themes in your work. When did you begin to think about these issues?

AR: My interest sprung from a real life experience of a three-year-old whose mother just disappeared one day. This very experience has fed on itself – when one is engrossed in the world it sometimes fades away, but it always reappears when we are down with our lives.


AAA: Before making video installations you worked with installations made of natural materials, such as hair and corn husks. Can you tell us how these mediums helped you achieve what you wanted to express?

AR: Strains of hair representing a person reveal themselves in the most remarkable fashion when laid in a water-filled wooden barrel alongside an x-ray film. I chose Corn husks primarily because villagers in the North use them to make flower bouquets for cremation ceremonies. They are exhibited splendidly, in expansive environments and large quantities.


AAA: At the beginning of your career, you started out with printmaking rather than three-dimensional mediums. Do you see that your early training and experiments with print have any relation to your work now? What interested you in printmaking during these early stages?

AR: It was a choice made at an academic institution. Printmaking practice improves one’s perseverance, patience and reaction to disappointment. Maybe being prepared for these things from the outset can help build an artist’s character.


AAA: As well as being an artist you are also known as a writer of non-fiction and short stories. What do you write about? How does your writing and art complement each other and do your stories also touch on the same themes as your art works?

AR: I once received a letter from someone in the literary circle – a magazine associate editor. She wrote that she had read my short story ‘Death of a Colleague and Cease to be an Artist’ and realized that my art and writing are so intertwined that if I stopped doing one of them, the other wouldn’t survive on its own.

I began writing poetry and short stories and then moved on to novellas and novels. I’ve also been writing an art column for more than ten years. I’ve written a lot about my dogs and I’m now writing about a female ghost who, after all these years, hasn’t been reincarnated and always ended up being an artist.

AAA: จากผลงานชุดล่าสุดของคุณ In This Circumstance, the Sole Object of Attention Should Be the Treachery of the Moon และ The Two Planets ซึ่งคุณให้ชาวนามาแสดงความคิดเห็นเกียวกับภาพเขียนที่มีชื่อเสียงในโลกประวัติศาสตร์ศิลปะตะวันตกนั้น เราทราบว่างานชุดนี้ได้รับแรงบันดาลใจมาจากประสบการณ์ที่นักศึกษาของคุณไม่กล้าวิพากษ์วิจารณ์งานคลาสสิคเหล่านั้น อยากให้คุณช่วยเล่าประสบการณ์และแนวคิดเกี่ยวกับงานชุดนี้ 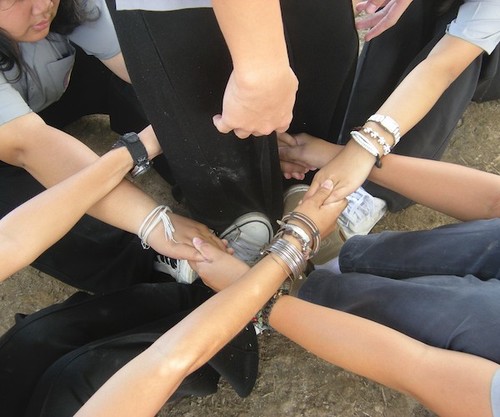