Oscar Ho reflects on the conceptualisation, audience reactions, and afterlives of his exhibition about Lo Ting and the ancestral myth of Hong Kongers.

Part Two of a series of notes by Oscar Ho, written for an AAA public programme on Facebook that coincided with the launch of his archive. The bilingual posts and Facebook interactions are available here on IDEAS Journal: Parts One, Three, and Four.

The Resurrection of Lo Ting

Following the discussion about the background and conceptualisation of the Lo Ting exhibition in Part 1, this week we will further examine its execution, audience reactions, and subsequent influence. The purpose of the exhibition was to introduce the ancestral myth of Hong Kongers. It was also meant to be critical of the authority and narration in historical writing, and by extension the relevant curatorial thinking surrounding the topic.

It took efforts to integrate elements like history, legends, imaginations, and mythological metaphors in an exhibition. To toy with the authority of conventional museums, the exhibition had to be produced conventionally. The curatorial statement, for instance, plagiarised from the jargonistic preface of Hong Kong Museum of History, with inserts of my curatorial ideas for the show.

The first part of the exhibition introduced Lo Ting through creative/historical expressions, such as texts and ancient records and poems. In order to present a compelling reality, we invited art practitioner Keung Chiming to create a life-sized Lo Ting sculpture. We intertwined historical events, such as the rarely mentioned Massacre of Lantau Island in 1197, with legends and creative expressions, in order to construct the history and cultural mythologies that we believe represent Hong Kong. Based on these mythologies, we invited artists to create “artefacts” as historical evidence. Under the title “We Came from the Sea,” this part illustrated the origin of our ancestors.

Another part of the exhibition was about the Tanka people—allegedly the descendants of Lo Ting. Since ancient times, the Tanka have lived between land and sea, suffering from the court and British oppressions. The long period of oppression, and subsequently the adaptability, remains pertinent to all those who consider themselves living in the state of “in-between.”

The exhibition also reflected upon the false authority of cultural institutions, which is engendered by the sense of elitism evidenced in a vast array of curatorial approaches. From the solemn exhibition spaces to the excessive use of jargon, art often leaves the public in confusion—as if the curators alone had already decided what is good and what is true. The Lo Ting exhibition conveniently adopts such an authoritative demeanour, telling Hong Kong ancestral history through a monumental Lo Ting sculpture, a large oil painting of the 1197 Massacre, and nicely cased antiquities relevant to Lo Ting. The exhibition was designed to make the counterfeits authentic. To make it even more convincing, Eric Wear, an American friend of mine, was invited to shoot a video where he explained the historical significance of the newly discovered Lo Ting antiquities in front of a bookshelf wearing a bow tie. Endorsement by foreign experts was a useful tactic to make the show credible.

I was observing the audience during the opening; their reactions varied. Some decided immediately that the show was fictitious—with all the effort and time put into composing the stories, I was certainly disheartened. Yet, I felt even more conflicted when audience members bought the curatorial narration unreservedly. I overheard a father explaining the lives of our “ancestors,” and felt immense guilt for deceiving the audience, especially the kids. I could not help but to reflect upon the purpose for the show. After much deliberation, I figured the goal was to confuse the audience as they finished the exhibition. The state of confusion initiates curiosity and critical thinking, as the viewers begin to ponder between truth and falsity. It is also very much the essence of Lo Ting as we speak about this in-between quality.

Unfortunately, most of the public and the media were rather indifferent towards the exhibition. Originally, we planned to host Lo Ting exhibitions for five consecutive years, as an attempt to further develop the myth, and to make it viable. The plan was to focus on a different topic each year, for instance the way mythologies were popularised, or how they had become commodified. The second show in the following year was still not well-received; then we further reduced the scale of the third show due to insufficient funding. In the end, we decided not to pursue the project anymore.

Strangely, after more than a decade, Lo Ting has now resurfaced. In 2014, Theatre Horizon staged Century-old Dreams of a Fishing Harbour – Episode I at Edinburgh International Festival, and later Hong Kong. It was a play featuring Lo Ting as the protagonist. Lo Ting remained the leading figure in the two plays that followed: Nightmare, performed in 2016, and The Awakening in 2018. The plays discussed the fate and political circumstances in Hong Kong, and drew much attention from the public. Lo Ting has also appeared on mass media. In 2011, an episode of TVB series, Hong Kong Enigmata, was titled “In Search of Lo Ting Footprints.”

Later in 2014, Hong Kong Vomic released The Legend of Hong Kong Mermaid: Lo Ting. In 2018, three local and mainland critics argued that the main character in Stephen Chow‘s film The Mermaid was modelled after Lo Ting. Fruit Chan’s Three Husbands (2018) also featured a female lead that was considered a descendant of Lo Ting. Over the years, artists such as Clara Cheung, Ellen Pau, and Lam Tung Pang, have also created works dedicated to Lo Ting.

I am certainly flattered by the resurrection of Lo Ting. Yet, why does it resurface right here right now?

(I also want to mention that the three Lo Ting exhibitions cannot be made possible without the generosity and support from friends in the culture, academic, and art communities. The exhibition series was by no means my personal achievement; I’d like to clarify that, and extend my gratitude to all who have supported the initiative.) 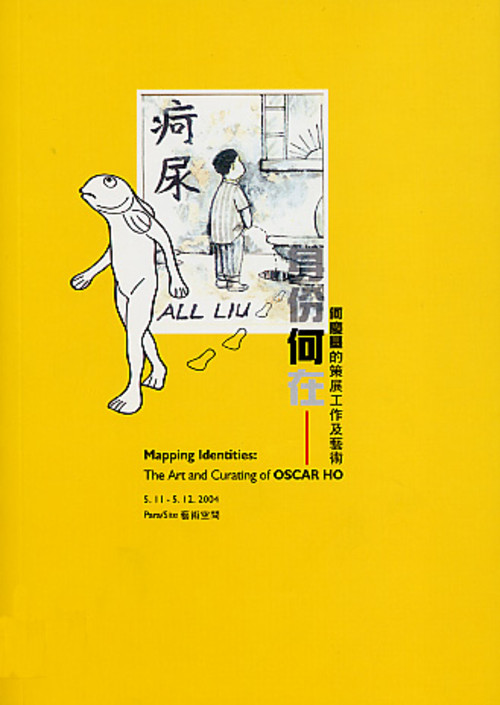