Nora Taylor reflects on the history of the Vietnamese independent art space, which was active from 1990 to 2005 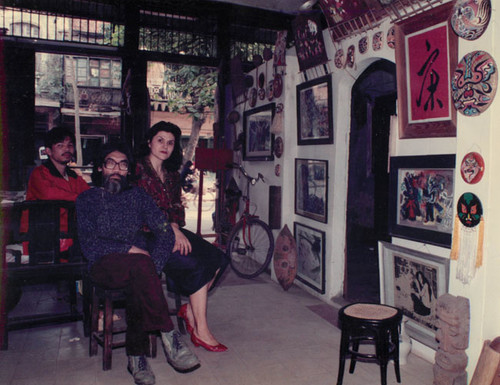 In 2010, AAA researchers began working with co-founder and curator of Salon Natasha, Natasha Kraevskaia, to compile and digitise the Salon Natasha Archive, which documents the exhibitions and art projects organised and curated by the gallery from 1990 to 2005. This project is one of two digitisation projects that AAA devoted to alternative art spaces in Vietnam, bringing to light highly important resources on contemporary Vietnamese art in the 1990s, a critical era in the contemporary history of Vietnam after the implementation of Doi Moi (Renovation) policies in 1986, and reflect how artists responded to and reformed the State monopoly on the arts.

Founded in 1990, Salon Natasha is the home, studio, artist meeting and exhibition space created by the late Hanoi artist Vu Dan Tan (1946–2009) and his Russian born wife Natalia (Natasha) Kraevskaia (b.1952). Located in just sixty square meters of space at 30 Hang Bong Street, in the heart of the Vietnamese capital, for its first decade, Salon Natasha operated as the only venue for artistic experimentation in a city largely controlled by State-run cultural organisations. Because it was situated in the artists’ home and studio, it was able to function freely outside of the governmental system. In fact, it was more than independent from the State, it did not rely on outside funding at all. To this day, it is the only art space in Vietnam that has been entirely self-reliant, without any subsidies. During its two decades of activities, it organised over one hundred artistic events ranging from creative collaborations, curated exhibitions, spontaneous performances and international exchanges. The archive consists of documents pertaining to each project that Salon Natasha organised and in which it participated both in Hanoi and internationally.

As the first digitised archive of materials from Vietnam, the Salon Natasha project marks the beginning of a much needed process of tracing the different pathways to contemporary art undertaken by Vietnamese artists since the onset of Doi Moi, or renovation in the late 1980s. As a physical space, Salon Natasha was a pioneer space where artists felt free to experiment with art making practices without the pressure of having to comply either with the market or a sanction from the State. Additionally, it never had the look of a gallery or a "white cube;" it always functioned like a studio where art works were produced and fabricated on site. As a concept, Salon Natasha functioned as a living organism activated by the artists who used the space to stage their projects and engage their public in a creative atmosphere.  As an art project, it was a collaboration between multiple artists, akin to the surrealists "exquisite corpse," where artists would initiate an exhibition project and invite other artists to respond. While Salon Natasha may have had its unique qualities and innovative spirit, it also was a reflection of the artistic environment in Hanoi both before and after Doi Moi. As an archive, Salon Natasha highlights two facets of the Hanoi art world: the spirit of creativity in the face of adversity and the tight knit community of artists that corroborate and collaborate with one another in support and solidarity for the common cause of contemporary art.

Conducting art historical research in Vietnam has long presented a serious challenge because of the dearth of art historical documents. Decades of war and economic hardships have damaged, if not destroyed, the creative output of many of the country’s leading artists. Artists rarely keep their own sketchbooks, notebooks, receipts and photographs let alone donate them to libraries or archives. The country’s harsh climate, both physical and political, has also contributed to the decay of records and the waning of artistic energy. In a country still largely controlled by the government, Salon Natasha is a rare exception, not only because of its status as an independent space operating outside of State control but also, as a repository of documents that are testament to the resilience and imagination of a generation of artists who worked to expand the artistic borders of experimental art and collaborate to infuse Vietnamese art with limitless creative possibilities.

As in other postcolonial nations such as India, Indonesia or neighboring countries such as Thailand, Cambodia and Burma, modern art in Vietnam developed out of an art academy modeled on European art institutions in the early part of the twentieth century. Contemporary art arose in more makeshift ways following several decades of formal realist art made under the politics of nationalism. The ruling communist party kept a close watch on artistic activities for the greater part of the twentieth century thus hindering free creative expression. Salon Natasha was a pioneer in its vision of creating a space where personal expression was not only encouraged but turned into an ever evolving series of exhibitions and curatorial projects that simply could never have been possible under the sponsorship of the State. It is telling that many of the country’s leading contemporary artists began their career at Salon Natasha. Artists such as Le Hong Thai (b.1966) Truong Tan (b.1963) came to Salon Natasha when they were totally unknown; Nguyen Minh Thanh (b.1971), Nguyen Van Cuong (b.1976) and Nguyen Quang Huy (b.1971) had their first exhibitions at Salon Natasha when they were in their fourth year of art school. Salon Natasha never looked for established artists. Many came because they were inspired by the atmosphere or had a connection with friends of Salon Natasha. One can think of Salon Natasha as a hub connected to a larger art network or an open door to other art communities.

The documents are presented chronologically by event. The event nature of the Salon activities is crucial because the space continually reinvented itself through its projects. Events include not just exhibitions in a conventional sense but also curatorial and creative projects in which artists were engaged. Documents include photographs of events, artists involved in each event, art works created for the events as well as texts, catalogue essays, correspondence between different parties and price lists. The documents reflect the spirit of Salon Natasha as a free, open, experimental, and democratic space.

I. 1980s Before the Opening of Salon Natasha: Vu Dan Tan’s studio

Before Salon Natasha became an art space, it was Vu Dan Tan’s studio. This section can be regarded as the precursor to Salon Natasha.

In the early 1980s, Vu Dan Tan established his own art studio in his house on 30 Hang Bong, in Hanoi, which, due to the intellectual crowd in which his father, the publisher, Vu Dinh Long (1896–1960) was involved previously, soon transformed itself into a meeting place for Hanoi intellectuals and bohemian circles. It was also one of the few places that the small expatriate community could meet these creative people in person. In the 1980s, it was still forbidden for Vietnamese citizens to communicate with foreigners except for the purpose of official collaboration, so Vu Dan Tan’s studio became a kind of underground meeting place for the international community interested in Vietnamese art and culture. There are photographs of Vietnamese renowned artists, writers, film directors and musicians, regular visitors to the studio and whose presence helped to maintain the informal, friendly and free spirit that later reigned in Salon Natasha. The section also contains the numerous images of sketches made by the artists who visited the studio including the iconic modernist painter Bui Xuan Phai (1920–1988), and Hoang Lap Ngon (1910–2006), one of the graduates of the colonial period art academy, L’Ecole des Beaux Arts d’Indochine (1925–1945). Early works, a total of about 160 items, by the artists, who later were represented by Salon Natasha are also included into this part of archive.

In 1990, Vu Dan Tan’s studio was officially transformed into a Salon, although renovation to accommodate began in 1989. For three years prior to that, from 1987 to 1990, Vu Dan Tan lived in the Soviet Union and was inspired by the dramatic shift in visual art in Russia immediately after Perestroika was announced by Mikhail Gorbachev: by its pulsating freedom, unpredictable experimentations, variety in expression, and spontaneous seizure of public spaces and total disengagement from the previously ruling ideology and state control. In his view, Doi Moi, the Vietnamese analog to Perestroika, had not made as much of an impact the Vietnamese art scene. Wishing to contribute to the development of artistic freedom in his native country, he decided then to create, from his own home, a kind of public space where the spirit of innovation in Art would rule. Thus, Salon Natasha (named after his Russian wife) opened as an art space independent from any official interference. It was called Salon from the French–Russian style to accentuate that it is a place not only for exhibiting art, and hosting other cultural happenings, but also simply for people to meeting, discuss and exchange ideas. Thus, besides Tan and Natasha, there were other people who helped to develop the space, such as Do Phan (b.1956) and Mai Chi Thanh (b.1965) who contributed to its physical look, and French artist Eric Leroux (b.1959)who brought in new ideas.

This section contains about 500 files of materials that cover the first three years of Salon Natasha's existence (1990–1993) or the foundation for its future activity. These include photographs of the space, documentation of Salon Natasha’s day-to day operations, workshops and images of the artworks shown there in the early 1990s.

Salon Natasha’s main activities took place between 1994 and 2005. If, in the first few years of its operation, it had been mostly a place for displaying contemporary art with the occasional exhibition, after 1994, it carried out up to seven exhibitions and art events a year both in its home location and elsewhere in the city and abroad. These included: charity art auctions, collaborative projects, multimedia performances, international exhibitions and art conferences. It also initiated and curated several projects that resulted in major exhibitions beyond its walls such as Crosscurrents (1997–1998), in collaboration with the Australian Embassy and ten venues in Australia, the exhibition Composition: Movement and Immobility at the French Cultural Center (1995), and Spirit of Hanoi (1998) or Salon Natasha as an installation in Finland within the framework of the Asian Art Festival.

Although Vu Dan Tan and Natasha Kraevskaia never considered themselves to be art collectors, over the years of its activity, Salon Natasha accumulated a substantial number of art works mostly through gifts, works made in the Salon or especially for the couple as well as a few purchased items. These works range from artists’ books, postcards designed or painted by artists, sketched portraits of artists drawn in Salon Natasha and other art objects and small scale sculptures made in situ. The collection also includes works by modern and contemporary Vietnamese artists such as Bui Xuan Phai (1920–1988) and a few naïve or outsider artists. It also includes a series of Taoist masks, paintings and hand-woven textiles by the Thai ethnic minority group living in Mai Chau. The collections reflect the friendships forged by Vu Dan Tan and Natasha Kraevskaia as well as their personal tastes and Natasha’s research interests. The folder contains more than 2,000 items.

Salon Natasha’s main goal was to develop a space for, and with, the community and to establish an informal friendly environment for art lovers. The space’s backbone was the collaborations with artists and the regular involvement of habitual visitors and friends of Salon Natasha. The archive wouldn’t be complete without a record of these people who were an integral part of Salon Natasha’s intense life.

This part of the archive combines press and media reviews of Salon Natasha including documentary films for German, Russian and Spanish television channels where Salon is featured along with other cultural sites. The scanned press clippings of this folder reflect Salon’s activity and achievements over different periods.

Note from the Editor: AAA thanks Natasha Kraevskaia, Mai Ngoc Ha, Dang Duong Bang, and Nora Taylor for their invaluable contribution to this project.