Lee Wen’s Independent Archive (IA) is many things, but its main purpose is to independently document visual art from both Singapore and elsewhere, particularly time-based and event-specific art. It was founded by the late performance artist Lee Wen in 2012, with the mission of preserving a record of independent and experimental art practices that might otherwise pass unnoticed (or be suppressed) by major institutions. This goal was, perhaps in part, informed by the 1994–2003 de facto ban on performance art in Singapore, in response to Josef Ng’s Brother Cane, which protested the police entrapment of gay men. Informing the practical concern of documentation was an unflagging dedication to what Lee described as “the sovereignty of art,” and how critical it was for the art community to have its own spaces and organisations, as a counterpoint to institutions private and public.

My part in this project begins in late 2015, as an artist/writer in need of work, having heard that Lee Wen was looking for someone for the archive. He explained that the job had already been taken, but since I asked, he’d just take me on as well. This is probably the last time in human history that someone has walked in, asked for a job with a firm handshake, and gotten one.

One of the first tasks he set us was dealing with a daunting backlog of catalogues and other books that had been submitted, donated, or otherwise found their way into loose drifts of printed matter, an endeavour referred to as The Indexing. Most of the titles that we sorted through were entirely predictable. Just to name a few: the catalogues of the 1st through 5th and 10th through 16th editions of the Nippon International Performance Art Festival; the 2005 and 2006 editions of Polish performance art festival Castle of Imagination; Space, the inaugural exhibition at Britto Space, Bangladesh; Censorship, a group exhibition at Singapore’s Plastique Kinetic Worms; and FX Harsono’s 2003 solo, Displaced. Apart from catalogues, you might also find Jacques Derrida’s Archive Fever, Cai Qing Sonnenberg’s Diary of Performance Art 2006–2013, Alfian Sa’at’s One Fierce Hour, Yao Jui-Chung’s Performance Art in Taiwan 1978–2004, Jimmie Durham’s A Certain Lack of Coherence: Writing on Art and Cultural Politics, The Fajar Generation edited by Poh Soo Kai et al., and so on.

From time to time, though, I’d come across titles like the February 2000 edition of Lonely Planet Italy. Or Robert Anton Wilson and Robert Shea’s Illuminatus! Trilogy. Or the I-Ching. Or A Floating Life: The Adventures of Li Po by Simon Elegant. Or Lenny Bruce’s autobiography, How to Talk Dirty and Influence People, and so on. Lacking any other context, their presence in an art archive’s library is outright perplexing, and I found myself wondering if they had simply popped into existence at random, drawn by the presence of so many other books.

The more parsimonious explanation, naturally, is that the core of the library’s collection is drawn from Lee Wen’s own book collection, bulked out over the years with donations from other artists and institutions. The copy of Lonely Planet is likely an incidental inclusion—perhaps he bought a copy before his participation in Performatica’08 in Italy. Finding the complete works of Franz Kafka and Arthur Rimbaud, Nick Cave’s And the Ass Saw the Angel, Capsule: A Dose of New Singapore Writing, and the selected poems of Bei Ling might suggest his tastes in prose and poetry; similarly, the I-Ching, along with texts like Elizabeth English’s Vajrayogini: Her Visualization, Rituals, and Forms, calls to mind his earnest thirst for spiritual and philosophical understanding. Spend enough time amongst the gathered books, and you might begin to sense faint through-lines of his thoughts and personality.

As for The Adventures of Li Po, my first thought was that Lee Wen enjoyed the works of the famed Tang dynasty poet, and perhaps identified with the figure of another itinerant artist. The connection, however, goes a little deeper—when I mentioned the book to him, he recounted how his father, a writer of some note in the Chinese language modernist literary community, took on a pen name in homage to Li Po. He didn’t outright say as much, but he seemed to connect with his father through the poet.

With the work of cataloguing these titles going steadily, we soon came to the point of running out of shelf space. One of the solutions I suggested was trimming the fat—ruthlessly cutting out every title that could easily be found in other libraries, especially the ones that weren’t art related. I pointed to a list: what could something titled How to Talk Dirty and Influence People have to do with performance art?

Lee Wen dismissed the notion out of hand. He pointed out that Lenny Bruce was a comedian and activist known for scathing humour and withering criticism of the status quo, for which he faced several obscenity charges—not entirely unlike the series of events that would see performance art officially shunned for ten years. Others had various explanations that added up to the idea that IA’s library shouldn’t be laser-focused, but expansive and holistic.

Ultimately, none of these books were removed—which would, in retrospect, have been a mistake: hollowing out the character of the archive for the sake of simple efficiency. That character, which could be mistaken as some quirk of randomness, is an echo of Lee Wen himself: flickering glimpses of his experiences and thoughts, his sense of the world, and what change he tried to effect in it.

That he was the prism through which the archive was filtered could, of course, be trying at times. A given day at IA could be predictable, productive, and handily managed—or it could be an ever-cascading series of improvisations, which could either spark a crisis, or result in a Zen-like state of flow. The latter could come in the form of little things, like a passer-by dropping in for a chat and somehow deciding to help fix the fan, or much larger improvisations, like the mezzanine storage area that sagged somewhat disconcertingly in the middle. On a good day, you’d see the amorphous network of friends of staff and volunteers chipping away at the endless backlog of material, working on one project or another, riffling through various mysterious boxes and closets, gradually transitioning into music or performance jamming late into the night. On the other hand, the very worst days could see me bringing Lee Wen to the hospital after a fall, or, memorably, the abrupt realisation that we’d run out of money, and the weeks of mad scrambling that followed. At the same time, aspects of institutional order co-existed alongside the fractal weirdness: our system of cataloguing books was adapted from the approach taken by Asia Art Archive, and we were in the process of becoming a more formally organised non-profit during our last days on Aliwal Street in 2019, located in the historically Malay and Muslim, rapidly gentrifying neighbourhood of Kampong Glam.

These moves towards the conventional did not, of course, constrain Lee Wen’s holistic sense of experimentation, which went beyond his approach to the Archive’s collections. In the organisation of IA, he advocated what he called a Steinerian approach to management, adapted from the pedagogical theories of Rudolf Steiner (which informed Waldorf education). Steinerian management, he would explain, had everyone at IA doing their own thing, pursuing projects that were in line with our own interpretations of IA’s mission, with loose oversight from Lee Wen.

He did ultimately tend to have the last say, but in my experience, it was much freer than the traditional approach of being bossed around by a superior. I pushed for a programme focused on artists’ talks and presentations, while others centred IA’s programme on areas like experimental music and performance, Maker and DIY-oriented workshops and talks, screenings and reading groups, and beyond—depending on who was working with Lee Wen when you attended a programme at IA, the experience could be wildly different.

There is an aspect of IA that will not readily come across through visiting its library’s new home in a flatted factory shared with creative collective Ichinen Sekai, or browsing through its digitised collections. Throughout the span of its existence on Aliwal Street, IA served as a site of continuous encounter—from day to day, friends of Lee Wen and IA would filter in and out, chatting, jamming, collaborating and performing. This rotating cast of passers-through included artists, musicians and curators, random travellers who happen by, the occasional stray cat, and the extended network of friends-of-friends that propagated therefrom.

This side of IA also extended to coming to work with IA—one day you might drop in to do some reading, speak with Lee Wen, or hang out with friends already working with IA. Over the course of an afternoon, Lee Wen might ask for a little help here and there—repositioning him in his chair, fetching his stick, and other small favours. Eventually, you find yourself spending more time at IA, and all of a sudden you’re showing up regularly and drawing pay.

Accessing the archive and working with the archive blend together in a kind of perpetual stew of sociality—a performative state of indefinite duration, even. Now, several months after Lee Wen’s untimely passing, a new team is trying to take up his mantle. Alongside the prosaic challenges which now face IA—securing funding, establishing an organisational base, among others—there is also the question of not just maintaining the unique spirit of IA, but also of growing and evolving, in keeping with that character.

Bruce Quek‘s artworks are driven by a fascination with the complexity of urban life in an information-drenched age. He observes technology and society with a sense of cynical humour, taking our everyday experiences and rendering them absurd. His practice ranges across installation, performance, and experiments in generative animation and image recognition. He focuses on producing disquieting experiences, with recent projects examining everything from light pollution in relation to pattern recognition, and the limits of empathy imposed by informational overload. 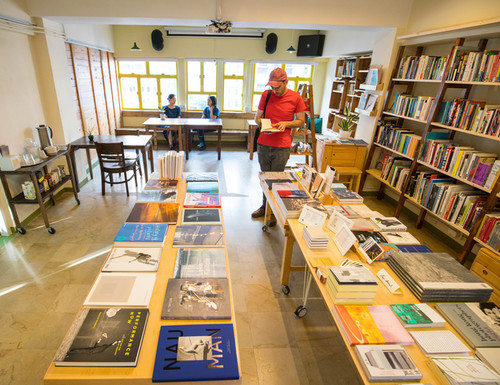 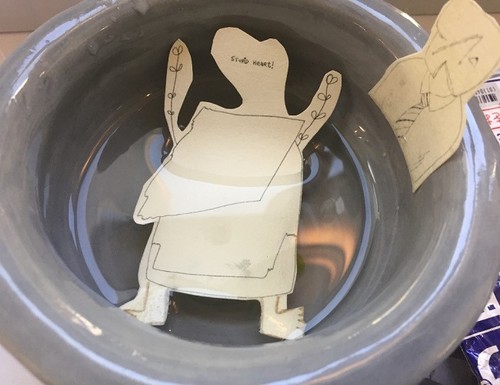 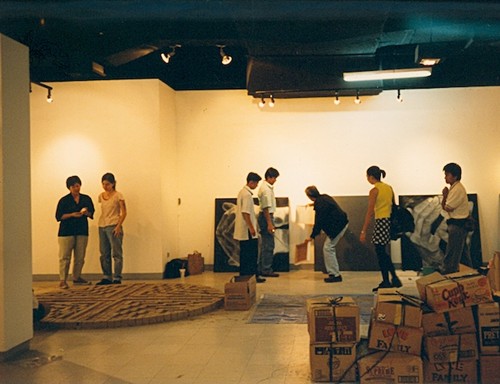 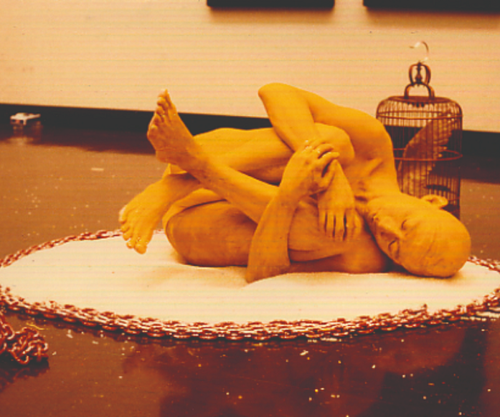