My conversation about working with the Hans Van Dijk archive began in February 2011, when Beijing-based curator/gallerist Zhang Li informed me that 2012 would mark one decade since his passing. Van Dijk was commonly referred to in Chinese as the ‘older Hans’ (to distinguish him from Hans Ulrich Obrist). But I did not experience the scale of this archive until April 2011, when I met with the late Frank Uytterhaegen who was safekeeping this trove of materials on contemporary Chinese art dating from the late 1980s to early 2000.

Van Dijk was from the Netherlands where he studied art and craft, specialising in colour systems, at the Academy of Arnhem in the mid-1960s and industrial design in Eindhoven. In the 1970s, Van Dijk began working as a designer and in 1975 he set up a small design firm, making furniture and silkscreen prints for advertisements and other types of publicity. In the 1980s, he became interested in Ming dynasty furniture and began to apply these techniques to his furniture design and production.

For this, Van Dijk came to China in 1986 to study Chinese at Nanjing University, where in 1988 he began to conduct research on modern Chinese art. He soon became familiar with art developments of the time in Hangzhou, Shanghai, and Beijing, which coincided with the height of the 1985 New Art Movement, and he began to establish conversations with artists about their practices.

With this research, he published an article in two parts in China Information, a magazine published by the University of Leiden, under the title "Painting in China After the Cultural Revolution: Style Developments and Theoretical Debates".  After the 1989 Tian’anmen incident, Van Dijk returned to the Netherlands for two years, during which he improved his knowledge of Chinese history, art history, and culture.

From 1991 to 1993, Van Dijk made a few research trips to China in preparation for the infamous ‘China Avant-Garde’ exhibition at Haus der Kulturen der Welt in Berlin, which opened in January 1993. This exhibition included artists such as Ding Yi, Geng Jianyi, Fang Lijun, Zhang Peili, Wang Guangyi, Huang Yongping, and many others. 1993 was a critical year for Chinese contemporary art as it stepped onto the international stage, along with two other major exhibitions, namely, the ‘China's New Art, Post-1989’ presented in Hong Kong, Australia, Canada, and the US, and at the 45th Venice Biennale. China Art Archive and Warehouse (CAAW) was officially founded in 1998. Prior to this incarnation, Van Dijk operated under the name New Amsterdam Art Consultancy (NAAC) since 1993 after his relocation back to Beijing. NAAC was active between 1994 and 1998, during which time Van Dijk introduced many Chinese artists to Western curators, journalists, collectors, and sinologists. He also organised exhibitions for Chinese artists in temporary spaces across Beijing. Only in 1996 did he begin to host exhibitions at the Central Academy of Fine Art’s first official exhibition space.

Van Dijk bridged Chinese artists’ practices to western counterparts. One of the most well-known exhibitions he organised was ‘Mondrian in China’. The exhibition showed archival materials of Piet Mondrian, juxtaposed with the works of Chinese artists of Ding Yi, Liu Ye, Luo Qi, Mai Zhixiong, and Yi Ling, as a response to Mondrian’s materials, showcasing different interpretations of minimalistic abstraction.

From early on, Van Dijk traveled through China to meet with artists. Without the convenience of email, artists sent him photographs and slides of their work and discussed their ideas in letters.

What we see now at CAAW is what Van Dijk left behind. During the last year spent digitising the material in the CAAW, we discovered that Van Dijk’s trove consists of approximately 480 artists files, over 50 titles of periodicals and magazines in Chinese, English, German, and Dutch, including Meishu, Jiangsu Huankan, Art in America, and ArtAsiaPacific, and correspondence he kept about exhibitions he organised in China, Germany, and the Netherlands. The archive also contains texts and primary manuscripts by over 70 Chinese and Western writers, critics, and scholars on the subject of modern/contemporary Chinese art, as well as over 1,300 volumes of artists monographs and exhibition catalogues of Chinese and Western artists.

Interestingly, Van Dijk did not leave many of his own writings behind. Besides the few essays he wrote about Chinese artists and their work, one essay he published in 1993 in a compilation of texts under Art in Cultural Transmissionz explained his position as a foreigner working in a culture other than his own. In the essay he explained his viewpoint on curating the ‘China Avant-Garde’ show. I believe those were the guidelines he followed in collecting materials on contemporary art in the years after the exhibition.

1. What we show isn’t Western art but modern art from China.
2. The so-called Chinese art, that is the traditional art of China, is dead in that it is no longer capable of evolution and is kept alive artificially by the official machinery.
3. The demand for authentic ethnic ‘non-Western’ art expressed by romantically inspired Western art-lovers, is meant to keep the members of non-European civilisation on the level of noble savages and to deny them their individual emancipation and modernisation. 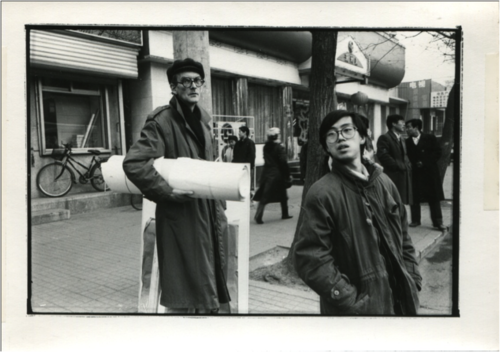 When Van Dijk was studying at Nanjing (one of the reasons he came to China was to learn more about classical Chinese furniture design), he was indulged with the young avant-garde movement in China. He started to correspond with artists, especially those from Nanjing, Hangzhou, and Shanghai. A letter from Hans Van Dijk to Zhang Peili, 1988

‘Dear Mr Zhang Peili, Now I have finished translating Art Project No. II. I am beginning to translate “On the making and exhibiting of ‘X?’ Series”. Regarding that article I have the following questions (see page 2). I wish to come to Hangzhou at the end of this month. I hope that we will have a chance to meet. Wish you’re well.’

In the archive, there is also a typescript of a Dutch article by Van Dijk from the late 1980s, about Zhang Peili and his fellow artists in the Pond Society, included with several texts by these artists translated from Chinese to Dutch. 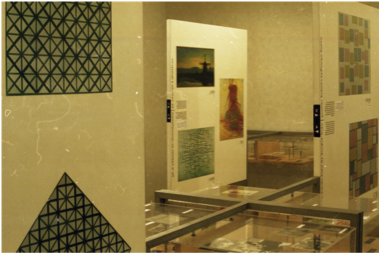 According to the archive, Hans Van Dijk got in touch with Shanghai artist Ding Yi in the 1980s. Ding Yi was one of the artists with whom Van Dijk worked most closely. Van Dijk organised two solo exhibitions for Ding Yi, one in 1994 in Shanghai and one in 1998 in Beijing. One may associate Ding Yi’s highly graphic and calculated paintings with the constructivist influences popular in the Netherlands when Van Dijk was studying at the Arnhem Arts Academy and at the Eindhoven Design Academy in the 1960s. The archive contains comprehensive images of Ding Yi’s works and research materials about the artist.

Besides organising exhibitions for Chinese artists, Van Dijk and NAAC also promoted art exchange between China and Europe through events and exhibitions. Examples include a show of the Chinese conceptual art group New Measurement and German artist Gunther Uecker (“Letter to Beijing” at the Neuer Berliner Kunstverein [n.b.k.], Berlin, 1995), a dual exhibition in Beijing of the work of Chinese photographer Luo Yongjin and German photographer Thomas Struth, and significantly, an exhibition of documents about Dutch artist Piet Mondrian and contemporary Chinese works that resonated with the work of Mondrian and his form of linear abstraction. The exhibition was jointly organised by the Netherlands Embassy and NAAC. It highlighted the work of Ding Yi, Liu Ye, Luo Qi, Mai Zhixiong, and Yi Ling. 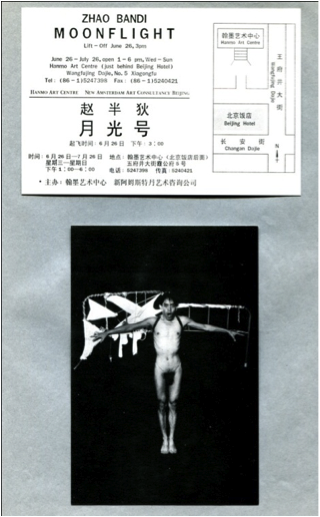 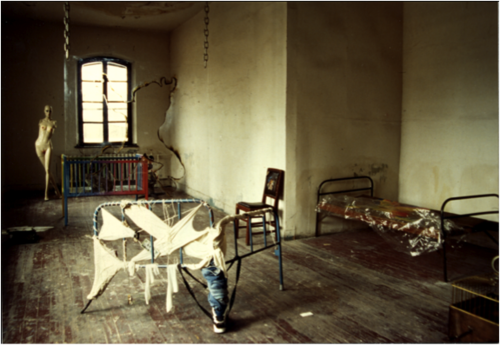 ‘Zhao Bandi, Moonflight’ was the first exhibition that NAAC organised. The artist Zhao Bandi was one of the most recognised young realist painters and this exhibition marked the moment in which he gave up painting. Van Dijk, who did not often write for the exhibitions he organised, wrote a short essay for this show, explaining the unexpected drastic change of style by Bandi:

‘“My god, why is one of the most talented oil painters leaving his skill is doing something absurd with ordinary furniture, a rib-bone of a pig, and a typewriter!? It’s a waste of his capacities and a tragedy for Chinese Modern Art,” his former teachers at the Central Academy of Fine Art complained. “Why does one of our most promising artists leave his medium? He could easily have made a fortune with it; doesn’t he understand or did he go insane?” his former collectors groaned.

The answer is simple: Zhao Bandi is an artist, not an artisan or businessman, neither obsessed with techniques nor with money, and strictly speaking also not concerned with art, but instead, with life.[...].’ 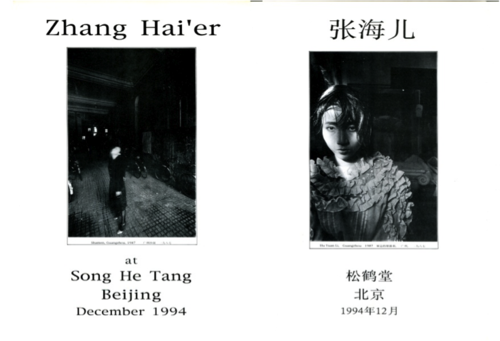 In the 1990s, China had no museum, art centre, or gallery dedicated to contemporary art, i.e. there was no infrastructure supporting contemporary art development. NAAC, as an independent art organisation, did not have a regular space for exhibitions. Van Dijk, like other artists and curators who organised exhibitions, rented different spaces in Beijing to hold short-term exhibitions. This solo exhibition of Zhang Haier, a photography artist from Guangzhou, was held in Song He Tang in Ritan Park, a place that often showed antiques and classical art objects. The exhibition exposed an interesting juxtaposition between Zhang Hai’er’s melancholic black and white photography capturing contemporary urban life in China and vases and furniture of elegant Ming-Qing styles. 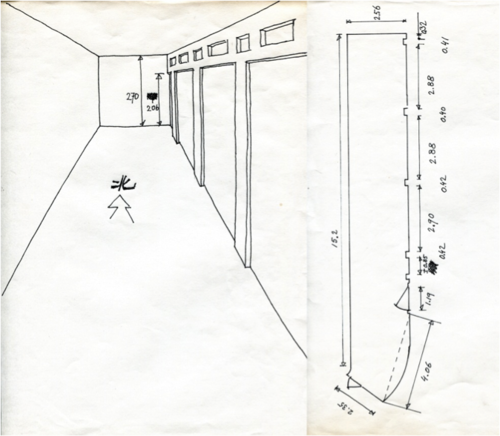 When the Central Academy of Fine Art was still in Wangfujing, it had a small gallery space available for rent. It was 15.2 x 2.56 metres with a 2.7 metre high corridor, but its downtown location was ideal. NAAC organised a series of exhibitions in the space in 1996, including solo exhibitions of the work of Wang Xingwei, Zhou Teihai, Luo Yongjin, and Li Yongbin, an installation show by Zhang Lei and Hai Ying, and a group show of artists from Guangzhou, Beijing, and Shanghai. 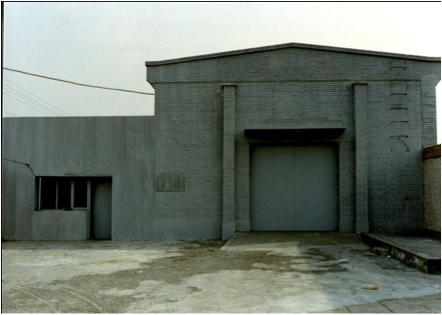 In the late 1990s, in the suburbs of Beijing, it became possible to rent (though not entirely legally, but for a rather affordable price) land from peasants on which to build houses or studios for personal use. Hans Van Dijk, together with collector Frank Uytterhaegen and artist Ai Weiwei, found a place in Southern Beijing and built a space for activities and exhibitions. That was the beginning of the China Art Archives and Warehouse (CAAW). This space was a mixture of independent alternative art space and gallery, which organised and curated experimental shows and at the same time helped artists sell their work. It was a special model established because of the lack of both alternative art spaces and commercial galleries in China.

CAAW stayed in this site in South Beijing until 2001, before it moved to its current location in Cao Chang Di in Northeastern Beijing. It was mainly Hans Van Dijk who took care of the exhibition programme in CAAW. After years of organising exhibitions in different venues, the new space allowed him to present exhibitions of larger scale more regularly. Unfortunately, in 2002, not long after CAAW’s relocation, Van Dijk passed away. Van Dijk was known for discovering talents not only from China’s big cities, but also from its peripheral areas. Wang Xingwei who lived in the Northeast is one example. Zheng Guogu, who lived (and still lives) in Yangjiang, a small town in the Southwest of Canton, is another. At first, these artists were often considered to be making work that was far afield from the mainstream and incomprehensible, but, as publisher and founder of chinese-art.com Robert Bernell has said, ‘they managed to withstand the test of time and today represent some of the most influential and significant artists in China.’ Shedding light on these lesser-known artists was one of the many great contributions of Hans Vans Dijk in the development of Contemporary Chinese Art. 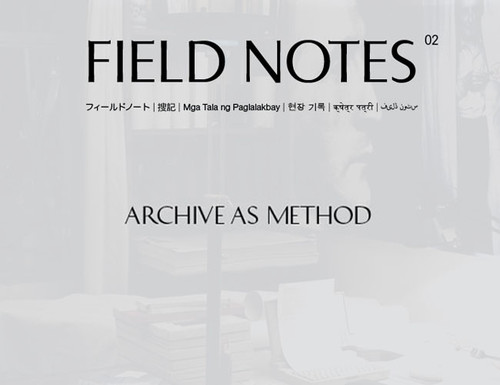 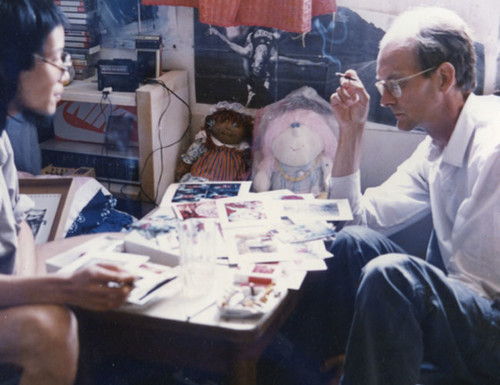 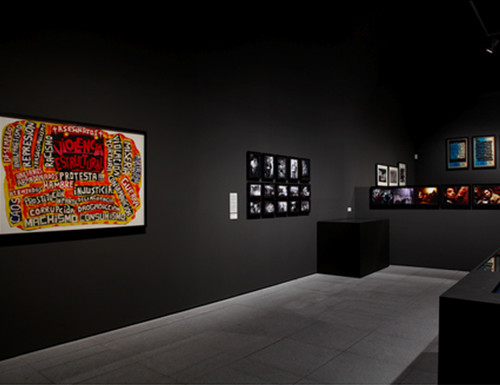 Micropolitics of the Archive | Part I: Southern Conceptualisms Network and the Political Possibilities of Microhistories

An intervention into different possibilities for history, the archive, and the transmission of knowledge 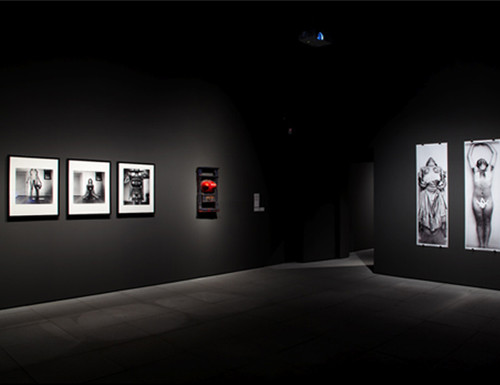 An intervention into different possibilities for history, the archive, and the transmission of knowledge