I slipped into Taiwan the day before the Taiwan government slapped on the quarantine order for Hong Kong visitors, and stayed a week till May 1st.

As the curator of Feng Mengbo's retrospective I commuted in and out of MOCA Taipei all week for various installation and publicity work. Gary Hill's show on the floor above Feng was also completed during this time.

(Both Feng Mengbo and Gary Hill exhibitions run from May through end of July 2003.) During the week I attended 2 new shows, one at the artist-run space IT Park and one at Taipei Museum of Fine Art, and visited a number of artists.

MOCA Taipei is just over a year old and Director Leon Paroissien has moved in full-time since November 2002. Leon has now trained up a very enthusiastic and efficient staff of 16, and the two large Feng Mengbo and Gary Hill exhibitions will now formally launch the MOCA's image as a space with special new media emphasis. The MOCA was set up under the dynamic drive of the previous Cultural chief of Taipei, Ms Lung Ying-tai, as an experiment in joint government and private sector endeavour. Start-up partners include Mdm Huang Hsiao-lan (of United Daily and Ming Sheng Daily), Barry Lam (of Quanta Computer) and Acer Computer, which accounts for the interest in technologically related art. Hiring a foreign director is an inspired and courageous move to connect Asia with other parts of the world, and the directorship of Leon Paroissien has given Taiwan direct access to international expertise. Long experienced in working with indigenous art and regional cultures, Leon Paroissien is sympathetic and generous to the Taiwan artworld, and brings a breath of fresh air to Taiwan's already very robust creative circle.

Both Feng Mengbo's and Gary Hill's exhibitions were well managed, even though both artists cancelled their visits at the last minute on account of SARS. In-house Curator Shen Yining is in charge of Feng's show "Past Virtualised - Future Cloned"; this is the artist's first retrospective in Asia with 8 computer and video works covering 1994 to 2003. The latest work is internet war-game "Ah Q” (Mirror of Death)(2003), a new version of “Q4 U” shown at the last Documenta, now presented together with a 8-minute video made this year. "Ah Q" uses a dancing pad instead of hand-held control, and it proves popular with the local youths. I conducted a virtual Forum with Feng Mengbo, who spoke to the audience with me and Japanese curator Shimizu on long-distance phone-call. Although attendance was low on account of the SARS fright (these weekly events at the MOCA are usually full-house), we had rather intense discussions.

Gary Hill's show includes the intriguing "Tall Ships" (1992) presented as the centre show-piece. It was installed with the help of the artist's personal technician and shows the full effect of people coming towards the audience as he walks down the dark lane. There are a number of single-monitor works covering Gary Hill's career. This show developed out of the programme created by Elaine Ng for the 2001 Microwave Festival of Videotage in Hong Kong, when Gary Hill came to Hong Kong for his retrospective show. Gary Hill may still visit Taipei in August to do a live performance; MOCA's curatorial team has already got the pair of special salamander requested by the artist, and the beasts are kept well fed in the meantime.

The opening at IT Park was well attended, mostly by artists. The show "Room Air" is lively, and good fun for visitors. The project involves 11artists and designers from Japan, each contributing to an imaginative aspect of modern travel, pretending to serve a fictitious airline “Room Air”. Both curators participated with artworks; Fumiya Sawa's work is a series of video documentary shot during his travels, and Yoshinori Hosoki's contribution is an airport announcement flipboard of destinations. Each destination is identified by one special historical or cultural feature of the place. I was surprised to be greeted at the exhibition by Mio Iwakiri, the Taiwan researcher of the Asia Art Archive, dressed up as an air-hostess.

Taipei Fine Arts Museum opened a show of its new acquisitions from 2002 and it includes a broad range of works, covering traditional and new media work. I was pleased to catch the big "Archigram 1961-1974" exhibition, a review of this astonishingly visionary generation of young architects. This architectural show reflects Taiwan's awareness of the significant role urban environment plays on culture, which is more than one can say for either Hong Kong or mainland China. (On this note one should also mention the wide variety of new publications in Taiwan addressing indigenous architecture.) In Hong Kong, our government is still happily serving its clientele of property developers who show little concern for either cultural identity or the environment, and yet wondering why culture and tourism is failing. Looking across the border from Hong Kong, the situation for heritage in China is simply too depressing for words.

New works by Taiwan artists in the past two years have been excellent, often better than what I've seen in mainland China lately. Of the new works I saw this time, particularly noteworthy are those by Wu Tien-chang and Hung Tung-lu. Yuan Goang-ming and Chen Chieh-jen's works at the last Taipei Biennial (November 2002) are still memorable. Yao Jui-chung has not only been making artwork but also busy curating and publishing. Yao published a book on the history on Taiwan's installation art in 2002, and a new book on Taiwan photography is forthcoming in June. The latter book is on new photography from the last few years and covers about 2 dozen Taiwanese artists. The art market has apparently all but collapsed in Taiwan, which seems to have done a great deal of good for creativity. For too long there was too much money in Taiwan chasing too few good artists; now everyone is back at the studio, taking time over their work. 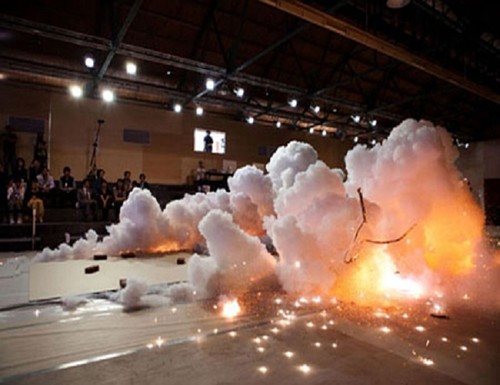 Re-Orienting Taiwan: The China Factor in Contemporary Art from Taiwan