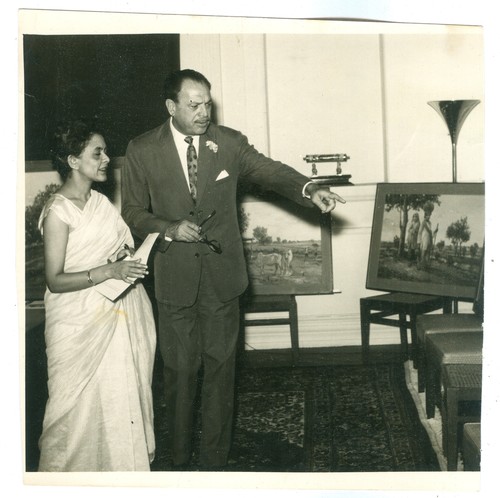 In this cut monochrome photograph, President Mohammed Ayub Khan points to a painting by Ustaad Allah Bakhsh with a look of concentration. Next to him, a woman in a bright white sari holds a sheet of paper and a pen, ready to speak. This woman is Zubeida Agha.

Agha was Pakistan’s pioneering abstract painter (1922–97), whose work focused on organic forms and philosophical ideas, rather than the conventions of European realism or the traditions of the Bengal school. She was also involved in many foundational art projects during Pakistan’s formative years. Unfortunately, much of her personal collection was buried in her Islamabad home and hidden away from the public eye, hindering research on Agha and her work.

It was not until 2015, when the Lahore Biennale Foundation Research Fellowship was awarded to Agha’s distant relative and researcher, Saira Ansari, that development began on AAA’s Zubeida Agha Archive. The records included in the archive are crucial to understanding Pakistan’s early and developing art scene, its first abstract artist, and Agha’s little explored role as an art patron—a shocking omission, since she was a founding member of Pakistan’s earliest fine art societies and the National Art Gallery in Islamabad; and was also the appointed Executive Director of Pakistan’s first art gallery, The Art Galleries, Society of Contemporary Art,1 which opened in Rawalpindi in 1961.

This photograph, when viewed with others in the archive, reflects Agha’s unconventional curatorial style, and hints at The Art Galleries’ modern and unique characteristics. Taken on 2 May 1963, the photo places the President and Agha side by side—a visual representation of Agha’s unusual influence during a time when the developing art scene was typically controlled by the state, with little concern for curatorial processes or opportunities for artists to exhibit.

Indeed, the existence of this open-for-all, artist-run gallery—along with Agha’s executive control over it—was unprecedented. For although she described the gallery as “semi-government, semi-autonomous,”2 governmental support was in fact minimal; and Agha controlled the bulk of the operations, logistics, and sourcing (for both its funding and artworks) on her own terms. She would even hand-write letters asking for paintings to show and sell at the gallery’s space on 25 Civil Lanes, rented from the Society of Contemporary Art.

Though The Art Galleries was essentially a “white cube” space, Agha was eager to explore other creative modes of display. She once showed twenty of Ustaad Allah Bakhsh’s paintings in the President’s home, propped up on the backs of chairs3; and in later years, she hosted exhibitions in her own home in Islamabad.4 By displaying curated art in lived-in environments, Agha’s make-shift and informal exhibition displays offered readings other than the abstracted, disembodied ones that a white cube might encourage.

Exhibitions were held at The Art Galleries every three weeks, with work from all tiers of the art scene—from well-known masters such as Allah Bakhsh and A. R. Chughtai, to modernist painters like Ahmed Parvez and Shakir Ali, to the then-more-obscure Mohammed Kibra and Jehangir. Agha’s curatorial philosophy was less concerned with the fame of the represented artists and more with the variety and execution of the paintings (including how the works would be viewed). Indeed, she complained that, prior to the establishment of The Art Galleries, exhibitions generally lacked any curatorial logic in terms of the selection and presentation of artworks.5

Over time, however, the gallery began losing support, Agha’s influence grew more constrained, and she felt the need to spend more time painting. Agha handed in her resignation letter in 1976, but the Board didn’t accept her resignation until a year later. It was in 1977, then, after a run of sixteen years, that this one-woman-operation of a gallery closed down upon Agha’s resignation.

Pakistan’s first art gallery embodied a fundamental shift for the country’s developing art scene, not unlike the way Agha’s paintings signaled Pakistan’s breakaway from older traditions—and this single photograph is but one of several other documents, clippings, ephemera, and catalogues in the Zubeida Agha Archive about the operations of The Art Galleries.

3. Agha personally curated the paintings for Ayub Khan, from an already curated exhibition of Allah Bakhsh’s eighty-paintings exhibition at The Art Galleries.

4. Similarly, Salima Hashmi also set up her gallery Rohtas-2 at her home in Model Town, Lahore, in 2001. 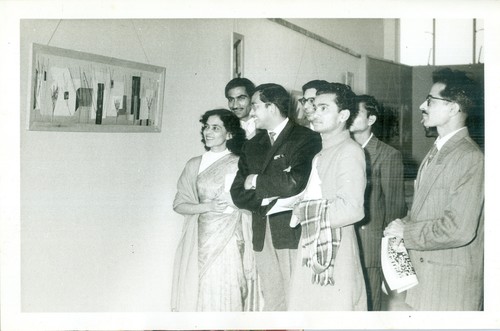