Fairly soon I will be running the newly established Museum of Contemporary Art Shanghai (MOCA Shanghai) at the People's Park. Located right in the middle of the People's Park and surrounded by the Municipal Government Headquarters, Shanghai Opera House and the Shanghai Museum of Art, the Museum definitely has one of the best locations in Shanghai.

For those who are familiar with my work, they might find my move to Shanghai a surprise. For a curator, the opportunity to run a new museum devoted to contemporary art in China, especially in a city like Shanghai, is just too irresistible. MOCA Shanghai is an independently operated, non-profit making museum. Funded by the Samuel Kung Foundation, it intends to be a platform for international contemporary art and design, as well as for art by new, up and coming Chinese contemporary artists. The Museum will open in late September this year, when it will launch a series of inauguration programs that include exhibitions of photography, painting, video installation, sculptures and design objects by Chinese, as well as, international artists and designers. Our collection will focus on new, emerging Chinese artists.

With staff from Hong Kong and Shanghai, our goal is for the museum to be professionally operated, both in terms of its physical environment, management and programming. We would like to bring in a more approachable image of the museum in China through a series of outreach and education programs.

I can easily imagine the difficulties an airborne curator would face in Shanghai, not to mention the complex cultural negotiation I need to be engaged in. I know what my limitations are and that there will be contributions I can make as an outsider. For me, art is ultimately about opening new ground and testing the unknown. I always get excited by opportunities to explore new landscape. Like Hong Kong of the 1990s, Shanghai is in a fascinating period of rapid development. I don't know whether the West is being over enthusiastic or not, but everybody is looking at China as the land of possibilities. And when they think of China, they think of Shanghai. This may be true, or it may just be optimistic misunderstandings. But when all these misunderstandings come together, it somehow becomes a reality.

As a result of rapid economic growth, one sees a dramatic growth in cultural investment in China. In Hong Kong, making enough money already qualifies you as a 'successful' person, but in China, you must have both money and culture. Economic growth must be substantiated by culture. I have been told that before 2012, Shanghai alone, will build 100 museums! This is worrying. While Chinese culture may be rich and diverse enough to put together collections to fill these 100 museums, the biggest problem that still remains is the lack of management and curatorial professionals to run these institutions.

By comparison, Hong Kong seems lost in limbo. In the last few years, both the best and worse lack conviction, and only the government is filled with intense passion. Unfortunately that passion seems invested in the wrong projects, like the West Kowloon Cultural District. The lack of vision, critical review and professionalism in the government's plan for such a major cultural development project is depressing.

The disturbing fact is that the infrastructure for art remains a closed system. Last year I started a course on curatorship and visual arts management. Members of this class are mature students with outstanding professional backgrounds. Their contributions in class have been most impressive. Many of them would like to further their career development in this area, but there is no job opportunity or further training ground for them, unless they are willing to go somewhere else, or join the government run museums and succumb to a bureaucratic culture that is contradictory to creativity and individual expression.
I feel a certain guilt at having aroused their passion, knowing that there is little hope left. What Hong Kong needs is substantial reform to transform the existing system, not a'world-class' carpet to hide all the dust and dirt underneath. When are we going to see some real changes? I have been waiting, for so long that I no longer remember when I start calling for change.

I love Hong Kong dearly. But I have to admit, after nearly two decades of fighting, I am tired. 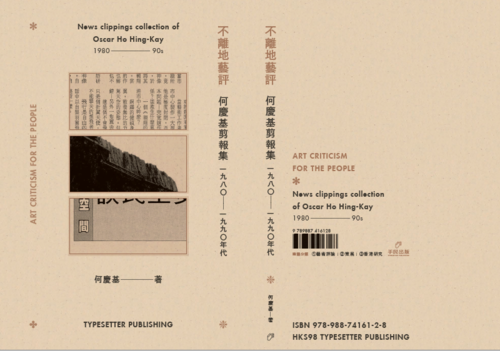