Reflecting on International Biennials and Triennials in Asia

I am writing against the backdrop of the sensational success that Asian art has achieved in the past decade, including record-breaking sales in the international art market, rising recognition among mainstream media and museums in the West, and unprecedented opportunities opening up to professionals in the field. What is equally remarkable, however, is the enthusiasm and effort that has been taken up by various artist groups, organizations, and governments from nations and regions across Asia to create their own platforms for displaying contemporary art and advocating international communication and exchange. These efforts have resulted in the proliferation of large-scale international art exhibitions in Asia, especially in East Asia. Most of these exhibitions take the model of biennial or triennial — a popular way of displaying contemporary art in the international art world. An impressive number of new biennials and triennials have emerged since the second half of the 1990s. According to the sequence of their establishment, we have: Kwangju Biennale (1995), Shanghai Biennale (1996), Taipei Biennial (1998), The Fukuoka Triennale (1999), Yokohama Triennale (2001), Chengdu Biennale (2001), Busan Biennial (2002), Nanjing Triennial (2002), Guangzhou Triennial (2003), Beijing Biennale (2003), and Singapore Biennale (2006). These biennials/triennials have brought huge attention to contemporary Asian art inside and outside Asia and have pushed Asian art to the forefront of new academic research.

The reason for the sudden popularity of the biennial/triennial in Asia is two fold: first, the biennial/triennial has become an internationally acclaimed model for art exhibitions; second, Asia has demonstrated its interest and capacity in playing a primary role in the production and dissemination of art in contemporary times. While the emergence of international biennials and triennials is not an Asia-centric phenomenon, it is evident that several countries from Asia have taken an active lead in recent years in founding new biennials/triennials, and the number of them is a crucial component in the worldwide boom of biennials.

What is so special about this exhibition model? It does not seem so different from other exhibitions held in museums and galleries, except that it does speak to a planned continuity and is usually large-scale; neither is it uniquely a contemporary product, since the earliest international biennial, the Venice Biennale, originated in 1895. However, the momentum generated by this exhibition model in the context of globalization is unprecedented and far reaching. The emergence of many biennials/triennials across the world has constituted an important part of the development of contemporary art, which in turn has accelerated the cultural impact of globalization and brought noteworthy changes to the practice of art and its dissemination.

The art world has experienced dynamic transformations since the 1980s, and particularly since the 1990s, as a result of globalization, a process that has widespread influences in economic, technological, socio-cultural and political domains [1].  In her book-length study of the relation between globalization and contemporary art, art historian Charlotte Bydler points out that with the growing popularity of electronic communications and transnational travel and migration, globalization has prompted an explosion of international exhibitions [2].  These exhibitions, mainly biennials and triennials, have also gained a reputation as powerful forms of cultural communication and manifestation.

The advent of the international biennial/triennial is not the only new phenomenon. It is interrelated with a series of other developments in the art world, such as the emergence of global curatorial discourse, the vanishing boundaries between art and non-art categories, and the rise of contemporary art from non-Western countries such as Africa, Asia, and Latin America [3].  Biennials and triennials outside the West, such as the Havana Biennale, the Istanbul Biennial, the Johannesburg Biennale, the Kwangju Biennale, the Shanghai Biennale, and the Yokohama Triennale, have become new sites where cutting-edge issues of contemporary art are defined and contested. It has been argued that these international exhibitions are dissolving the historically established boundaries between Western centre and non-Western periphery and putting the structure of the global art world under a process of reformation [4].  Furthermore, in recent years a few leading curators have come to envision the international biennale as an experimental apparatus for global-level social transformation that might crumble all established national, geopolitical, racial, cultural, and disciplinary boundaries [5].  Since the 1980s, the master narrative of Western art history has been criticized by art historians who are informed by theories of post-structuralism, post-colonialism, feminism and multiculturalism. The emerging biennial/triennial discourse seems to be the final blow that fundamentally calls for the abandonment of this already discredited narrative.

In its involvement with the utopian idea of breaking down old structures and constructing new, the international biennial/triennial has been perceived as an agent of change. It has been charged with the significance of being a symbol of cultural advancement and artistic innovation and an indicator of global status and visibility. Seeing themselves inseparable from an increasingly globalized world, Asian contemporary art communities necessarily share this perception about the biennial/triennial. This largely explains its proliferation in Asia. In the meantime, the great interest in establishing biennials/triennials has also been facilitated by the rapidly growing economic power of many nations in Asia. As pointed out by curator Melissa Chiu:

The emergence of periodic contemporary art exhibitions across Asia coincides with growing regional prosperity. This is more than coincidental, particularly as most, if not all, of the Asian biennales have been funded by ambitious local city governments eager to promote themselves as regional cultural hubs [6].

Equipped with expanding social affluence, many countries in Asia are eager to participate in top-level international programs and to join global cultural competition. In China, one of the most recent rising economic powers, the pattern of this connection between economic growth and an interest in holding international biennials is evident. Five exhibitions of this kind have appeared in Mainland China since 2000 [7].

Since the concept of globalization became popular in the latter half of the 1980s, some scholars became concerned about the increasingly global domination of Western culture (mainly American mass culture) and practice at the expense of local diversity and identity. For example, Hou Hanru suggests that the popularity of biennials and the utopian discourse around biennials has unfortunately accelerated the process of commercialization of the art world, resulting in the monopolization of a few central institutions [8].  Furthermore, he argues that the monopolization of these institutions in turn has brought what he describes as, ‘homogenization of the global visual experience and environment’ at the price of the expression of differences in local cultures and experiences [9].  His concerns carry considerable weight. The proliferation of biennials and triennials in Asia does seem to be an example of globalization, in the sense that this single model is sweeping over Asian contemporary art. In addition, similar groups of artists are invited to show their art in exhibitions across the world and we see the names of a few star curators appear again and again in many biennials/triennials, all of which have inevitably resulted in the repetitive showcasing of familiar artworks.

However, within this seemingly homogenized production of art exhibitions we also see active local responses and appropriation of this global trend. The actual operation of many biennials and triennials in Asia has called into question the assumption that Asian communities follow global trends passively. Quite a number of these exhibitions have been formulating agendas that aim to transform the established norms and practices of the international art world, from bringing up issues and concerns that are relevant to major local/national artistic traditions, cultivating and promoting local art and culture resources, to formulating new relationships between artists and locals. In doing so, they are also shaping their own unique identity and maintaining the significance of local expressions. In other words, when it comes to actual procedures, Asian biennials and triennials are by no means simple transplantations of this Western initiated exhibition model.

There are other examples that show Asian communities’ desire to create an international biennial/triennial that works for their particular interest and situation. For example, the Busan Biennale’s emphasis is on promoting Korean art culture and improving the international status of Busan’s art [12]; the Yokohama Triennale seeks alternatives to create a new relationship between art and public as a way to challenge the conventional style of art exhibitions [13];  the Guangzhou Triennial focuses on theoretical interrogations as a way of exploring the critical vision of curators and artists [14];  the inaugural Singapore Biennale utilized local religious sites and historic buildings to demonstrate the social values of Singapore people of multiple ethnic groups [15].

One cannot ignore this kind of active local reinterpretation and reformulation of international trends, which shows dynamic interactions and multifold flows between the local and the global. It is apparent that the motivations and approaches of many biennials and triennials in Asia vary greatly and seek to avoid creating similar global visual experiences. Indeed, although these biennials/triennials owe their birth to the rapid process of globalization, their diversified motivations and goals challenge the idea that cultural globalization is a one-way flow. On the contrary, these biennials/triennials have brought tremendous creative energy and local diversity into the family of international exhibitions and they have functioned as active forces that are shaping and reshaping the structure and relationship of the global art world.

1. Sheila Croucher, Globalization and Belonging: The Politics of Identity a Changing World, Rowman & Littlefield, 2004, pp 10–19.
2. Charlotte Bydler, The Global ArtWorld Inc.: On the Globalization of Contemporary Art, Uppsala, Uppsala University, 2004.
3. Tim Griffin, ‘Global Tendencies: Globalism and the Large-Scale Exhibition’, Artform, vol. 42, issue 3, November 2003. pp 152–167.
4. Ibid.
5. Here I refer to curators such as Francesco Bonami, Okwui Enwezor, Hou Hanru, and Hans-Ulrich Obrist who have involved themselves in the discourse of curatorial globalism. In particular, Hou Hanru has been very active in promoting new types of art that are multi-transdisciplinary and multi-transcultural and which can serve as transformative tools. See Hou Hanru, On the Mid-Ground, Yu Hsiao-hwei (ed.), Hong Kong, Timezone 8 Limited, 2002.
6. Melissa Chiu, ‘Asian Contemporary Art: An Introduction’, Oxford Art Online,
http://www.oxfordartonline.com/public/page/asiancontintro.
7. The Shanghai Biennale was established in 1996, but it was in 2000 that it became internationally oriented.
8. A main example given is the expansion of the New York Guggenheim Museum to cities such as Berlin, Bilbao and Venice.
9. Hou Hanru, ‘2000 As the Theme’, in On the Mid-Ground, op. cit, pp 126–137.
10. For detailed analyses of the staging, curatorship, and Chinese characteristics associated with the Beijing Biennale, see Meiqin Wang, ‘The Beijing Biennale: the Politics of Chinese Characteristics’, Yishu: Journal of Contemporary Chinese Art, vol. 7, issue 4, 2008, pp 20–31.
11. At its inauguration in 2003, there were debates about whether the Beijing Biennale was a real international biennale. These debates centred on the idea that an international biennale should not limit itself to only painting and sculpture.
12. For more information, visit http://www.busanbiennale.org/2006_new/eng/.
13. For more information, visit http://yokohamatriennale.jp/2005/en/.
14. For more information, visit http://www.gdmoa.org/zhanlan/threeyear/shannianzhanlink/.
15. For more information, visit http://www.singaporebiennale.org/2006/index.html.

Meiqin Wang is an assistant professor of Asian art history with a specialization in contemporary art at California State University Northridge. 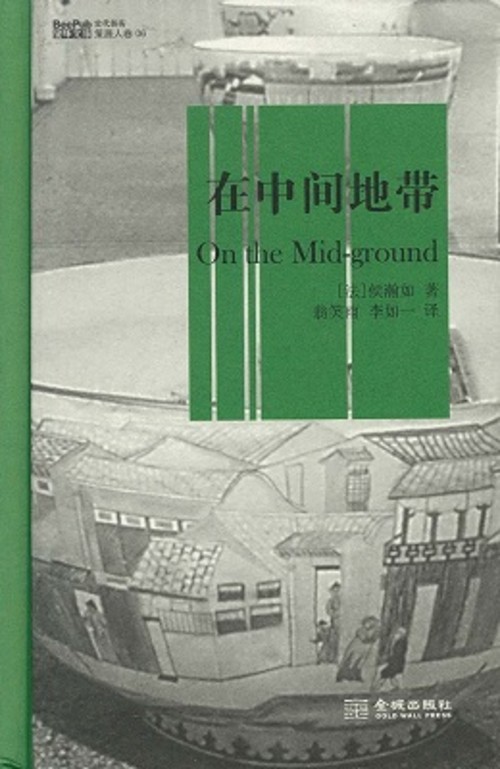 On the Mid-Ground
Reference