“In Yogyakarta, a cultural city home to two million inhabitants and the largest art institute in Indonesia [Indonesian Arts Institute], there are ten alternative exhibition spaces. Jakarta, on the other hand, the capital of Indonesia has 14 million inhabitants, but due to high rental and other overhead costs, has fewer alternative space (about five), and is dominated by commercial galleries (about thirty in total)” Mella Jaarsma, co-founder of the Cemeti Art House, sketched the city upon her portrayal of the vibrant artscene of Yogyakarta in a conference held in Hong Kong in 2001 (1asapce, 2002: 67).

“Yogyakarta deserves to be dubbed the city of artists as it hosts 650 superb artists, 400 of them painters, not to mention numerous beginners or fine art students who have yet to make a name for themselves.” Sri Wahyuni writes in The Jakarta Post, 8 January 2002.

From these bits and pieces of information, I pieced together a picture of Yogykarta in my head prior to my trip, which was principally to focus on visiting alternative art spaces and examining the archival setup of the Cemeti Art Foundation in collating contemporary Indonesian art.

Yogyakarta, the Yogyakartans call it “Yogya”, was once the capital of Indonesia before 1949. Located in the South East of the Java Island and one-hour flight from Jakarta, the current capital of Indonesia, Yogya ranks merely the top tenth city in this country as far as population and economy are concerned. Yet, in art terms, it is believed to be the number one city nationwide. It is a city in which most Indonesian artists aspire to study, work and live, as exhibiting opportunities and art markets at both regional and international levels are within a reachable distance.

On the road from the Yogya airport to the downtown, a building the shape of banana leaves captured my attention. Later I found out that it is the Affandi Museum, which is the home and studio of Affandi (1907 - 1990), a modernist painter of international fame from Yogya, and houses a collection of Affandi's artwork. The quick encounter of that unique architecture upon my arrival marked my instant admiration for this cultural city.

Visiting the Cemeti Art House (formerly the Cemeti Gallery) is perhaps the first and best place to get oneself oriented in the alternative art scene in Yogya. The CAH, noted for organising solo shows for young artists whose works are experimental, has been active and visible since its establishment in 1988 by artist couple Nindityo Adipumomo and Mella Jaarsma. With 11 shows per annum and consistently exhibiting for over a decade, the CAH has almost single-handedly shaped a conducive and intensive art climate in Yogya. A few years ago, the CAH started to stage thematic exhibitions in conjunction with one-person shows.

When the activities of the then Cemeti Gallery developed at an increasing speed, there was a realisation that an institution to manage art practice on a broader scale was required. The Cemeti Art Foundation was, therefore, established in 1995, which aims to develop, support and promote contemporary Indonesia art and other related field of arts. Now, it has become the most comprehensive research centre on the subject.

Year 2003 sees the 15th anniversary of the Cemeti Art House. In February 2004, an anthology entitled Exploring Vacuum was published to celebrate the occasion in which the CAH’s position and role in the art ecology of Indonesia are discussed and reflected upon. “Has this institution become hegemonic, is it defending the establishment, building ivory towers, piling up money for the monarchy by chopping down forests; or is it opening the way for regeneration, growth, building self-confidence, nurturing and cultivating a critical-analytical, but at the same time, humanitarian attitude?” (Press Release of the book launch)

Of these, I found the Benda Art Space particularly attention-grabbing with its positioning as a “things gallery”. Benda means “object” or “thing” in Indonesian. Founded in 2000 and inheriting the strong craft tradition in Yoyga, the Benda Art Space views itself with much aplomb as a site for cultivating the three-dimensional art-forms - through exhibitions, workshops and discussions, with no discrimination to objects, crafts and sculptures.

The Ruang Mes 56’s existentialist temperament is somewhat arresting. Living, working and exhibiting at Jl. Kolonel Sugiyono 56 – the former location of an army house, the group named itself Ruang Mes 56 when it was established in 2002. Indeed, the artists simply utilise the corridor as exhibition space. Being a participating art group at the Yogyakarta Biennale 2003, they pushed the boundaries of photography with a work entitled “Cool and Famous”. By taking snaps of audiences to the exhibition – some are celebrated figures in the Indonesian artscene, the work came into existence as the Biennale went on, and the notions of photographs as art or documents were questioned.

Founded in 1997 by artist Agung Kurniawan (one of founders of the Cemeti Art Foundation), the Kadai Kebun Forum is an art space containing a café, a gallery, and an alternative theatre. At the time I visited the space, its newly renovated building was just completed, and once suspended programmes such as music, dance performances, exhibitions, literary events and the like were under planning again.

One of the individuals most mentioned to me in Yogya is Dr. Oei Hong Djien, who is a medical doctor and also an avid collector of contemporary Indonesian art. His mansion in Magelang, a city one hour from Yogya, is a museum per se, by housing a huge collection of artworks.

During this trip I managed to visit two artists’ home/studio – that of Heri Dono’s and Agus Suwage’s. After 12 years as a graphic designer, Agus Suwage left Jarkarata and moved to Yogya which is closer to his home town, Purwoerjo, Central Java, and he has now made Yogya his permanent home.

Visiting Heri Dono’s home and workplace (he has a studio somewhere else) was a visual pleasure, I immersed myself in the whimsical objects he had created and collected. That evening, Heri Dono was frequented by traditional puppet-drama (Wayyang) players and art professionals such as Biantoro Santoso (owner of the Nadi Gallery) and independent curator-cum-writer Rizki A. Zaelani and Hendro Wiyanto.

Though his parents and grand parents were from Yogya, Heri Dono was born in Jarkarta. “When I first came here to study in 1977, I immediately got the feeling that people here like art – you could tell simply from how people like to decorate their gates. Also, artists here are proud being an artist. They have no money but they are bursting with dreams – making art.” Heri Dono recalled.

For similar reasons, Yogya attracted young artists to flock in. Sujud Dartanto of the Benda Art Space grew up in an island of West Java and lived in Jakarta before locating to Yogya when he was a student at the ISI. He continues to reside and work in the city, as he explains, “Yogya is a small place, so many places are easily accessible, the art gallery, museum or friends are within half an hour of a motor-ride. Unlike Jarkarta, which is a big city and difficult to get yourself oriented.”

Since the 1990s, Indonesian contemporary art has been experiencing a boom, of which Yogya has been playing an essential role. This Yogya phenomenon is the main thrust for the book Outlet: Yogyakarta within the Contemporary Indonesian Art Scene published by the Cemeti Art Foundation. After the five-day visit, a vivid picture of Yogya’s art scene looms in amid my frequent, short taxi rides through the city to catch my appointments at various artspaces. 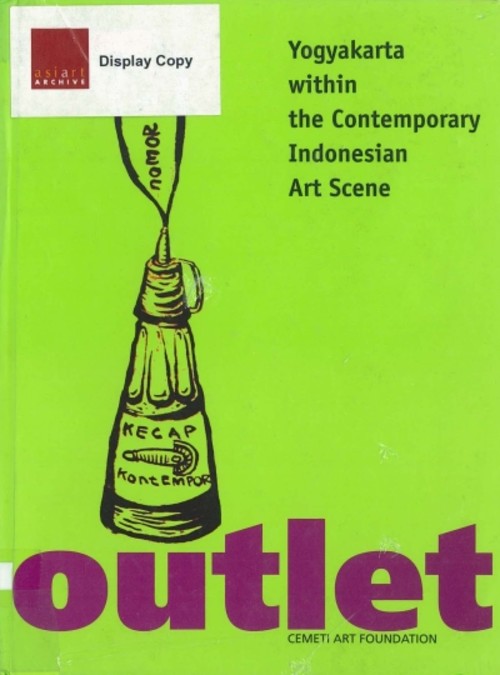