The "Great Leap Forward" of Culture in the Pearl River Delta

Artist Yang Jiechang recently designed a flag for the Pearl River Delta (PRD) region, on which is written "We are good at everything except for speaking Mandarin. PRD." Yang Jiechang is originally from Fushan of Guangdong Province and currently lives in Paris. This PRD flag is the work he is proposing for his participation in the upcoming Guangzhou Triennial.

Behind this Cantonese humour lies the reality of the "Mandarinisation" of the region as a result of CEPA (Closer Economic Partnership Arrangement), where Hong Kong, Macau, and the PRD will be incorporated in a unified metropolitan circle. The GDP of this "greater PRD" is almost twice that of the Yangzi River Delta. The implementation of the so-called "Pan-PRD" plan (shortened to "9+2", that is, a super economic circle made up of nine provinces including Guangdong, Fujian, Jiangxi, Guangxi, Hainan, Hunan, Sichuan, Yunnan, and Guizhou, plus Hong Kong and Macau) has brought to this region infinite economic imaginaries. Thanks to the flow of a population driven by economic opportunities, Cantonese is no longer an obstacle for communication; and in a "city of immigrants" like Shenzhen, Mandarin has absolute superiority. In his fictional novel Sport's Class, Hong Kong writer Tung Kai-cheung demonstrates the possibility of using colloquial language (Cantonese) for literary expression, and thus re-examines the cultural and sociological nature of underprivileged languages.

Image: Shao Fei, Winter.
For reference/educational use only.

Rem Koolhaas is one of the earliest Western architects who studied the process of urbanisation in China from an international point of view. Great Leap Forward is a book that records the results of his research with Harvard Universirty on a cluster of cities in the PRD between 1996 and 1997, in which Koolhaas further proposes the notion of the "city of exacerbated difference." Almost ten years later, he finds himself back in the PRD and has this time brought along with him an architectural proposal for the Times Museum of the Guangdong Museum of Art, spurred on by the Guangzhou Triennial. In the sketch for this museum, Koolhaas applies many of the theoretical inspirations from his project ten years ago: he proposed the art museum be integrated into an existing residential building so that it will be able to absorb contents related to commerce, culture, and social urban living, and thus become a "space of exacerbated difference."

The Second Guangzhou Triennial opens on November 18 and will no doubt attract attention to the PRD, a land of endless possibilities. The curatorial team made up of Hou Hanru, Hans Ulrich Obrist, and Guo Xiaoyan (Guangdong Museum of Art) came up with the title "Beyond" for the exhibition. "Beyond" refers to the specific cultural and artistic phenomena and styles developed in new social and economic models and conditions, especially those that have come about as a result of modernisation in China and non-Western countries due to the profound impact of globalisation. The curators have taken the PRD to represent a new spatial strategy, economic format, and living style. They will attempt to use this "special space" as a platform for new artistic experiments or practices, and as a laboratory to reflect and research modernisation and the development of contemporary art in China. 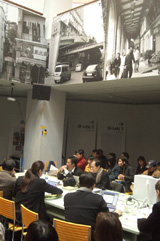 Image: D-Lab 2.
For reference/educational use only.

To alter the monotonous exhibition format, Delta Laboratory (D-Lab) was launched in November 2004 at the Guangdong Museum of Art and has seen over ten workshops in four stages, all of which were open to the public and centred around issues of sustainability of cities, and cultural and artistic developments. It could be said that the exhibition part of the Triennial is in essence a presentation of the activites that have taken place in these labs, so that "the exhibition itself is no longer just an exhibition, but more an incentive, and can operate and renew on its own as a machine" (Hans Ulrich Obrist). The exhibition this November will see the staging of more workshops, two in Guangzhou and one in Hong Kong, and over a hundred artists, artist groups, and self-organised spaces will participate in different sections to include the "Main Exhibition," "Self Organisations," and "Special Projects." While the exhibition only runs until January 15, 2006, there are plans for D-Lab to continue.

In response to the concept of "decoding the complexity of PRD with interdisciplinary methods" proposed in this Guangzhou Triennial, an annual international photo festival entitled "Dual Visions: Starting from Lianzhou" opens at around the same time in Lianzhou, a peripheral city in Guangdong Province. The first annual Lianzhou International Photo Festival has an academic committee of 25 people with Yang Xiaoyan as its Academic Curator and Director. The exhibition tries to reveal the duality in historical and humanist development through an image-based visual display that contains different types of media, and by focusing on one particular region. This exhibition provides a comprehensive discussion about major issues, such as how people understand images and the relationship between the visual and society, nationality, regional culture, and globalisation.

Image: Zeng Han, Window of the World.
For reference/educational use only.

Lianzhou is located in the north of Guangdong, 230 kilometers from Guangzhou, and situated on the border of Guangdong, Hunan, and Guangxi, thus an important point of traffic among these three provinces. Thanks to the unique geographical position of Lianzhou, the culture from central and southern parts of China are able to coexist here. More than just a connecting point between the centre and the periphery, Lianzhou also provides a platform from which to interpret the duality of modernity, which is one of the curator's purpose with the exhibition. Subsequently, this photography exhibition introduces all sorts of observations from the angles of sociology, urban studies, anthropology, and art studies. They intend to showcase the charm of photography to the public, as well as demonstrate the social functions and force of imagery.

During the exhibition, the entire Lianzhou city will become an exhibition space. Worth noting is the inclusion of a selection of works by Shao Fei, a famous Chinese war photographer and the founder of revolutionary photography of the Chinese Communist Party, combined with a documentary and seminar on his life. Shao Fei was a tragic figure who left behind a great number of photographs of the brave battle scenes of the Eighth Route Army, which are important historical documents of Chinese anti-Japanese war. This annual exhibition has received great support from the Lianzhou Municipal Government, who believe it is one way in which to raise the reputation of Lianzhou city inside and outside of China. It is yet another example where economic and cultural imaginaries are combined in the PRD region.

This relationship between culture and economics will be one of the major issues discussed in the seminar "D-Lab (HK): Trading Places: Cultural Imaginaries of the Pearl River Delta," a programme of the Guangzhou Triennial on 21 November at the Hong Kong Arts Centre, organised by the Art School of the HK Arts Centre, Asia Art Archive, and the Guangdong Museum of Art. It will look at the cultural construction that has taken place under the high-speed economic development in the region and propose cultural imaginaries for the future.

In fact, in the Overseas Chinese Town of Shenzhen, the trend of renovating old factory spaces like the 798 District of Beijing seems to be taking shape with the opening of OCT Contemporary Art Terminal (OCAT). "Forest of Steles: Retranslation & Rewriting of Tang Poetry," Gu Wenda's solo exhibition curated by Huang Zhuang, opened earlier this week and marks the beginning of an exciting month in the PRD, full of possibilities for a cultural "Great Leap Forward." We might even consider temporarily modifying Yang Jiechang's slogan on the PRD flag to read "We are good at everything. PRD."