The Unsettled Pleasures of Viewing: Exhibition as a Meeting Point Between Our Bodies and Artwork

This text collects fragmented notes related to my ongoing research on exhibition making in China. Part of this research has been compiled in the book A History of Exhibitions: Shanghai 1979–2006 and will soon launch in the Asia Art Archive website looking at artist-organised exhibitions in Shanghai between 1979 and 2006. The selection of exhibitions in the above mentioned archive is focused primarily on group exhibitions with a select number of solo exhibitions in which the artists had a specific interest in rethinking the way artwork was promoted and presented in public.

When talking about exhibitions, it is impossible not to think about institutions, so this text also hints at how the museum as an institution has been introduced to China. Today, exhibitions rather than museums act as the site of knowledge production, illuminating the very different role museums have in relation to the Western art historical context in which museums, the development of modern art, and the study of art history were and are still interconnected.

Furthermore, the notion of the white cube space that was introduced in the West after World War II was deeply linked to the institutionalisation of art; whereas in China, the white cube would not be introduced until after 2000 when it was closely linked to the commercialisation of the art scene. By re-visiting past exhibitions, we can understand their impact on exhibition making practice.

While the text below provides historical background for the images, the purpose of this essay is to encourage the reading of the images themselves. The images reveal the rarely described dynamics between exhibitions, viewer, and his/her body. The images suggest that an exhibition can be experienced not only intellectually, but also sensually, emotionally, and even sexually. Neither institutions nor artists can impose such direct and uniquely individual experiences. While studies have been made to map out and analyse these responses, it is difficult to capture and recreate the intimacy and immediacy of the relationship between work and viewer. I hope that these images provide a fragmented reading of that direct experience, and help to bring exhibition experience in to exhibition histories. 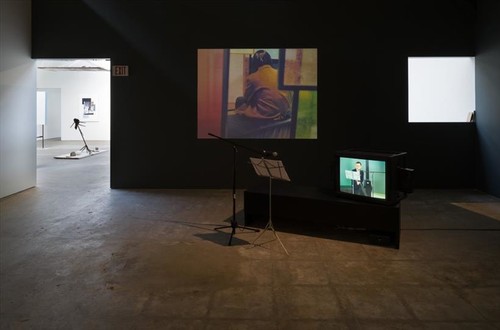 Established 200 years ago, a new exhibition ritual specific to democratic capitalist nations formed a set of values and parameters fundamental to western societies: a linear notion of time, the increased estimation of the individual, production of the material object, and its circulation through commerce. Similar to an exhibition, the museum provides structure for social governance and defines the space for ritual. In the above mentioned aspect of exhibition ritual and its core characteristics, I would also like to add that exhibitions ritualised the act of public viewing of the object.

Describing a Chinese artist's visit to a museum in Europe, Li Ran's work Continue to Write a Story in the Exhibition Hall argues that, rather than discourse, it is the very experience of the museum and the learned practice of exhibition viewing that introduced modernism to China. While I would argue that discourse and vivid exchange have existed for centuries, I agree with Li that the exhibition remains the most active vehicle of knowledge production in recent Chinese art history. Exhibitions are the very moment when works become public, and, when publics become "the public."

Early museums in China, established mostly by foreign entities, could be described as natural history museums, which also occasionally presented exhibitions of traditional Chinese painting and porcelain. In these museums, one can clearly identify a strong connection to the tradition of the Natural History Museum as conceived in Europe, as well as the so-called "curiosity cabinets" which attempted to present the world as a singular whole and likewise examined China as such.

The first domestic art museum in China was established in 1905 by Zhang Jian, a local entrepreneur and reformist, in the town of Nantong in Jiangsu Province (today a two-hour bus ride from Shanghai). In 1895, he proposed to the Qing Dynasty Court to build a museum in the capital city of Beijing as well as in each province across the country. Today, over one hundred years later, Zhang Jian's dream has partially come true. On average, nearly 100 new museums are being built annually across the country. During 2011, that figure reached a staggering 386 new museums—more than one per day. 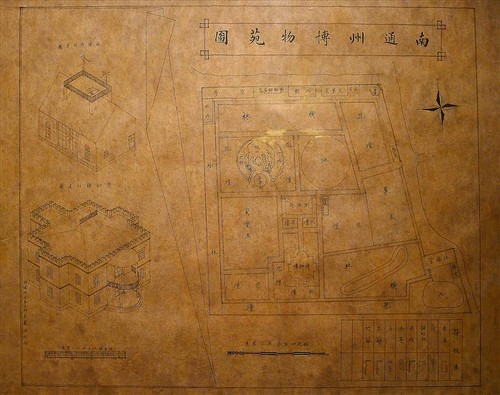 The Daily News from May 1939 writes: "The exposition organized by Heude Museum to commemorate the 70th anniversary of its foundation continues to have outstanding success. Everyday, even before the door’s open, there is a long queue of people waiting to rush into various exhibition halls. 55,000 visitors have been registered for the first week." Image: Feature in The North-China Daily News, 21 May 1939. Reverend Father Piel, Director of the museum, addresses the guests attending the function held in the museum building, 221. Av. Dubail.

The North China Daily News also announces visitor numbers in its report on the RAS Shanghai Museum on June 6, 1939. The article titled "Greater Interest in Shanghai Museum—Record Number of Visitors During May, Campaign to Wipe Out Society Debt" states that "Interest in Shanghai Museum (RAS), one of the major activities of Royal Asiatic Society in this city, appears to be increasing by leaps and bounds especially amongst Chinese of the student class. During May, the number of visitors to this institution was 8,256, which is over 2,000 more than in April, itself a record month." Around the same time as these reports circulated on large-scale institutions, avant-garde artist groups around the country attempted and struggled to present self-organised exhibitions and draw audiences. According to artist Pan Xunqun, Storm Society's first exhibition in October 1932 that took place at Shanghai's Chinese Arts Students Society "was rather poorly located for drawing the attention of the general public and had inadequate light for showing the paintings." Storm Society continued to have exhibitions although the venue changed and the audience was limited to students and "friends from cultural circles." What actually expanded the outreach of these early avant-garde artists toward a larger audience was not an art museum, but a magazine called The Young Companion Pictorial which published works of contemporary artists regularly at that time, and through its content, ranging from lifestyle to art and culture, attempted to foster a yet-to-be-developed Chinese middle class. The Young Companion served as an exhibition platform for these avant-garde movements as well as a meeting point where a larger audience would encounter works of these artists for the first time. Salon to Biennial: Exhibitions That Made History Volume 1 starts with Edouard Manet's quote: "To exhibit is to find friends and allies for the struggle." Like the avant-gardes in early twentieth-century China, artists of the 1980's also struggled for an audience. There is little available information of the audience they did have. Many early exhibitions kept notebooks in which visitors signed their names and left comments, but none of them have survived. From images published in A History of Exhibitions: Shanghai 1979–2006, we can surmise that the audience was comprised mainly of artists' peers and close circles. As such, exhibitions became an important site of communication and sharing between artists.

The 1979 Twelve Men Painting Exhibition has symbolic historical significance as the first artist-organised exhibition after the Cultural Revolution. According to Chen Juyuan, one of the organisers and participating artists, 2,000 people visited this exhibition per day, not all of whom were friends or peers of the artists. They eventually extended the exhibition period in response to its popularity. 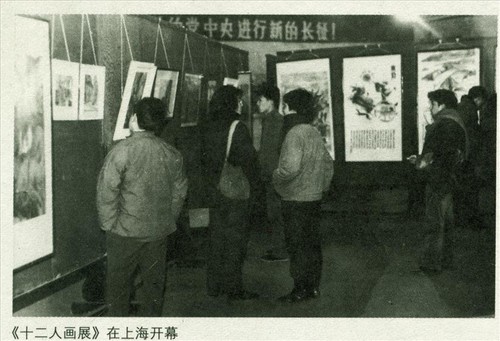 During the 1980s, it was often difficult to differentiate between viewers, participants, and artists. Many artist-organised exhibitions after Twelve Man Painting Exhibition made no clear distinction between viewer and artists officially participating in the exhibition. In the 1986 Concave-Convex Exhibition, the first exhibition in Shanghai to present a new concept of sculpture (what we would today interpret as installation and artists' attempts to create work in relationship with site), the Shanghai-based artist Yang Hui invited himself to participate. He made a series of interventions on-site, including the destruction of one of the other sculptures in the exhibition, tying up other works with rope, tying audience, etc. First Exhibition of Nudes held in Shanghai Art Museum in 1988 was another rare example in the 1980s of an audience made up of people outside the artists' circle of peers. Gong Jianhua's beautiful, but also disconcerting photographs of this exhibition show males gazing at female bodies in the oil paintings. The exhibition became a site that reveals certain emotional aspects and desires that would not ordinarily exist in the public realm. The exhibition moved parameters of acceptance—what should or should not be presented in public in China. According to many reports related to this exhibition, Shanghai mayor Jiang Zeming made a visit to the exhibition in order to legitimise its importance, which hints at the important dynamic and power that exhibition had within the larger social framework.

In the September/October 2014 issue of Yishu Journal of Contemporary Chinese Art, Yang Chao states in his interview with Zheng Shengtian, that family and state constitute Chinese thinking entirely, and that there is no cultural space beyond it. Tied to neither, exhibitions exist temporally and spatially outside the two poles that frame life in China.

When I asked German artist Alexander Brandt, who organised many important exhibitions in Shanghai with Yang Zhenzhong, Xu Zhen, among others, to describe the audience that attended exhibitions organised in China from late 1990s–2006, he answered that he perceived that while the artists were getting progressively older, the audiences were getting younger. This demography is very telling of contemporary art exhibition audiences: It seems as though audiences, then and now, consist of young students or recent graduates who follow art-related events only for a certain time, eventually stopping after establishing their own families. In the last decade, the emerging Chinese middle class has increasingly embraced viewing exhibitions as a social ritual, usually as a consumer act that is encouraged as part of an individual’s social activities. Museums take these viewers as numbers—as a statistic hoping to break potential attendance records, turning people into masses and abstract economic charts.

The majority of exhibitions hope to raise the number of visitors who take selfies and immediately upload the images online to grow the museum's popularity. While this culture presents an interesting form of exhibition documentation, it seems that the viewers' direct experience with the artwork exists only at the precise moment the photo is taken—often with their backs to it, and not a second more. Exhibitions continue to turn into the static format of objects presented in a white cube space, providing ritualised structures that propose certain rules for behaving and "pressing the button" routine as Zygmunt Baumann states, distancing the viewer from their imaginative capacity, forgetting that every exhibition is a unique situation to encounter.

Biljana Ciric is an independant curator based in Shanghai.