During the residency, Iftikhar Dadi (in collaboration with Elizabeth Dadi) created light sculptures for a new body of work sparked from neon signs permeating the Hong Kong skyline and culminating in an open studio presentation at Spring Workshop.

Iftikhar Dadi also gave a public talk on the role of artist-teachers in the development of art schools in South Asia, and helped shape Innovation Through Tradition, a two-day AAA workshop that speculated on the parallels between Chinese ink, Arabic calligraphy, and Indo-Persian miniature. 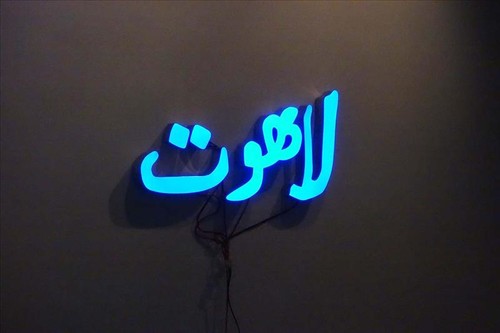 Iftikhar Dadi (in collaboration with Elizabeth Dadi), from the Homo Ludens series, 2014.
Courtesy of the artists.

Iftikhar Dadi is Associate Professor in the Department of History of Art at Cornell University and was chair of Cornell's Department of Art (2010-2014). His many writings on the emergence of the modern and contemporary art of Muslim South Asia can be found in his research on the relation between art practice in the contexts of globalization, urbanization, and mediatization. He has authored numerous scholarly works, including the recent book Modernism and the Art of Muslim South Asia (2010).

As an artist, Iftikhar Dadi works collaboratively with Elizabeth Dadi. Their work investigates popular urban and media cultures in constructing memory, borders, and contemporary identity and has been exhibited internationally.

Iftikhar Dadi's residency is presented in partnership with Spring Workshop.