This catalogue is produced in occasion of Hong Kong artist Kacey Wong's solo exhibition at AJC Gallery in March 2015.

'Employing humour and sarcasm, the enquiries central to Wong’s practice around political issues are developed through installations and images as is his role in initiating, engaging and collaborating with the public in order to generate momentum in social discourse. Inspired by Hong Kong’s recent dramatic change in political climate, Wong considers the phenomenon of “Absurdity” in Hong Kong, our response to it and the nature of happiness.

Wong plays a participatory performing role in public demonstrations including Hong Kong’s 1st of July Marches exploring the scope to bring radical change to society through art. As an artist Wong consciously subverts the assumption of productivism employing rather action, sculpture, situation, language and character generating a collection of creative encounters.' - from gallery's website.

The book consists of documentations of several projects Wong undertook during these few years as related to protest and civil demonstrations in Hong Kong, including a transcript of an open lecture he gave during the Umbrella Movement. 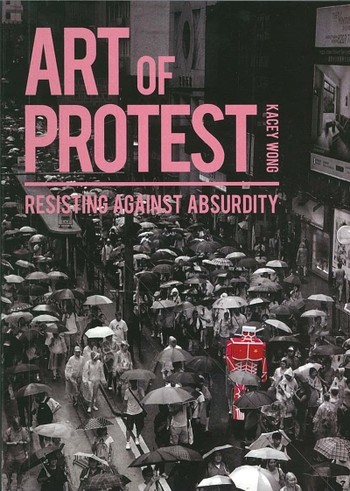