This monograph of Meena Park showcases a body of work produced over a period of ten years from 1995 to 2005. Most of Park's work is grounded in a series of research activities that she terms as 'false science'. Lee Chungwoo writes, 'Since 1996, Park has consistently "researched" a new way of representing the world through painting. Her paintings could even be called the "invented history of new painting", a history that answers to a completely new method of representation, which could also be called a "conceptual form of visual perspective". Using a method that is different from previous forms of painting, her paintings counstruct a realism of concjucture (meaning, a sign that forms a relationship between signifier and signified through manipulation).'

With artist biography and essay by Lee Chungwoo who gave a thorough analysis of Park's works, detailing each step of her 'scientific' methodology. Texts in Korean are provided in an attached booklet. 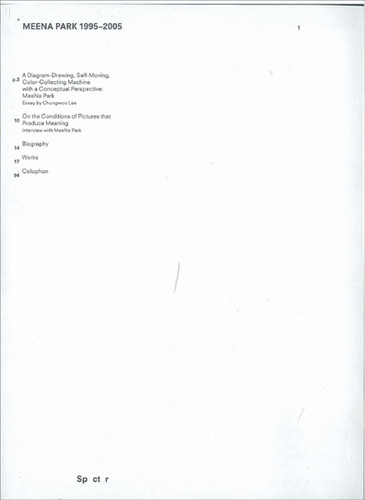