This catalogue is published to accompany the multi-faceted project Morality presented at Witte de With Center for Contemporary Art, Rotterdam in 2009 and 2010.

'While there are certain moral principles that are usually unquestioned, morality remains ambivalent and amorphous in terms of the principles it provides for humans acting in the world. It is these amorphous areas, these gray zones, that this project sought to address, particularly in how they form a difficult aspect of our reality today.

The Morality project was conceived as an invitation to reflect and debate situations in contemporary life that refuse clear distinctions between right and wrong, what is and what ought to be. As a whole, this project has been defined by a desire — inherent to contemporary art — to open spaces for active, engaged forms of spectatorship that are not predetermined by either moral or ideological imperatives.

Rather than presenting statements that can be perceived as being right or wrong, good or evil, the project Morality aimed to create a space for showing a wide range of attitudes that problematise a total conception of morality, focusing on the less tangible forces and attitudes that shape common thinking and behavior.

The year-long Morality program at Witte de With was structured as a series of interrelated Acts that began in the Fall of 2009 and ran until November 2010, including six in-house exhibitions. It also included the satellite exhibition Nether Land at the Dutch Culture Centre in Shanghai as part of the World Expo 2010. Also presented as part of the Morality project were: A film cycle tilted And the moral of the story is…; the performance program Let Us Compare Mythologies; the symposium Rotterdam Dialogues: Morality, that included master classes, and four interventions on Witte de With’s facade under the umbrella of “Between You and I.” Beyond the exhibitions, online visitors were invited to participate by contributing to a web-platform.' - from publisher's website.

Includes colour plates and descriptions of works in all the exhibitions and programmes. With texts by Aaron Schuster, Alev Ersan, Hu Fang, Michael Stevenson, and Peter Wachtler. Biographies of artists and curators are included.

Please note that only artists of Asian origin are indexed. This book is available as an e-book via Witte de With's online store. 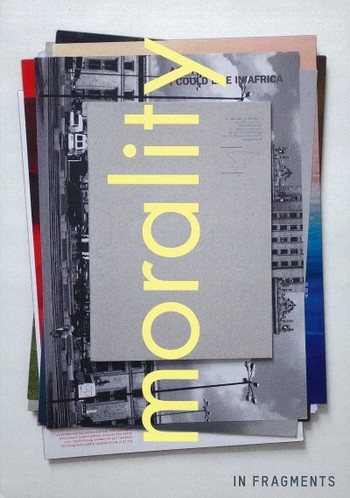