This publication is published on the occasion of Taiwanese artist Chou Yu-Cheng at Kaohsiung Museum of Fine Arts from October 2014 to January 2015.

To the artist this exhibition is experimental in nature, in the sense that it differs from the conventional museum exhibition setting to put tangible art object on display but to exhibit intangible works. In twelve works curated by independent curator Xu Jianyu, including an automatic piano playing compositions by Liszt, a security guard booth with a radio broadcasting local radio programmes, the exhibition showcases various aspects of the artist's life, for example his parents (his fathering being a security guard). The politics elicited from Chou's works point to a non-utopian realism that directly looks into how artists survive in the contemporary mechanism of art. This superficiality, according to the curator, corresponds to Chou's satire which creates an anti-critical, anti-depth space for the spectator, who is left behind in the large exhibition space filled only with a few objects to postulate the open question (not answer) asked by Chou.

Includes a biography of the artist.

Chapter headings
From Chou Yu-Cheng to Liszt: A Seven Year Profile of a Friend | 從周育正到李斯特：一個朋友的七年側寫

On Things Irrelevant to Art | 無關藝術的描述

On Things Relevant to Art | 關於藝術的描述 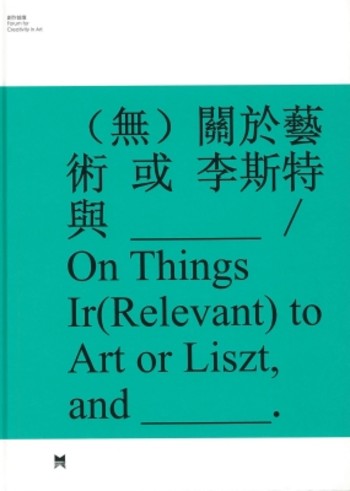