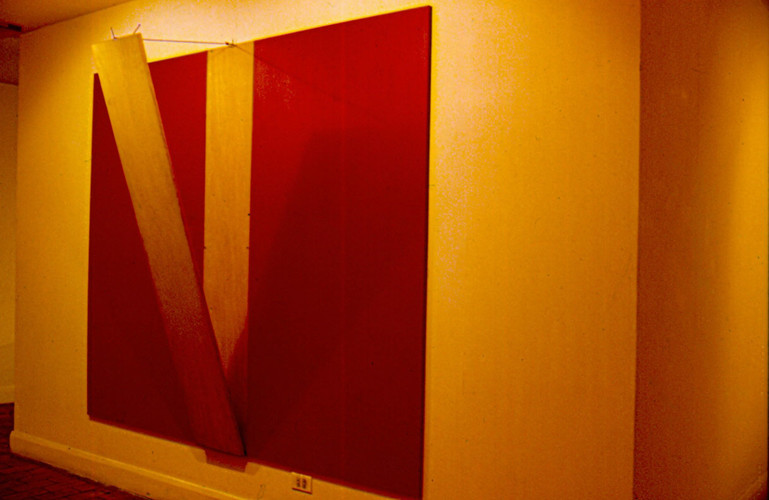 Photograph of one of Roberto Chabet's Four Red Works. The work is part of his solo exhibition, 'Cargo and Decoy,' at The Pinaglabanan Galleries from 10 November to 17 December 1989.

Excerpts from the press release for the exhibition, titled 'Chabet's Cargo at Pinaglabanan,' written by Roberto Chabet:

''Cargo and Decoy' is the third of a trilogy of exhibitions, which began with Russian Paintings in 1984 and House Paintings in 1986. The exhibition is made up of four large-scale works, each occupying one of the four rooms of the gallery. As in the two previous shows, Chabet uses what has become a signature material – hardware store-bought 4' x 8' plywood. It is a material which has become not only the surface and support of his paintings, but to a large extent its subject matter and content.'

''Cargo and Decoy' derives the title from one of the works. The reference is to the South Pacific cargo cult, in which stick and stone decoys of the white man's aircraft are made to attract the white man's cargo of material goods.'

Chabet explains that 'all art-making shares the illusory aspects of the cargo cult. This particular work, and whole exhibition itself, has to do with the recognition that the art object, which is often taken as a surrogate - a decoy - for reality, is itself reality.' He adds, 'however, meaning in art tends to shift unpredictably. In the wink of an eye, the real may revert back to a decoy. Often the art object as decoy - as illusion - seems more interesting.'

''Cargo and Decoy' is the last exhibition of The Pinaglabanan Galleries. After five eventful seasons, it closes its doors with a show by an artist who curated its inaugural show in 1984.'