'This book is about the artist Jungju An, who finds the energy for his art through travelling. Going around the world with a camera on his back, the observations he made on the countless and various people of 'difference' signified as to what can contribute to the world... While it seems that An's work would have a sense of rigidity as An made a relatively early debut in the art world in comparison to other artists of his age, his video works are sensational, filled with humor while presenting serious issues about paradoxical reality.' (p. 9)

Authored by art critic Shan Lim, this second volume of the Arko Media Critique Series features the various video art pieces by artist Jungju An, beginning with his first solo exhibition 'Video Music' (2005) to his most recent exhibition 'Honest Person' (2012). The book provides a comprehensive overview of the evolution of An as an artist, his process of documentation, and a close analysis of his technique, all accompanied by illustrations. Artist biography is included.
Access level 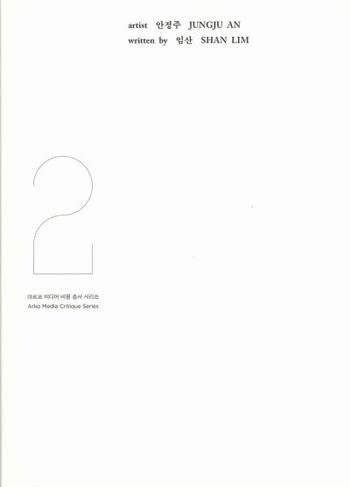