Catalogue of the exhibition REAL DMZ PROJECT 2012 held in border area near DMZ, in Cheorwon-gun, Gangwon-do, South Korea from July to September 2012.

'The Demilitarized Zone (DMZ) is a sort of a military buffer zone where arms are not allowed, which spreads 2 km each to the north and south of the Military Demarcation Line. The site of the 2012 project, Cheorwon in Gangwon-do Province, makes up around a third of the total surface area of the DMZ. It counts the widest and longest strip of the DMZ in its region. It was the scene of one of the hardest fought battles during the Korean War, and is today a place of military, strategic, and symbolic importance.

The title "Real DMZ Project" evokes the paradox of a so-called "demilitarized" zone that is, in fact, one of the most militarized zones in the world, which is in a constant state of confrontation and tension; the day that it really becomes demilitarized in the true sense of the word, it will lose its raison d’être. The 2012 exhibition follows the course of the Cheorwon Security Tour and it will include works by 11 contemporary artists who offer their own viewpoint on the divided reality of the Korean peninsula in today’s context. 11 of the participating artists have long been interested in the history of the DMZ and the division of Korean nation and its consequences, working on the theme over a period of time. Some will push their existing work further for the 2012 exhibition, while others will produce new works. The project hopes to provide an occasion to reflect on the true meaning of "demilitarization," its feasibility, and how we may envision our future.' - from organiser's website.

Please note that only Asian artists or artists who live and work in Asia are indexed. With artists statements and biographies. For more information, please click here.
Access level

Chapter headings
As We Begin the Real DMZ Project 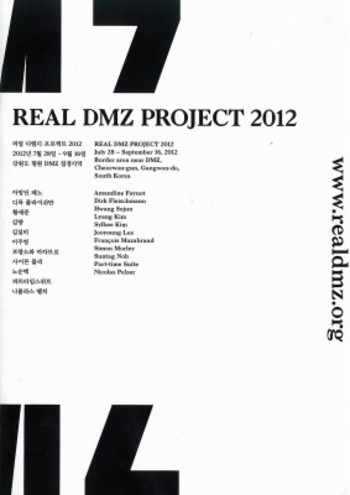