Catalogue published on the occasion of the 2012 New Museum Triennial 'The Ungovernables'.

'The 2012 New Museum Triennial features thirty-four artists, artist groups, and temporary collectives—totaling over fifty participants—born between the mid-1970s and mid-1980s, many of whom have never before exhibited in the US. "The Ungovernables," the second triennial exhibition at the New Museum, acknowledges the impossibility of fully representing a generation in formation and instead embraces the energy of that generation’s urgencies. These urgencies are formal and philosophical, material and ideological. They stem from the unique experiences of this generation who came of age in the aftermath of the independence and revolutionary movements that promised to topple Western colonialism. However, these revolutions became mired in military dictatorships, the emergence of integrated world capitalism, regional and global economic crises, the rise of fundamentalism, and international interventions as well as failures to intervene. Faced with this somewhat bleak inheritance, artists in "The Ungovernables" embrace their complex relationship to history and assert a remarkable resourcefulness, pragmatism, and hopefulness in their work.' (from New Museum website)

Includes introductory essays on individual participating artists, and colour plates of the artists' works.
Note that only artists of Asian descent will be listed below.

Where Do I Stand Now?

How to Feel a Leak?

Who Counts As Radical? Southern Revolutions and Their Inverted Mirrors

Another Sun is Possible 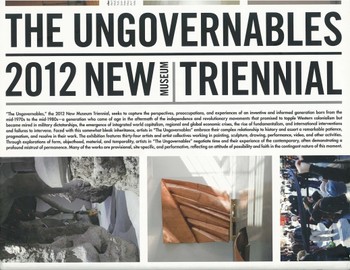 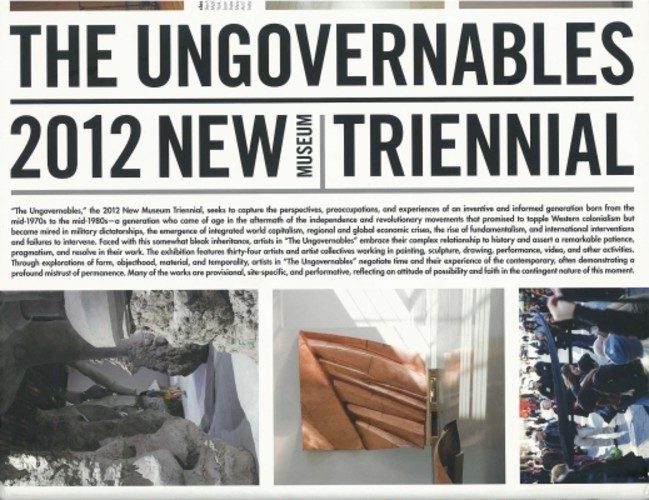