The Momentum Seminar Program 2004 was a collaboration between the Ofﬁce for Contemporary Art Norway and Momentum.

The subject for part one of the seminar, "How to Look at Aesthetics", was introduced by Ina Blom (associate professor, University of Oslo, Norway). In this part, Nicolas Bourriaud (co-director, Palais de Tokyo, Paris, France) and Alexander Alberro (assistant professor, University of Florida, Gainesville, USA) discussed very different but related aspects of contemporary art; Bourriaud discussed the legacy of his own terms "relational aesthetics" and "postproduction", while Alberro took a closer look at the heated debate on the 'return to traditional aesthetics' typical of recent art debates. Opponents were Lars Bang Larsen (art historian, Spain/Denmark) and Sara Arrhenius (director, IASPIS, Stockholm, Sweden).

The second part of the seminar, "How to Look at Capitalism" was introduced by Ute Meta Bauer (director, Ofﬁce for Contemporary Art Norway, Norway/Germany). Keynote speakers Roger M. Buergel (artistic director, Documenta 12, Kassel, Germany) and Sabeth Buchmann (professor, Academy of Fine Arts Vienna, Austria/Germany) both took avant-garde ﬁ lm classics from the early seventies as their starting point, thus locating their discourse on art and politics in the early stages of the globalized information society. This allowed them to discover some of the visual archetypes to which we still relate today. Opponents were Gertrud Sandqvist (principal, Malmö Art Academy, Sweden) and Eivind Røssaak (associate professor, Telemark University College; PhD candidate, University of Oslo, Norway).'—from the publisher's website 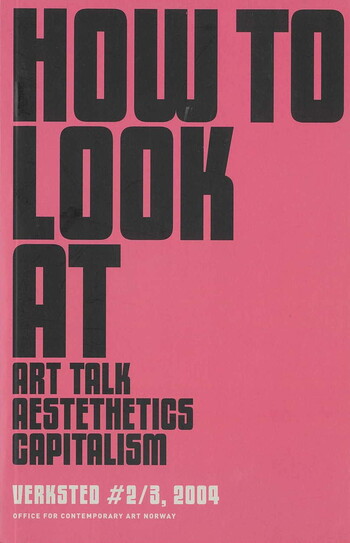 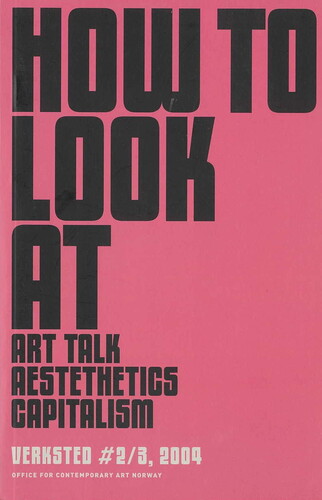