AAA Advisory Board member Nora A Taylor spoke with Singapore-based artist Loo Zihan about an event based on an account of an older performance by Josef Ng, the implications of such a work on the landscape of performance art in Singapore, and how the work differed when presented in Singapore vs Chicago...

AAA: On the evening of 19 March 2011, at the Defibrillator Space in the West Side of Chicago, you stood and read from a text, an affidavit written in 1993 by Malaysian-based artist and documentarian Ray Langenbach. It was an eyewitness account of a performance by Josef Ng entitled Brother Cane. After each reading, you performed what you read. The act was broken up in segments of time, alternating the reading of the text with the actions off the page or Josef Ng’s movements as described by Langenbach. Why did you choose to perform Brother Cane in Chicago?

Loo Zihan (LZ): My interest in Brother Cane was sparked many years ago. I first heard of the incident when I was 19 years old (nine years after the event) while going through the archives at a theatre company. I was taken aback as I had not heard about the restriction of licensing and funding performance art prior to this discovery.

I left to pursue my MFA at the School of the Art Institute of Chicago in 2009. The interdisciplinary nature of the programme allowed my practice to extend from the moving image to include performance. Chicago was the first time I spent an extended amount of time pursuing my practice overseas sans restrictions. I told myself that I wanted to realise projects that I have always wanted to execute but never had the chance to due to the restrictions and regulations in Singapore.

The main motivation for re-enacting Brother Cane in Chicago was to raise awareness about the state of the arts and censorship in Singapore. At the same time, I wanted to allow myself the opportunity to physicalise the memory of Josef’s performance, recuperating it via my performing body. 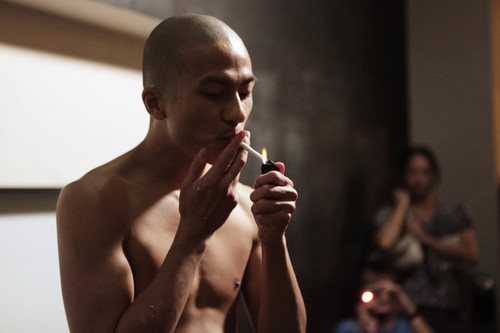 Another view of Cane, 2012, photograph by Samantha Tio
FOR REFERENCE / EDUCATIONAL USE ONLY

AAA: What influence does Brother Cane have on your current performance art practice?

LZ: In my moving image practice, I explore the politics of reconstructing a moment of personal trauma and shame. My performance work investigates the performing body and its relationship to the moving image as documentation. My current performance practice investigates the differences between a re-created memory and the original ephemeral experience. I was interested in the enigmatic quality of Josef’s performance work in the 90s and the boundaries of acceptance his work was challenging. The repercussions of an individual’s actions on society and community relates to my own struggle with censorship in my moving image work. The persistence and dedication of Singaporean performance artists to their practice, even after the ‘persecution’ by the state and others within the artistic community, inspires my current practice.


AAA: Why did you decide to study film? How did you negotiate the relationship between fine art and filmmaking?

LZ: I decided to specialise in the moving image in the second year of my undergraduate studies at Nanyang Technological University. During my foundation studies, I discovered the medium and realised its potential - it was a perfect amalgamation of various interests I had in music, movement, and the structuring of images over time. Shannon Castleman and Scott Hessels were my mentors they were constantly challenging my definition of art and its relationship to the moving image. I started out making semi-autobiographical experimental videos. Solos (2005) was my first mid length feature and it did relatively well in the international film festival circuit, even though it has never been publicly screened in Singapore. I moved on to make personal essay videos, mainly due to the genre’s flexibility and its need for minimal resources. It is working on these videos that made me critically aware of the moving image’s ability to reshape memories and reconstruct moments of trauma. It seemed like a natural shift to be transposing and expanding this ability from the personal to the national, and from filmmaking to performance and movement.


AAA: While Solos deals with a trangressive relationship between a man and a boy and your other shorter videos deal with your autobiography, how would you describe your recent video works, such as Chancre (2011) and Aemaer (2010)?

LZ: I moved on to making personal essay videos, mainly due to the genre’s flexibility and its need for minimal resources. Working on these videos made me critically aware of the moving image’s ability to reshape memories and reconstruct moments of trauma. In Autopsy (2008) I confronted the memory of coming out to my mom and in Chancre (2011) I dealt with my experience of contracting and getting treatment for syphilis. Chancre was bookended by documentation from my Chicago performance of Cane, the intention was to map my private moment of shame onto a larger context of national shame.

LZ: There is a deep temporal fracture that runs from 1993 to 2003. The question is, after a deliberate silencing of an art form for a decade, how should the performance art community proceed? Festivals like FOI (Future of Imagination) are ways we can negotiate and repair this fissure. I see the re-enactment of Josef Ng’s performance as another way of promoting discourse. In terms of the audience – Singaporeans still adopt a sensational and slightly bewildered attitude towards performance art, mainly because of how the mainstream media have misrepresented the form post Brother Cane. As a performer, I can sense a palpable difference in the energy of audiences in Chicago and Singapore. Chicagoans treat the performer with respect and understanding; Singaporeans with suspicion and curiosity.

With Brother Cane, the government has succeeded in what they wanted to achieve. By focusing all the pressure on a single point, the state managed to puncture the fabric of the artistic community and segregate us into smaller factions. To date, many factions still bear grudges or are tentative in collaborating with others. Many individuals had their lives and practices disrupted because of this incident, and to date, the state and its apparatuses have yet to offer reparation for the trauma they have caused. Ironically, the attempted erasure of performance art and the framing of it as a perceived threat only elevated the importance and power of the form, and gave artists currency and motivation to practice.

AAA: I saw the footage of the recent incarnation of Brother Cane at the Fringe festival on Sunday 19 February at the Substation in Singapore. There, you presented the piece differently from the Chicago version last year. Can you discuss your choices in presenting the piece to that audience?

LZ: I had to provide a lot more cultural context in my introduction for the Chicago performance. It was also a much more straightforward re-enactment of the original Brother Cane. I was away from Singapore the entire time I was pursuing my MFA and had to base my research on the limited resources I could locate in Chicago.

The performance at The Substation is comparatively more layered. I have been based in Singapore since August 2011 and was able to access research materials and individuals who were implicated in the incident. I spoke to Josef Ng several times and traveled up to Kuala Lumpur to meet with Ray Langenbach. As part of the performance, Ray was invited to recite his own affidavit and eyewitness account of the original performance.

The Substation performance was structured into an evening-length work, which illustrated the variety of accounts from/by various agencies – this included the media’s account, the legal account, my re-enacted account in Chicago etc. It was the differences in these accounts and the tension between them that I was interested in teasing out in this performance.

I performed a ‘live’ re-enactment of Brother Cane as one of these accounts, with a few small but significant alterations that were made to reflect the state of censorship in Singapore. I use Brother Cane as the constant in the experiment to reflect how much the state, audiences and arts community has or has not changed over these eighteen years.