AAA’s Chantal Wong spoke with artist Lee Kit over a casual dinner at the artist’s studio where they shared a bottle of wine. In a conversation that ranged from Lee's anxieties to his inspirations, he talked about his emotional attachment to objects, his intuitive style of working, and the change in focus that his work is beginning to take

Asia Art Archive (AAA): Can you describe your obsession with the personal hygiene products that play such a central role in your work?

Lee Kit (LK): First, my mother told me that as early as four years old, I rejected normal toys but would ask for cans of Nivea cream instead. So somehow I’ve always been drawn to them inexplicably.

Secondly, I really am obsessed with cleanliness. In the winter, I take two showers a day and in the summer, three to four. Showers are, of course, such a private activity. In a sense, I lay myself bare before these products multiple times every day. I feel very intimate with these products.

Another strange trait of mine is that I humanise these products. For instance, imagine you are thinking about and missing a certain Mary, then Mary’s name is obsessively repeated in your mind; when I am missing Mary, I begin to see Mary everywhere, for instance in the bottle of Johnson & Johnson’s bath wash. And the name "Mary" becomes replaced with "Johnson." I immediately associate the idea that consumes me with a product—I even think the Johnson & Johnson bottle resembles a person.

This may also have to do with my cultural context. Growing up in Hong Kong, one is colonised—not only the things and spaces around one are colonised, but also one’s brain and ideas. I saw these products all the time in the supermarket. 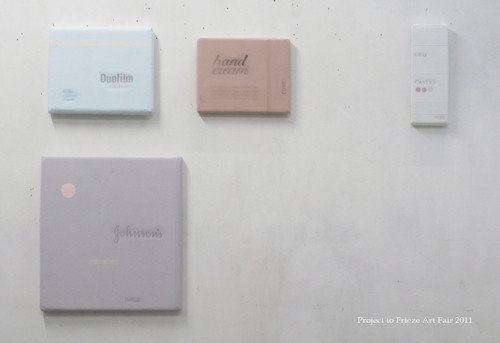 AAA: So you think these brands were part of a collective consciousness?

LK: Many people think it’s a simple brainwashing by consumerism, but that’s too narrow an understanding. Your relationship with the things around you, they become so intimate in a place like Hong Kong.


AAA: I know the production of your work often begins and ends with specific events or experiences in your life. In a sense they are autobiographical. Can you describe this process?

LK: Behind every object I paint, every cloth, there is a person. So during the process of production I go through a long period of attachment and finally a cutting-off of the feelings or the feelings for the person.


AAA: Is it cathartic?

LK: Not really. When I want to empty out my emotions, I prefer to get drunk. For instance, I’m not productive right after a break up, when I’m at my lowest. I am creative and most inspired when I’m dealing with what the remains of the emotions. It’s neither happiness nor sadness but like that intense empty feeling one has very late at night, before going to bed. All my work is created on these "remnants." That’s also why I need to work in this studio space; it is filled with lingering subtle emotions. 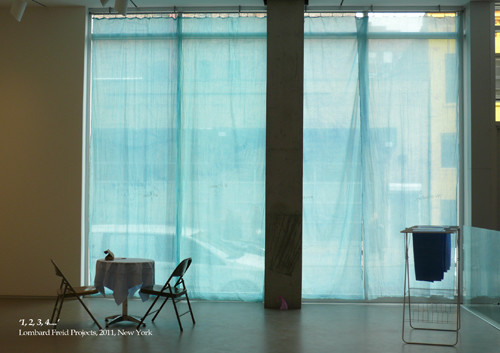 AAA: What about your picnics? How do they relate to these experiences?

LK: That was a misconception. Those were not actually part of the artwork. They were just picnics. Finally, I stopped organising picnics because I became aware that they were becoming part of the art. I generally don’t feel comfortable in socially demanding situations.

At the same, I don’t like parties, but I really like the feeling after parties: that feeling of complete exhaustion. Then I am very productive.


AAA: How do you know when the work is complete?

LK: It’s actually a very unprofessional and simplistic criterion. I see it and I smile.

LK: Yes, if it’s a work that needs to be hung, then I hang it and I smile and I know it’s done. Otherwise, I take it down and it continues to be made.


AAA: Your blog seems like an extension of your work, but more open-ended and spontaneous. Do you want to discuss it in relation to your work?

LK: My blog is like my diary or notebook. It has practical purpose: when I recall an image from a film or a photograph I’ve seen or taken, it’s easier to post it on a blog than to jot it down in a paper diary—actually, the blog first started when I was in New Zealand and I was using it to update my girlfriend in Hong Kong about the things I was seeing and thinking—but it evolved into a notebook for myself.

Most of the images are taken during my travels, mostly in New York, London, or Tokyo. When I take a photograph, I don’t necessarily plan on posting it on my blog, nor do I associate it with the text that might later appear with it. It’s upon reviewing them later that associations are made and they are juxtaposed with quotes or lyrics from songs. There is no clear logic—like most of my work. There is a gap between that moment I experience, taking the image and then seeing the image, the existence of the image with the text, and what is being communicated, but somehow I think it’s still understood.

A lot of my work and ideas stem from there.


AAA: Where do the lyrics come from?

LK: Ever since I was really young, I’ve had a kind of "handicap": I have to listen to music when I’m on the underground—it used to be on a walkman, then a discman, now on my iTouch. When I wasn’t listening to music, I’d get an anxiety attack, my hands would start to shake and I’d break into a cold sweat. If the batteries died, I’d have to dash out and buy new ones.

So, since then I’ve always listened to music obsessively. Whenever I’m alone, I have music playing.

But I seldom search for or google lyrics. When I’m falling asleep or taking a shower (the only times I’m not playing music) the words that are so familiar to me resurface in my mind. And those are the lines that appear.


AAA: Then they become associated with a moment?

LK: That moment, my state of mind; but I don’t want the words to concern only myself. I don’t always want to take my personal context as the starting point. So I try to place it somewhere else. For example, Skeeter Davis’s song "The End of the World" goes: "I wake up in the morning and I wonder why everything is the same as it was." The meaning is obvious in the context of the love song; but to a labourer the line could mean something completely different, perhaps that every morning one wakes up to the same story, and life’s banality never changes, and things don’t get easier. So that’s how I try to understand the lyrics, by associating them with different situations.


AAA: Do you read novels? Because your work makes me think of Proust and his madeleine cakes.

LK: I tried! I bought all the volumes but it’s been three years and I’m still on the first ten pages. It’s so boring, like staring at myself in the mirror. I can’t read or watch novels or films that seem to amplify myself.


AAA: Let’s talk about Johnny from How to set up an apartment for Johnny?, your presentation Art Basel’s Art Statements with Osage. Who is Johnny?

LK: Johnny is a name I hear really often especially in some of my favourite English songs such as New Order’s "1963" and Spiritualized’s "Come Together." But even though it is such a common English name, I’ve never known a single Johnny in my life. And maybe that’s why I’ve become obsessed with the name. It’s coincidental, and inexplicable, really.

Coincidences are very significant to me. The name becomes symbolic to me through coincidence and repetition. Parallel to the way I turn people into objects, I also turn objects, or ideas, into people—in this instance, Johnny. It’s a projection of my thoughts and feelings onto a thing or name. This bottle turns into Mary, because I’m repeating the name and staring at this bottle, or many bottles. Mary, mind you can be a person or just a feeling, but it can consume and become every thing around me.

LK: I went to one of the best schools and did really well in my exams. I was terrible in math but excelled in languages, including English. Obviously now it has deteriorated. My written English was okay. I used to be able to write 5,000-word essays in one night in English and I’d get an A. I used to even think in English; my diaries up until around two years ago were all written in English.

But then I intentionally forgot the language. It was not about any project. I just thought that I could forget it.


AAA: What is it about the English language? And why did you force yourself to forget it?

LK: I tried to create a distance with the language. English is not my mother tongue of course, so I could still forget it or at least worsen my knowledge of it. If it’s your mother tongue the language can become very straight-forward and obvious. There is a certain ambiguity in a foreign language that I find interesting. I don’t understand all the innuendos and associations suggested by a word in English, and this creates gaps in my employment of it.


AAA: You have an upcoming show in Vancouver at Western Front Gallery entitled Henry: Have you ever been this low? in which you create a space for Henry, alluding to a certain politician in Hong Kong. Can you describe this work?

LK: The installation presents Henry’s home in Vancouver after he pulls out from politics in Hong Kong. The space is guilt-ridden. I think that guilt, as an emotion, has changed with time. The cause of guilt used to be inspired by specific actions, like cheating on your wife, but today’s guilt is ever-present. One might not even have committed one act that they associate the feeling with, but the feeling lingers nonetheless.

Henry, in Hong Kong, is widely criticised. People don’t see him as human, but as a public figure, a signifier. So I want to create a space which rather than victimising him, makes him human—a sad and lonely human.

I don’t want to make use of a situation (exhibition) to criticise something directly. And rather than promoting myself in Vancouver, I am promoting him as a human being who has inflicted guilt and regret upon himself.


AAA: This is quite a big shift in your work, from it being self-reflexive and autobiographical, in a sense, to focusing on a public figure—a specific person.

LK: There is still a level of self-projection in the work, of course. I think people can’t help but see themselves in other people. But it is the first time that I am consciously moving away from this "self-reflexivity." I think I have grown mature enough so that, without spelling it out, I can communicate a lot.