AAA spoke to artist Poklong Anading, winner of the 2008 Ateneo Art Awards in the Philippines, about the art scene and creative community in Manila, and his experiences at various alternative art spaces in the region. 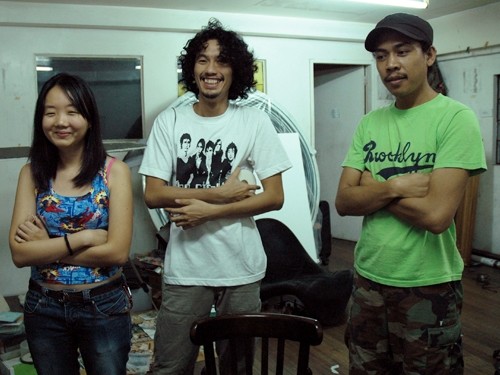 AAA: Your work has been described as distinctly urban. Do you agree with this?

Poklong Anading (PA): I can’t say that my works are distinctly urban. It just happens that I live in an urban setting, and I think it’s very natural to adapt to and get inspiration from what you see and hear around you. I spend most of my time far from home and being on the street is like being in another artist’s studio where I accidentally find ideas and resources for my work.


AAA: Your works range from photography, painting, video, sculpture to installation. Do you have any preferences among these for your practice and how do you conceptualize your work with different media?

PA: I don’t have a preferred medium. Most of the time it is dependent on a particular idea that interests me. I’m interested in the self-reflexivity of the medium and the process – when it raises questions that have no desire to be solved, instead directing you to another problem. In many cases, the present circumstances, or a given moment, dictate the medium for the work. AAA:  Last year you organized an exhibition at the National Art Gallery called ‘Room 307’ with over fifty local artists. What was your intention for this project and do you think it was successful?

PA: When I first saw the gallery I didn’t think that it would be a good space for an exhibition. Instead I saw it as a working space, a workshop area for artists to create huge projects. It was like an artist’s residency in the former Big Sky Mind in Cubao, which closed down four years ago. It’s interesting to think that the so-called ‘National’ Art Gallery has the feel of an alternative space. It has poor lighting and ventilation and it needs a lot of repair and restoration. Even so, it represents our national culture and it has the potential to reach a wide audience, to educate and show what is happening in different art communities throughout the country. For me it’s a good opportunity to exhibit works by artists who we know are very active and are making significant works. It is still questionable whether one can claim the show to be a success – it’s just the irony of the whole space. But presenting this kind of project raises the awareness of the younger generation of artists about the current situation of our museums. The project could be seen as a case study for improving the museum and to maximize the potential of the space before it is totally neglected by the government.


AAA: You also organized a video exhibition at MO_ called ‘Strain Extension’. Again, what did you hope to achieve with this exhibition and were your expectations met?

PA: Back in 2001 we presented a video event at Big Sky Mind in Dona Juana, with more than twenty participating artists ranging from filmmakers to painters. It was like a video festival but we worked in a very small space, and we brought our own home TVs to the gallery. ‘Strain Extension’ in some way draws inspiration from that event. Eleven artists took part - Bea Camacho, Gary Ross Pastrana, Jevijoe Vitug, Gina Osterloh, Alvin Zafra, Kaloy Olavides, Martha Atienza, MM Yu, Ringo Bunoan, Cocoy Lumbao and myself. Using video as a tool for our creative process, we all tested the medium and the capacity of our own and others’ bodies, preserving our own image on tape, stretching time and space. It’s for old time’s sake, looking back to the past videos with the new works done from the past few years. [It’s for the sake of history – looking back to the past through newer works created in recent years.


AAA: Do you see any conflict between organizing exhibitions with other artists and your own work? Do you think it is easier for artists to work with fellow artist-curators rather than more academic curators? How would you compare the two?

PA: Yes, there is a conflict if you curate your own work in an exhibition; your focus is divided. You try to create a balance but that extracts from your attention to your own work. But artists have become used to this here because otherwise nothing would happen to us. Most of the time it’s a collaborative effort, similar to that at the National Art Gallery and Mo_ – those shows would not have happened without the help of the artists themselves. Each artist would have their own area to look after, for example someone would help write the press releases and invites, someone else would make lists and gather materials needed for the installation, and another would follow up schedules and deadlines for the works. The artists know their own work very well. As artist-curator I would discuss the ideas for the works with the artists and assign areas for them to work on. Asking fellow artists for their opinions and suggestions is extremely helpful in identifying which artists’ works go well beside each other. Working with artist-curators is more collaborative; you can take advantage of opportunities as the exhibition develops. With academic curators it’s more like following a curatorial framework, the process is orchestrated and based on a blueprint. Everything depends on the curators’ decision and the artist’s job is to concentrate on their own work, according to the plan. It is also good to practice this approach here, locally.


AAA: It has been said that in the Philippines there is a clear divide between social realism (e.g. works by the national artists) and conceptual art (such as works by Roberto Chabet). Do you think this is true? Is there a possibility of bridging this divide? Do you consider your work to be either of the two or somewhere in between?

PA: I think this divide occurs everywhere, where the politics of art can divide the whole art community. It’s not only here in Manila. Social realism and conceptual art can both be a kind of commentary on art and society; it only differs in form. It’s hard to categorize myself – there are a lot of possibilities that can be explored to test the limitations of art and find its meaning in our time.


AAA: You were a resident artist of Big Sky Mind, an artist-run-space in Manila (for how long?), and recently of the Common Room in Bandung. How would you describe your experience there? Do you think residencies in general are good for artists?

PA: I was a resident at Big Sky Mind for a year from 2003-2004, and I was at the Common Room in Bandung for just two weeks last year. BSM would be as old as Common Room if only it had continued. They almost started in the same year, 2001, and have been formally established since 2003. My experience in Bandung was similar to that of BSM when it started in Dona Juana with young people from various disciplines – artists, musicians, painters, filmmakers, writers and students from different universities – all hanging out. It reminded me of the old days when everybody was really energetic and active. Even if there was no audience, they would still do what they wanted to, such as live experimental sound recordings, video screenings, art talks and other exhibitions. Bandung has that same energy and there is no discrimination amongst the different media. You can see death metal with electronica, experimental and traditional music merging under one roof. They also hold workshops and group discussions ranging from the history of metal music to human rights issues, or DIY gadgets for sound electronic instruments. The camaraderie is quite strong which is rarely seen in Manila since BSM and Future Prospects both closed down.

When I was in Bandung, I was involved in a test sound project in the Common Room, in collaboration with musicians working with electronica. I bought five Perahu in different colours (red, yellow, blue, black and white). A Perahu is a toy boat with a gunner made out of tin and it produces a crackling sound when it’s heated. You need to put water on the muffler and that propells the boat. You heat it by burning a flame from a wick that has been dipped in cooking oil. I borrowed a big cooking pan, filled it with water and let the boat move around the water while amplifying the sound that was created from the water. In turn this was hooked up to the computer manipulated by the electronica artists.


AAA: One of the aspects of being part of a residency is working with a particular group or community. Can you describe the community you are part of in Manila, and does that group inform your work in any way?

PA: At the moment I am not involved in any artists’ group or community. Artists here meet up if there’s an exhibition opening. It seems as if these openings have become the obligatory Sunday mass. I am still in the same compound where Big Sky Mind used to be but it is only the remnants of what was once a vibrant community. In my own work I feel that I am still searching for something – maybe my own comfort zone. After everything I’ve been through in the past few years, I’m now at a point where I am still grasping, still learning and balancing myself between those things that need to be done and those that remain to be my ideals.


AAA: Do you see any similarities between Indonesia and the Philippines? After your residency in Bandung, you are going to represent the Philippines in the Jakarta Biennale this February. Are you conscious about issues of identity when it comes to projects such as this?

PA: Yes, Indonesia and the Philippines have the same flavour. In terms of taste we both crave for the extremes, from sweet and sour, to hot and bitter. It’s very peculiar. We have a distinctive, intense way of being. Even though we have been exposed to many external influences, we still hold a very particular local identity. I think it’s a form of resistance to a kind of hegemony. When it comes to international events such as the Jakarta Biennale, I am not so conscious about local identity, although at first I couldn’t help but think about the issue of national representation. Now I just think about what work I can exhibit, what is most appropriate to show, and what interests me at the moment.