Asia Art Archive (AAA) presents Out of Turn, an exhibition that looks at the practice of performance art in Asia, underscores the evolution of performance over the decades. In addition to materials drawn from the research collections of AAA, the project also presents a series of live acts by a diverse group of artists. Out of Turn is a part of Serendipity Arts Festival 2018, a multi-disciplinary arts event set over 15–22 Dec in Goa, India. In its third edition, the festival takes place across 10 venues with over 80 exhibitions, performances, and immersive arts experiences.

Artists have been making performance-based work in South Asia since the 1970s, and earlier in other parts of the continent. Out of Turn, an exhibition curated by Meenakshi Thirukode in collaboration with Asia Art Archive, presents some moments from that history, pairing materials drawn from Asia Art Archive’s research collections with performances commissioned from artists Maya Krishna Rao, Priyanthi Anusha, River Lin, Sajan Mani, siren eun young jung, and Mutant Salon (Young Joon Kwak and Marvin Astorga). On display at the exhibition are materials from Betsy Damon: Keepers of the Water, Kwok Mangho Frog King, Ray Langenbach Archive of Performance Art, Lee Wen, and Zhang Peili.

In juxtaposing live art with various historical documents, including photographs, texts, and audiovisual recordings, the exhibition touches on the paradoxical relationship between performance and the archive. Whereas performance is generally considered an art form comprising gestures and actions, to be experienced live at a particular place and time, in reality, most people encounter it in a mediated fashion, through recordings and recollections, especially as the performances themselves frequently leave no trace. In other words, the ephemerality of its practice makes it all the more reliant on the archive for understanding its history. In exploring a performance’s multiple existences and its connection to the archive and the document—whether in the form of written description, photograph, or audio-visual recording—the project expands our understanding of this most elusive of genres.

Anusha will be performing two pieces that navigate the subjectivity of motherhood:

Using mother’s milk and charcoal, Anusha creates a concoction of two very distinct elements, each with its own set of material histories – the one nourishes, while the other is used as a talisman of protection. The artist soaks her hair in this and repeatedly lashes it onto a canvas, creating a trance-like gestural painting, subverting dominant art historical narratives around figures like Jackson Pollock and Yves Klein while situating it within a very personal journey for her as a new mother.

In this performance, Anusha will enter the crowd, wearing a white sari, with a few bindi bottles and a small mirror. The artist will paint a bindi on her forehead, approach an audience member, and transfer a copy of the still wet bindi to that person’s forehead. The gesture is some kind of intimacy. The artist will then proceed to put bindi with the same gesture on her surroundings.

Anomalous Fantasy_India Version is a performance piece which re-imagines the Korean theatrical tradition of Yeoseong Gukgeuk via the perspective of contemporary art. Yeoseong Gukgeuk started at the end of the 1940s, and declined after peaking in popularity during the 1950s and 1960s. It is a genre in which singing and dancing are combined. It contains remaking stories of popular myths or novels based on Korean traditional music, Pansori. Yeoseong Gukgeuk has a significantly subversive style that only women players can perform all of the characters. Even though Yeoseong Gukgeuk has a short history and little historical documentation, it has achieved a new modern formation of theatre, as much as radical sexual politics, during the Korean modernisation. This piece by jung creates a technology of imagination closer to Yeoseong Gukgeuk, an image of absence. It also argues for the inherent political possibilities for minorities of Yeoseong Gukgeuk by critically intervening in the certain hegemony of so-called ‘written history’.

Sleeping in between Tehching Hsieh and On Kawara

Hsieh’s work One Year Performance 1980-1981 (Time clock piece) and Kawara’s I Got Up (1968-1979) and Today Series (1966-2013) are the exemplary testaments of dealing and working with time. They both have, however in different ways, conceptually and physically regarded and stretched fragments of life as a platform to stage the relationship between time and labour of daily life.

Based on the research of these two artists, the work Sleeping in between Tehching Hsieh and On Kawara by River Lin, will stage a live installation to perform and document time, with both the presence and absence of the artist’s body. During the exhibition, Lin will perform with the time signals of alarm clocks. A life cycle of sleeping, waking, standing, walking, and lying is represented as the primal labour of one’s daily life, as well as symbolising the circulation of life and death. 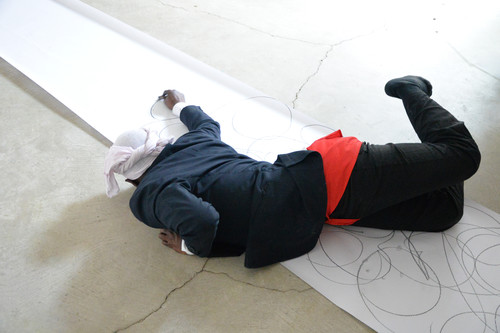 Unlearning Lessons from my Father

The performance is a poetic response to the questions of archiving. From within a political and cultural temporality that does not ‘archive’ to record, what would a ‘looking back at’ entail? Mani looks to his own personal biography and its connection to the history of colonisation; particularly at the forced migration of trees and plants which include cashew, pineapple, rubber and tapioca. Mani’s father and brother smuggled cashews to the nearest state border in order to make money to send the children to school while his father and mother were rubber tappers working in various rubber plantations in Kerala. Mani therefore tries to weave a narrative that connects colonial and material histories of these fruits and plants to the personal histories connected to indigenous lands, bodies and knowledge. In this way the performance is an attempt to create a language around a very particular gesture around archiving. 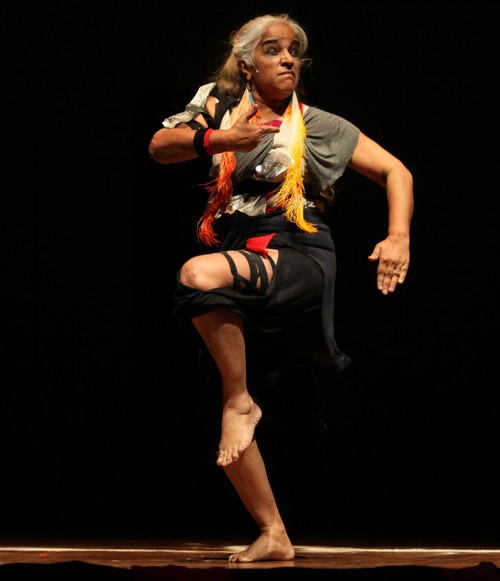 Loose Woman is a solo cabaret that harnesses the histrionics of Kathakali, soundscapes from live musicians and satirical political commentary on a single runway. In Loose Woman a.k.a. A Deep Fried Jam, Maya Rao reflects on current affairs and history particularly around the archetype of the ‘loose’ woman, using theatre, dance, projection and music. Expect vignettes laced with irony and humour serving up some pertinent and thought-provoking questions. Xina Xurner Xina Xurner is an experimental music/performance collaboration between Mutant Salon founders Marvin Astorga and Young Joon Kwak. Xina Xurner’s performances combine DIY and power electronics, mutated vocals, and bad drag to manifest the rage, pain, struggle, laughter, and joy of embracing the “other” identity that you had not chosen, but was forced on you, as queer, trans, femme, POC.