Learning What Can’t Be Taught reflects on changes in art education in China from the 1950s to the 2000s. It focuses on six artists from three generations who were each other’s teachers and students at the Zhejiang Academy of Fine Arts in Hangzhou. The school, now called China Academy of Art, was established in 1928 as the first art academy in the country. The exhibition explores how Chinese artists across generations have learnt in and outside of classrooms, and proposes lines of continuity among these artists. We ask: what guidance did they receive from their teachers, and how did this, in turn, influence the way they taught art? On display are rarely seen artworks, archival materials, and video interviews with Zheng Shengtian, Jin Yide, Zhang Peili, Geng Jianyi, Lu Yang, and Jiang Zhuyun. 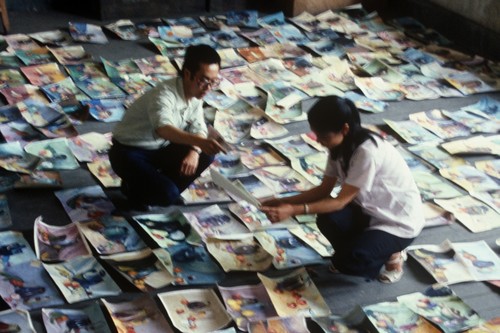 In the 2000s, China’s economy grew significantly with the impact of globalisation, and university education expanded. Founded in 2003 at the China Academy of Art, the New Media Art Department became a pioneer in formalising contemporary art education. Zhang Peili served as the head of department, and Geng Jianyi was among the outstanding professors. At the end of the seven years of operation, the department had more than 300 graduates—including Lu Yang and Jiang Zhuyun, who are two of the most prominent artists of their generation.