This archive comprises materials about the life, art practice, and pedagogical work of the late artist and educator Huang Xiaopeng (1960–2020) over the period 1974 to 2020. The archive offers insights into topics including, but not limited to, art education in China, diasporic Chinese artists in the UK, and the contemporary art scene in the Pearl River Delta region.

Huang Xiaopeng was born on 16 October 1960, in Taiyuan, Shanxi Province. He grew up in the Chiuchow-Shantou region. In 1979, he moved to Guangzhou to study in the Oil Painting Department of Guangzhou Academy of Fine Arts (GAFA). Among a class of twelve students from Guangdong, Guangxi, Hunan, Hubei, and Henan, Huang was closest to Duan Zhengqu and Xu Tan. Their teachers included Yun Qichang, Xu Jianbai, and Yang Yao, among others.

After graduating in 1983, Huang worked at Zhujiang Film Studio for six years. He was responsible for art design for films, TV dramas, and advertisements produced by the studio. In 1986, Huang participated in Southern Artists Salon and its “First Experimental Show.” Southern Artists Salon was a major art collective in Guangzhou in the mid-1980s whose core members include Wang Du, Chen Shaoxiong, and Lin Yilin.

In 1989, Huang went to London to pursue further study. In 1990, he joined the master’s programme in painting at the Slade School of Fine Art. In interviews, Huang mentioned his interactions with Tess Jaray, Head of the Painting Department, and Bruce McLean, who gave Huang a photograph of Beuys that he always kept. British artist Tacita Dean was in the same class with Huang. Hong Kong artist Lukas Tam Wai Ping, who was in the following year’s class, became his lifelong friend.

After graduating from the Slade in 1992, Huang stayed in London, earning his livelihood as a portrait painter. He maintained close relationships with other Chinese artists living in the UK, especially Cai Yuan and Sun Haili. He participated in two major exhibitions of British Chinese artists during the 1990s: Journeys West, a touring show in 1993 to 1995, and Far from the Shore, which opened in Pitzhanger Manor & Gallery in 1997.

In 2003, with a growing interest in the new developments in art and culture in China, Huang decided to move back to Guangzhou. He reconnected with his schoolmates from the early 1980s, especially Xu Tan and Chen Tong, and quickly became a core figure in the contemporary art community in Guangzhou. In 2003, the three of them became active participants of Park 19, an independent arts organisation founded in Guangzhou.

Huang was invited to teach at the Oil Painting Department of GAFA in 2003. Instead of following the existing syllabus, Huang advocated for a new course on contemporary art experiments. He became the Head of the 5th Studio of the Oil Painting Department, where students were allowed and encouraged to use all kinds of media and methods. Huang cancelled most of the compulsory classes such as life drawing and drawing trips to the countryside, and introduced critique sessions, workshops, and guest lectures by international artists. Huang’s teaching influenced a major group of Guangdong artists born in the 1980s, such as Hu Xiangqian, Yang Meiyan, Feng Hanting, Song Ta, and Jiū Society. The 5th Studio became one of the most well-known experimental art education entities in China.

Although Huang’s teaching was highly acclaimed in the contemporary art field, he was dismissed in 2012 as the Academy underwent a change in leadership and a departmental restructuring. After he left GAFA, Huang continued to explore new possibilities of contemporary art education. With support from the Guangdong Times Museum, he and Xu Tan co-founded HB Station in 2012, an independent platform that promotes self-education and self-organisation for young artists in Guangzhou. HB Station is currently one of the most notable independent arts organisations in China.

Between 2003 and 2019, Huang participated in over 100 exhibitions, screenings, and residency projects in China and abroad. From 2019 onwards, Huang began splitting his time between Berlin and Guangzhou. He initiated the exhibition Fear, No Fear, which opened in Times Art Center Berlin between 7 April and 17 July in 2021.

On 7 October 2020, Huang died from a heart attack in his apartment in Berlin, a few days before he turned sixty. A tribute exhibition to him entitled Don’t Kill Me I’m in Love, produced by his students, opened at the Times Museum, Guangzhou, on 25 September 2021.

Open to researchers. Correspondence are all on restricted access; while a small number of onsite-accessible material are available for consultation at AAA Library in Hong Kong, as well as our reading rooms in New York and New Delhi. Please make appointment at library@aaa.org.hk

Subject to all copyright laws. Permission to publish materials must be obtained from copyright owners. Please contact library@aaa.org.hk for further enquiries

The project is developed by AAA researcher Anthony Yung. The physical materials were digitized by Duan Liangxue. The annotation was supported by Fang Xiaoya.

The 5th Studio Department of Sculpture, China Academy of Art, 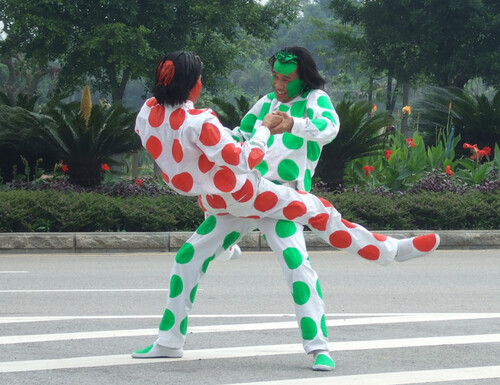