The archive of Mrinalini Mukherjee (1949–2015) documents the career of one of the most prominent modernist sculptors from India, who, beginning in the 1970s, challenged existing norms of sculptural practice, which was a predominantly male domain. Comprising over 1,873 records, the highlights include photo-documentation of art historical sites and traditional art forms; installation instructions and detailed documentation of her monumental sculptural works; papers such as correspondences, manuscripts, and photo-documentation relating to the art community in India; and a small but significant set of documents on her mother, sculptor Leela Mukherjee. The collection brings out interconnected art histories that ran through her life and practice—her personal and professional relationships with artists, writers, and curators; and her engagement with art institutions in various capacities.

Mrinalini Mukherjee was born to artist parents—Benode Behari Mukherjee, a renowned artist and teacher at Santiniketan, and Leela Mukherjee, an eminent sculptor and art teacher. Mukherjee completed her training in painting and mural design at the Faculty of Fine Arts in Baroda (1965–1972). During her student years, Mukherjee experimented with natural fibres like jute and hemp for the first time, as part of making objects for the Fine Arts Fair. Soon after completing her studies, Mukherjee moved to Delhi’s Nizamuddin area in the early 1970s, which was a hub for designers and architects, facilitating her large-scale public projects and commissions in fibre works. In 1978, Mukherjee received a British Council Scholarship to study sculpture at West Surrey College of Art and Design in the UK. After her return, she received a fellowship in 1981 to work at Garhi Studios, set up by the Lalit Kala Akademi in Delhi. From the early days of her practice, Mukherjee’s trajectory intersected with key artistic figures in India, including her teachers and peers at Baroda and Delhi, and artists such as K. G. Subramanyan, Gulammohammed Sheikh, Nilima Sheikh, Nagji Patel, Bhupen Khakhar, J. Swaminathan, and critic Geeta Kapur among others.

In the 1980s and 1990s, Mukherjee travelled extensively across India, Europe, and Southeast Asia, with her then-architect-husband Ranjit Singh, documenting several sites of art historical and archaeological importance, including temple architecture, sculpture, and traditional art forms. In this period, she took part in several group exhibitions in India and abroad, including the Paris Biennale (1980); Sydney Biennale (1986); Festival of India in Japan (1988); Mrinalini Mukherjee Sculpture at the Museum of Modern Art, Oxford (1994); and Asia Pacific Triennial (1996). Mukherjee also served on the Advisory Board of Roopankar Museum at Bharat Bhavan, Bhopal (1986–90), and the National Gallery of Modern Art, New Delhi (1994). In 1995, Mukherjee began experimenting with ceramics, and further developed in terms of scale and technique, at the European Ceramic Work Centre (EKWC) in Hertogenbosch, Netherlands (1996 and 2000). In the early 2000s, Mukherjee began working in bronze using lost-wax casting and held several exhibitions of her sculptures. In 2015, her retrospective exhibition Transfigurations opened at the National Gallery of Modern Art, New Delhi, posthumously. Phenomenal Nature: Mrinalini Mukherjee, the first retrospective of Mukherjee’s works in the USA was organised in 2019 by the Metropolitan Museum of Art, New York, with an accompanying publication.

The Mrinalini Mukherjee Archive is organised into twelve series consisting of a wide range of materials relating to her practice and the art communities she was a part of. Highlights from the collection include Art Process Documentation (Series 3), which features photographs of installation experiments and unique instructions for the installation of Mukherjee’s fibre sculptures; and Photo Documentation of Art Historical and Cultural Sites (Series 4).

Materials are mostly in Bengali, English, Hindi, Marathi, and Sindhi. A small fraction of materials are in Swedish and French.

Open for research. Onsite-only and restricted materials—including but not limited to correspondence, newspaper clippings, and unpublished writings—are available for consultation at AAA in Hong Kong, New Delhi, and New York. Please make an appointment at library@aaa.org.hk at least one week in advance.

Subject to all copyright laws. Permission to publish materials must be obtained from copyright owners. Please contact library@aaa.org.hk for further enquiries. 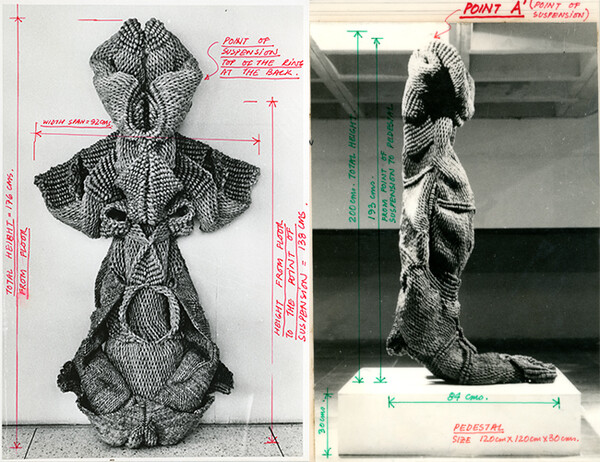 “…and it is something which grows in all directions”
Programmes

“…and it is something which grows in all directions” The Language of Birds: A Reading Session on Artistic Research with Raqs Media Collective
Programmes

The Language of Birds: A Reading Session on Artistic Research with Raqs Media Collective