A Work Presented at Thirteen Artists 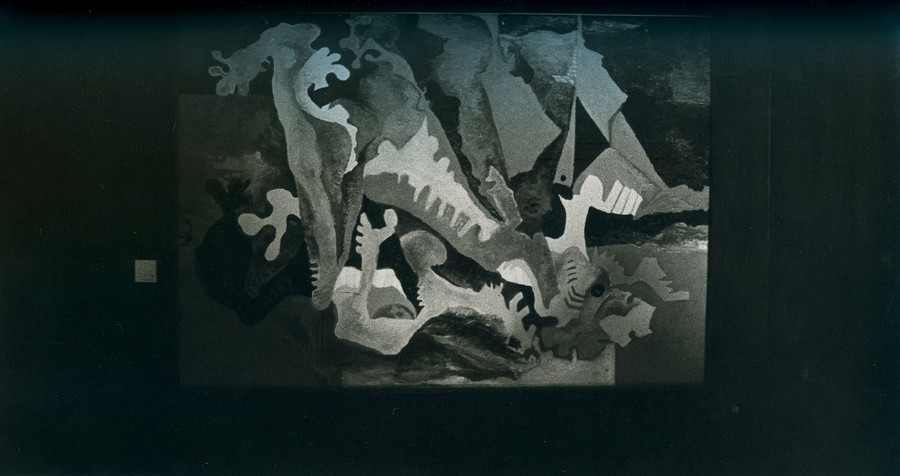 Photograph of one of the works in the first 'Thirteen Artists' exhibition curated by Roberto Chabet at the Cultural Center of the Philippines (CCP) Main Gallery from 15 June to 31 July 1970.

Chabet wrote, 'The artists represented in this exhibition are thirteen of the country's most active, most aggressively ambitious talents. They belong to a new generation of painters, sculptors and printmakers that promises to dominate Philippine art of the seventies. This is a young group whose average age is 28. Not surprisingly their works show recentness, a turning away from past, familiar modes of art-making, a movement towards possibilities and discoveries. It is recentness that is made credible by a keen awareness of artistic problems, an articulate command of means to pursue innovative solutions, and a confident commitment to ideas. It is recentness that hopes to endure.
This is a group of young artists who have gained considerable maturity and recognition. They have all participated in many important exhibitions here and abroad, and, except for one, have had a number of one-man exhibitions. Each of these artists has shown a remarkable measure of stylistic individuality and their influence is being felt in the works of other young artists. In this exhibition we have in evidence a certain expansiveness of scale and largeness of concept that are intimations of master-works-intimations in which the promise each artist has shown in recent years is finding fulfillment.
In the individual successes of these artists, fulfillment, too, of the modernist tradition in the Philippine art is being realized. The implication of the tradition of change, the ever turning revolution of modernism has been understood by these young artists. Through their persistence in meeting the challenges of the new, they have accelerated the motion initiated by our earlier generation of modernists. The challenge has been well-taken, and even within this group, divergent art-styles are clarified by the imperative revisions that constantly restructure, restrengthen and renew artmaking and art-thinking. In this exhibition, the confrontation of preferences, the multiformity of attitudes and approaches, and the sense of competitiveness that sustains excellence reveal a restlessness against norms, a resistance to complacency and the easy solution, a vaunting taste for risks, a will for singular disclosures. Those looking for pat pictorial cohesiveness will not find it here. Here is a choice. Here is liberation from the leaving constrictions of single-mindedness. Here is a dissention of styles, the varieties of experience that lend viability to Philippine art.'

A Work Presented at Thirteen Artists