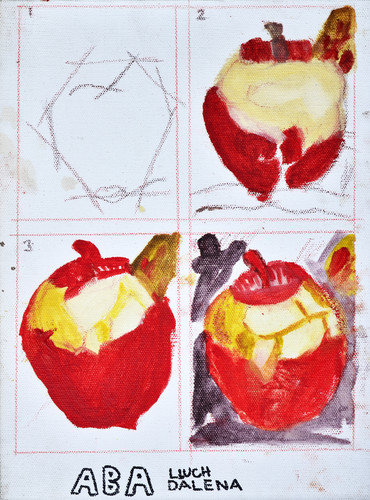 Dialogue and complicity are some of the keywords that are part of Chabet’s expanded art practice. The Apple Painting Lesson is an early collaborative work in which over forty artists took part by creating their own apple painting following an elementary four-step guide taken from an instructional book. While some were faithful renditions of the sample painting, others deliberately deviated from the set procedures, emphasising the individuality of each piece. The artists who participated in the exercise included Antonio Austria, Danilo Dalena, Fernando Modesto, Lee Aguinaldo, Romulo Olazo, Mars Galang, Napoleon Abueva, Malang, as well as students of Chabet in the 1970s and early 80s such as Yolanda Laudico, Ileana Lee, Nilo Ilarde, Soler and Steve Santos, Agnes Arellano, Gerardo Tan, Raul Rodriguez,Romeo Lee, and Marcel Antonio.

The work was first shown in Chabet's exhibition, 'Apple Painting Lesson and Other Works,' at Luz Gallery in 1982. It was also included in the exhibition, 'To Be Continued,' the final exhibition in the 'Chabet: 50 Years' series of exhibitions at the Cultural Center of the Philippines from 19 January - 31 March 2012.