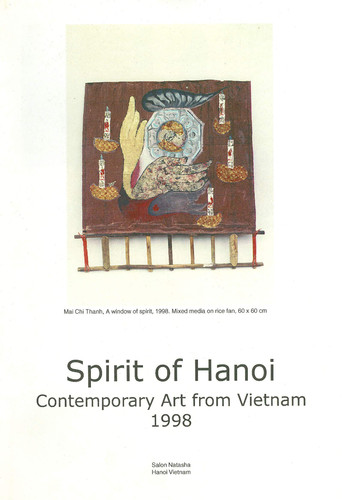 Catalogue prepared by Salon Natasha posterior to the exhibition 'Hanoin Henki'. It served as a report of the project development in Finland.

'Hanoin Henki' (or 'Spirit of Hanoi') was a visual art project conceptualised and proposed by Pauli Mustonen (Cultural Attaché of the Finnish Embassy of Finland, Vietnam), Maritta Nurmi (Finnish artist resided in Hanoi), and Eric Leroux (French artist and frequent collaborator with Salon Natasha), on the occasion of the Asian Art and Culture Festival in Finland. The curatorial team intended to present to the audience an ecology of the Vietnamese art scene, namely the interconnections between art creation, daily life, artist/public interaction and collaboration; as well as the co-existence and exchanges between traditions and modernity in various art forms. Salon Natasha — a multi-functional artist-run space — was hence chosen to be represented and reconstructed as an installation in the Festival.
The project was presented in two exhibitions held in Helsinki and Oulu respectively.