This catalogue was published on the occasion of the 4th International Istanbul Biennial 1995 held from November to December, which expressed recent tendencies in the Turkish and international art scene by presenting both established and emerging artists. It aimed to initiate an international dialogue between the artists, from the so-called East, West, North and South, whose perspectives go beyond the center-periphery model and national discourse. The leitmotif of the exhibition, 'Orient/ation', proposes multi-layered meanings according to the place, language and identity of the viewer. Direction is implied in the origin of the word 'orientation' in Turkish, which suggests that the only way of relating to a place is by orienting oneself.

Images of works accompanied by descriptions. Biographies and list of exhibited works provided.

Note: Only participating artists of Asian heritage (or those born in Asia) are listed below.
Alternative title

The Vision of Art in a Paradoxical World

'Is it possible to create works that aren't art?'

The Purity of St. Irene

Sunken Palace
To Collect or To Be Collected

Art and the Discourse of Nations: Reflections on Biennial of Nations

There is Another Third World (Against Primitivism) 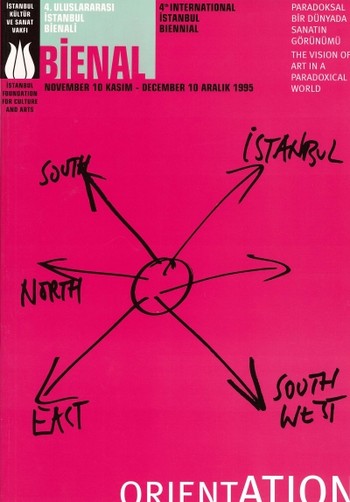