The Contemporary Art Exhibition of the Busan Biennale 2008 is based upon the concept of an open exhibition, which broadly addresses the dynamic scenes of international art. It also attempts to describe the self-reflective aspect of inquiring about philosophical perspectives on the overall contemporary culture, criticism on the aesthetic direction of the global contemporary art and structural relations between large-scale
exhibitions, like biennales, and art.

EXPENDITURE - also meaning consumption, discharge and emission - a concept which encompasses the entire exhibitions of the Busan Biennale 2008 , is a major concept of the philosopher Georges Bataille. It is not simply related to consumption culture we ordinarily associate it with, but it is a philosophical concept used to understand the structure of human society and culture. All social, cultural and psychological order, values, and symbols, which dominate our life, are always produced excessively. Expenditure means aimlessly and unproductively "expending" and thus disintegrating excessive production. Only when the production-oriented system, which constantly overproduces, and its by-products strike a balance with the collapse of order and the meaningless consumption of energy called expenditure can we understand the overall picture of human society, culture and art.

In this regard, the Busan Biennale 2008 raises the question that the latest contemporary art scene and international biennales are excessively concentrated on production in a socio-political sense, "the production of others" through the exploration of new racial and regional art, and the excessive production of the symbolic value and order of art itself through art events. The Busan Biennale 2008 attempts to highlight the aspect of expenditure and consumption, rather than excessive production, and furthermore the philosophical retrospection on the representative "type of art production" known as biennales.

Artist biographies are provided in the present catalogue.

Chapter headings
The Biennale, or the Use Value of Expenditure - KIM Wonbang, 김원방
Potlatch National - Michael COHEN
I MYSELF AM WAR - Nancy BARTON
Today's Imbalance of Expenditure and Infinity - Takashi AZUMAYA, 東屋隆司
Wishful Needs - Laurence A. RICKELS
Some Notes Towards Expenditure - Tom MORTON 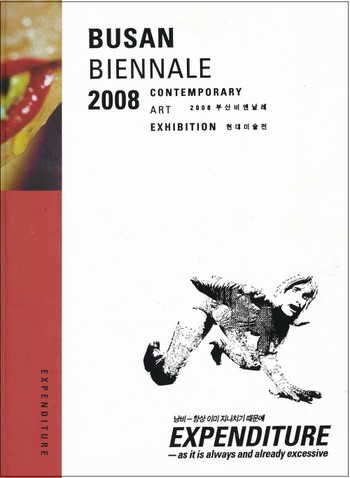 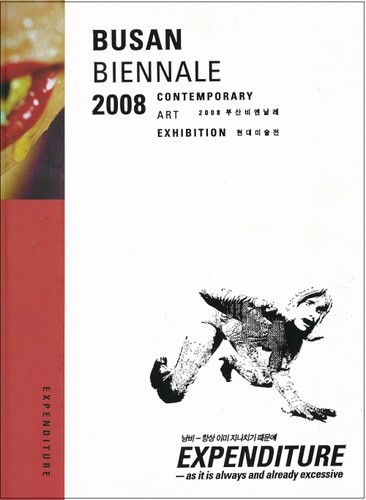