Catalogue of group exhibition by eleven Indian artists, held at Kunsthalle Wien in 2002.

'In the past decade India's metropolises have been caught in the grip of an enormous push towards globalisation. This abrupt internationalisation of capital, consumption, and media has also effected changes in the contexts of Indian contemporary art. Global television stations, commercials, the Internet, video and computer games, are becoming important points of reference. The relationships between world and nation, between individual and community, between politics, economy, and culture are being redefined.

The artists participating in the exhibition Capital & Karma confront these changes with varying strategies, transferring in this way the media surfaces of 'Indian' and 'Western' elements into a globalised context of symbols. Essays by international authors address the conflicting effects of the new flows of capital in art, popular culture, politics, and urban development, as well as in Indian cinema and other forms of mass media.' - extracted from back cover

Chapter headings
Capital & Karma: The Journeys of Wishes and Wares

Borders Without - Borders Within
Subject to Change: Reflections on Contemporary Indian Art

Towards a New Folkloric Imagination

Women and the City: Fashion, Desire and Dance in Popular Bombay Cinema 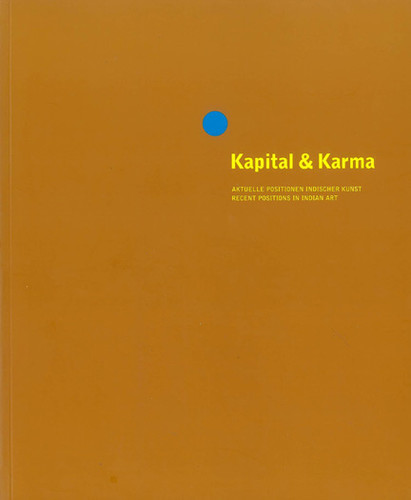