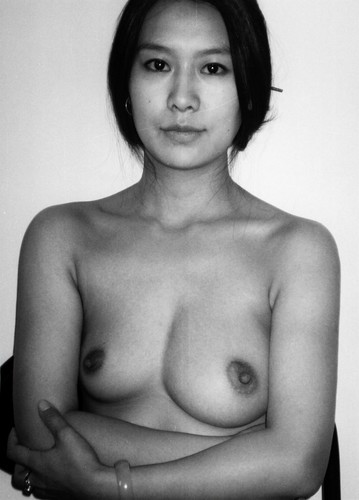 Excerpt from Inward Gazes: Documentaries of Chinese Performance Art 2012, The Macao Museum of Art, Macau S.A.R., 2012, p. 86: 'This picture was taken at 9:00 a.m. on the morning of 7 December 2011. Xiaofu was born on 7 July 2011. There is no difference between me and other women who have just given birth; changes occurred in my body as expected. I obstinately nursed my baby on my left side, and even stopped it from touching my right breast. Since stagnant milk was produced during the breastfeeding stage, my right breast started to swell: it was hard, becoming a tender spot. Later, I was diagnosed with mastitis, an infection in the breast tissue. Three months later, my right breast no longer produced any milk and due to the overgrowth of the mammary gland of my left breast, the difference in size between my left and right breasts has become much more obvious.'

The photograph was taken in Beijing, China.