'In Museum Skepticism, art historian David Carrier traces the birth, evolution, and decline of the public art museum as an institution meant to spark democratic debate and discussion. Carrier contends that since the inception of the public art museum during the French Revolution, its development has depended on growth: on the expansion of collections, particularly to include works representing non-European cultures, and on the proliferation of art museums around the globe. Arguing that this expansionist project has peaked, he asserts that art museums must now find new ways of making high art relevant to contemporary lives. Ideas and inspiration may be found, he suggests, in mass entertainment such as popular music and movies.
Carrier illuminates the public role of art museums by describing the ways they influence how art is seen: through their architecture, their collections, the narratives they offer museum visitors. He insists that an understanding of the art museum must take into account the roles of collectors, curators, and museum architects. Toward that end, he offers a series of case studies, showing how particular museums and their collections evolved. Among those who figure prominently are Baron Dominique Vivant Denon, the first director of the Louvre; Bernard Berenson, whose connoisseurship helped Isabella Stewart Gardner found her museum in Boston; Ernest Fenollosa, who assembled much of the Asian art collection now in the Museum of Fine Arts, Boston; Albert Barnes, the distinguished collector of modernist painting; and Richard Meier, architect of the J. Paul Getty Center in Los Angeles. Carrier’s learned consideration of what the art museum is and has been provides the basis for understanding the radical transformation of its public role now under way.' (back cover)
Access level

Chapter headings
'Beauty and Art, History and Fame and Power': On Entering the Louvre
Art and Power: Time Travel in the Museum
Museum Skeptics
Picturing Museum Skepticism
Art Museum Narratives
Isabella Stewart Gardner's Museum
Ernest Fenollosa's History of Asian Art
Albert Barnes's Foundation and the Place of Modernist Art within the Art Museum
The Display of Absolutely Contemporary Art in the J. Paul Getty Museum
The End of the Modern Public Art Museum: A Tale of Two Cities
Conclusion: What the Public Art Museum might Become 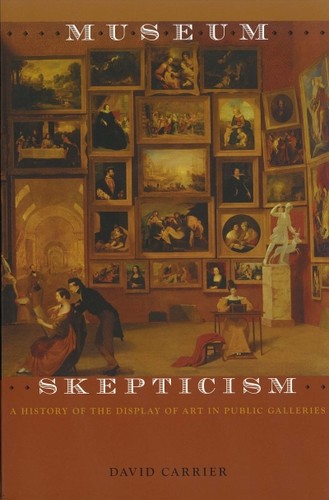